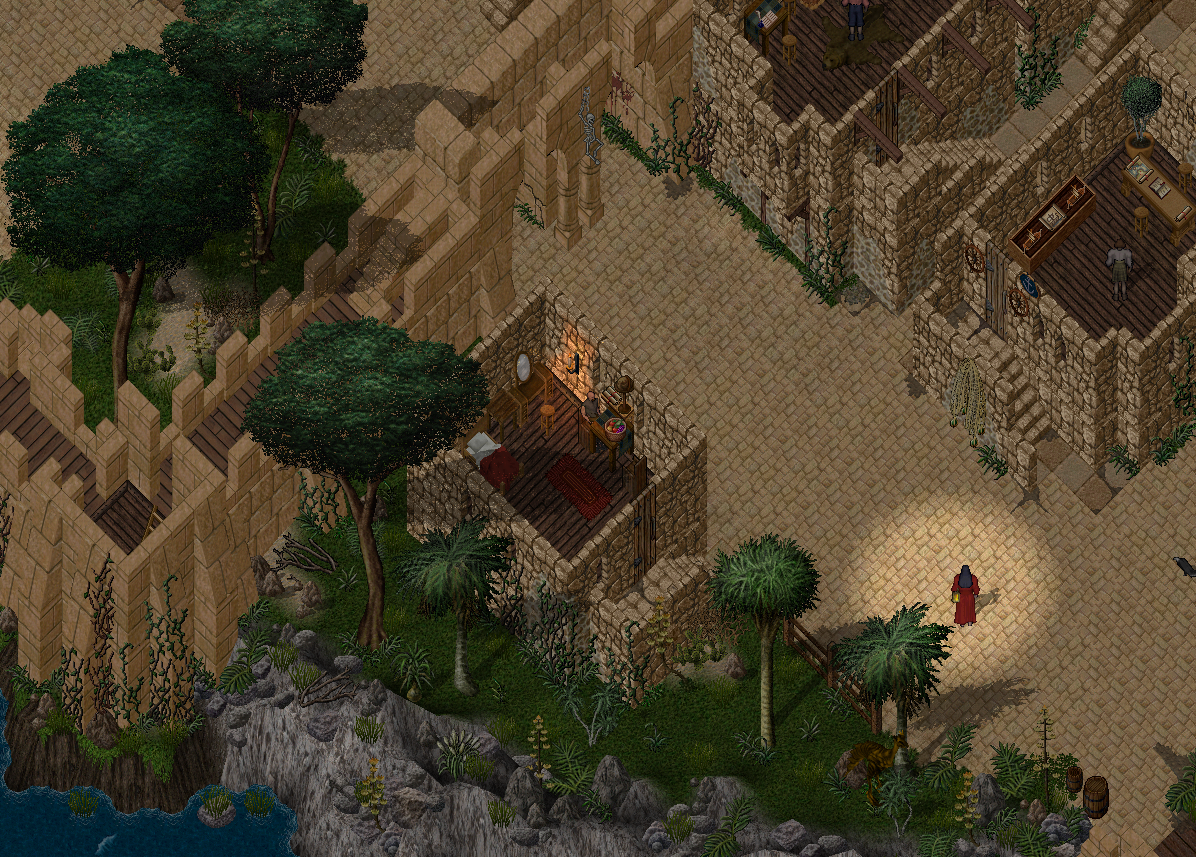 Standing slightly hidden by some tattered curtains, Tiamek gazed from his apartment window into the Cambrian streets of Southcorner.

“All praise the One, for he is Good!” a street preacher bellowed.

“Do the bloody preachers never sleep,” Tiamek muttered to himself as he slipped away from the window to write some notes on a piece of parchment.

He had been none too pleased when Lord De’Lartez had dispatched him here, but the mage thought he would be a good fit for the assignment. “Watch and report,” he recalled the mage instructing him before sending him on his way. “I want to know if anything out of the ordinary is going on.”

“Bah,” Tiamek growed to himself, bringing himself back into the moment “When is anything ever ordinary in Avadon?”

Thus far, nothing of note had really taken place. He heard the same cultists preaching of the One. He saw the same thieves swarming anyone who looked as if they might have more than a few pieces of gold in their pockets. Of course he smelled the same damn smell of fish wafting in from the harbor. Cambria, it seemed, was a bastion of consistency.

Tiamek poured himself a glass of Cambrian red, at least there was that, and contemplated why exactly Lord De’Lartez felt he would be a good candidate for this job.

He had grown up in Cambria. Not too long ago, he had been a young man surviving on whatever he could scrounge up. He had always excelled at tasks that required steady hands and nimble fingers. His parents had thought he might go far, perhaps as a tinker. It was that hope that led him to apprentice himself to one of the Cambrian tinkers after his parents died.

To his surprise, he did enjoy the work and found himself to have some talent for it. Unfortunately, Cambria is an expensive city and he had to learn other, less reputable skills in order to make ends meet.

It was those less reputable skills that brought him onto a crash course with the De’Lartez brothers. Had he known they were brothers, and one a mage, he would have found another mark. The fighter, Derek, looked slow-witted enough though, and at that moment had his hands full with a barmaid at one of the Cambrian taverns.

“Evenin’ Master,” Tiamek groveled, “spare a few pieces of gold for a meal?”

Derek looked at Tiamek with a friendly look and a slightly drunken smile. “Of course” He patted the barmaid on the bottom, “You’re gonna have to switch sides, this gentleman is in need of a hot meal.”

As the young woman giggled and bounced to Derek’s other leg, Tiamek deftly reached into the soldier's cloak pocket and relieved him of a brass key. Tiamek held his breath slightly as Derek reached into the very same pocket, but exhaled with relief when the man grabbed several gold coins and handed them to him.
“Many thanks m’lord”, Tiamek mumbled and trotted off.

He heard Derek address the barmaid as he went, “He MUST be starving, couldn’t wait to get to some hot food.”

Tiamek did not seek out a server, however. He immediately left the tavern and headed for the nearest inn. Most men chose not to drink any farther from their rooms than they had to, soldiers most of all.

Tiamek entered a nearby inn and nodded slightly to the innkeeper, but gave no opportunity for the man to question him. Heading upstairs immediately, he started working the key into the doors, hoping to find a match. After three attempts, Tiamek felt the satisfying click of the tumblers falling into place.

He took everything in as he entered the room. A saddlebag. A spare cloak hanging on a peg. A vicious looking axe propped in a corner. Tiamek shuddered at that, “All the more reason to get moving.” he muttered to himself.

After the briefest of moments, he found what he was looking for, a chest. It was locked of course, but that was no real impediment. As he set to work picking the locks, he froze.

“In Lor.” The room brightened immediately. Tiamek slowly turned to face the now open door. It was not the soldier he had been expecting. He was tall, with his hair in a braid over each shoulder. He held no weapon, but had an aura of power regardless.

“What have we here, a little mouse?”

To be continued...
K

Tiamek lounged in his chair by the window, reminiscing about his first encounter with Lord Kered De’Lartez. He had left bruised and battered, but with a new employer. He shook his head slightly as he settled deeper into his chair. A fair and worthy employer, without a doubt, but a hard man.

The warm breeze blowing through the window carried the mew of seagulls. The combination of the warmth and the hypnotic sound began to lull Tiamek into a light doze. Just as his body was preparing to nod off into a deeper sleep, he heard the sound of footsteps.

He slowly stood from the chair, tensing slightly. It could be anyone; a neighbor coming to call, a Follower of the One looking for a donation, even a courier from Lord De’Lartez. He watched the door, waiting. When he heard the scrape of metal sliding into the keyhole, he immediately began forming the words as he had been taught. 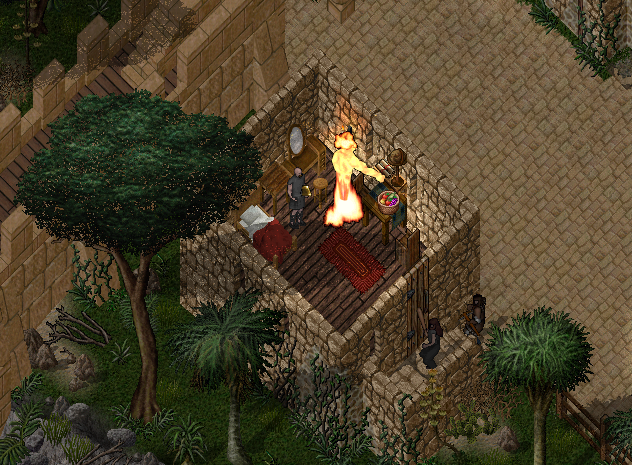 The lock on the door clicked and the door burst open violently. A rough looking man with a club sneered in the doorway. Tiamek smiled with anticipation as the man took a step forward.

The man’s eyes widened at the sound of the click, the only warning he would receive. 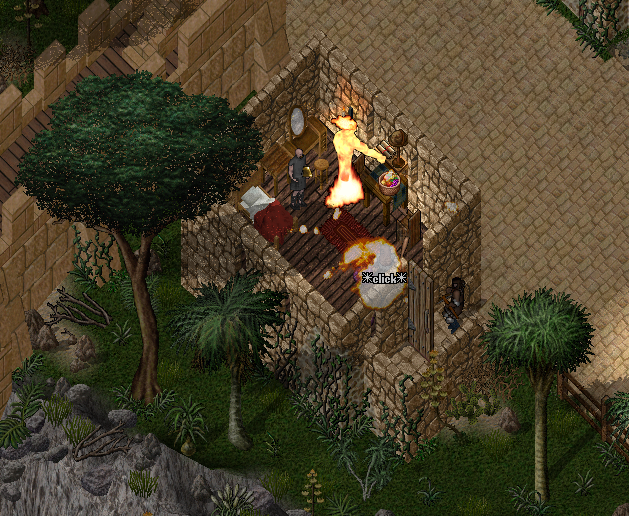 The brigand was thrown back out of the apartment and fell down from the second story with a thud as he hit the ground, moaning. Tiamek only had a second of mirth before a second man stepped into the doorway, crossbow ready to fire.

“Attack!” Tiamek ordered the fire elemental he had summoned. The man was hit by an epic barrage just as he fired the crossbow, grazing Tiamek’s shoulder. The epic barrage was followed by an explosion and then a flamestrike. He had not yet learned the art of dealing heavy damage with magery, but he had gained quite an affinity toward fire elementals.

Tiamek spoke the words of power, “In Vas Mani” and felt a wave of healing wash over him as he watched the man, fully on fire, try to reload.

Tiamek pondered at the persistence. Someone very powerful must have ordered this hit, else this man would not have put forth so much effort. Still, a man could only take so much. Finally succumbing to the burning pain, the man threw down the crossbow and ran.

“Well,” Tiamek said casually to the fire elemental, “I suppose the time for lying low has passed.” The elemental did not respond. They rarely did. He examined the ruined entryway.

“For that matter, I would say my time in Cambria has come to an end as well. At least for now.”

With that, Tiamek gathered his things and walked to the stable to retrieve his ostard.

An hour or so later, Tiamek magically appeared before a stone and plaster lookout near Horseshoe Bay. He entered and found Deltor, another of Lord De”Lartez’ men staring at a large boxy chest.

“Found this being guarded by a corpse purger in The Mausoleum. Paragon I think.” Deltor said, looking expectantly at Tiamek. “Can you open it?”