Below is the beginning of Outlands' lore timeline. Further snippets of information and stories will be posted here leading up to and following server launch. Some information will be released in in-game lore books only, including the full lore timeline, taking us from the creation story below (0AC - After Cataclysm) to the current day in 612AC. Future lore pages and books will be released as the history that the players write with their in-game actions forms the guide for the evolving shard story.

The Ultima Online Lore, (as opposed to Ultima Lore in general) has been the guide for much of the lore written to date (there is something of a distinction between the two), and many of the major characters such as the Shadowlords and Mondain feature, alongside a wealth of custom Outlands specific lore and characters. The Shadowlords in particular are likely to take a very active role in post-release story arcs. 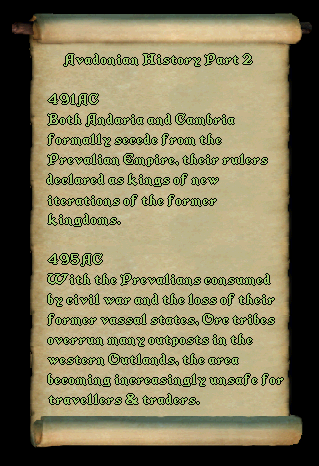 In an act of inordinate wizardry, the malevolent sorcerer Mondain converted the Sun Ruby into the Black Gem of Immortality, containing an exact replica of Sosaria within it. This multi-faceted gem granted Mondain eternal life and power, and had to be destroyed before Mondain himself could be slain.

During the titanic struggle between Mondain and the Stranger, high in Mondain's Keep, a mighty blow from the Stranger’s sword landed square onto the Black Gem, which shattered into many shards and vanquished the evil sorcerer.

The shattering of the Gem of Immortality caused each piece to contain a mirror image of the original Sosaria, creating what we call shards today. The single gem shard that lay closest to Mondain as he lay breathing his last became the most corrupted, as with his fading power he imbued the shard with all of his remaining malice.

Within this shard, Mondain's swirling evil energy caused the death of his executioner, the Stranger, as well as Mondain's lover Minax and their creation Exodus. As the ripples of evil spread across the lands, mutating creature and man alike, Lord British abandoned the shard, escaping through a black moongate, believing the realm to be an irreparable loss.

As the evil energy soared beyond conceivable levels, the events that followed within the gem shard shortly after were nothing short of calamitous: major land shifts, hostile volcanic eruptions, the melting of polar ice caps, and gargantuan earthquakes which scarred the land. The entire globe became a scene of utter devastation.

This single shard has come to be known as Avadon, or as it is more commonly referred to - “the Outlands.”

As Mondain’s dark energy began to dissipate, it is believed to have been absorbed into three of those shards, leaving them corrupted by falsehood, hatred, and cowardice. And from this union of mortal cruor and Mondain's magic, the Shadowlords were born: Faulinei, Shadowlord of Falsehood; Astaroth, Shadowlord of Hatred; and Nosfentor, Shadowlord of Cowardice.
Last edited by a moderator: Sep 19, 2018

Lenz said:
The single gem shard that lay closest to Mondain as he lay breathing his last became the most corrupted, as with his fading power he imbued the shard with all of his remaining malice.
Click to expand...