This thread is to act as a more comprehensive breakdown of the "Tightened Damage Ranges" section of this post.

UO Outlands mechanics are loosely based on T2A-era combat, which inherently involve a certain degree of RNG. It is my position, however, that with current formulas, far too much variance is seen in damage values assigned to specific activities. Paired with hit rate randomness, these external factors are too often pulling a would-be neutral fight too wildly in one direction.

For the purposes of standardization, all of the below ranges are calculated using 7x tank mage on 7x tank mage interactions.
I find the below to be most notable:

Zooming out, how much sense does it it make for a "burst" weapon to hypothetically deal 25% of its maximum value on a given hit?
For a fifth circle spell's low end value to be 47% of its high end?
For something as integral to PvP as EB is, to land anywhere between 18 and 31?
For interrupts and match-finishing spells to vary as wildly as they do?
For a hally + FS to leave an opponent with 2 hp remaining?

a sidenote, stemming from Limo hitting someone w/ a warfork in a tournament for a grand total of 3.0 damage:

Staff member
Agreed. I am all for less RNG in PvP overall, so I would love to see the damage ranges tightened. The lack of predictability limits possibilities in my mind. It's also a bit strange that healing is consistent but damage varies wildly. Why don't we get 30 damage gheals?

It's also simply frustrating to die to an unexpected 40+ damage halberd and it doesn't feel good to win with one either. (Maybe once, but it gets old fast)
R

Agree. in my opinion the weapons dmg window is the most important fix many pvppers are asking since... I guess more than 1 year ago.
If I well remember they are not doing fixing it because it will basically be a tsunami for the pvm players (all the dps balanced would be messed).
I suppose that just change the rolls of weapons only during pvp flag should be a solution, but maybe they have different reasons for leave them funny like they are now.

Fix these "funny swings" will make the pvp more predictble (more skill based) but ppl would be more difficult to kill in 1vs1.

For prevent this there are other core balances that we need imo, but i don't wanna be offtopic (MR.. LOWDEX swingspeed..BANDAGES..).

Very much agreed. I love roguelikes and variance is a wonderful gameplay design tool, but its a detriment when it becomes too large in a competitive setting. You get to a point where where lucky rolls can overshadow player skill. I understand that the damage is probably tied to a bunch of PvM damage calculations, so the easiest is probably to separate the calculations entirely between PvP and PvM. UO PvP (excluding a group setting) basically revolves around everyone having a relatively small health pool and few damage mitigation possibilities - but with significant healing that can be interrupted. The whole central mechanic of UO PvP is producing burst damage that either outdoes the healing, or interrupts the heal. Limiting the variance of burst damage would provide more matches with larger opportunities for counterplay.
Last edited: Jun 20, 2022

Just wondering if any consideration was given to making changes @Luthius ?

clx said:
Just wondering if any consideration was given to making changes @Luthius ?
Click to expand...

Yeah I've had several PMs with Luther and the people in this post about the reasons we currently have the ranges we have for weapons and spells, and why I'm not sure it makes sense to tighten them
L 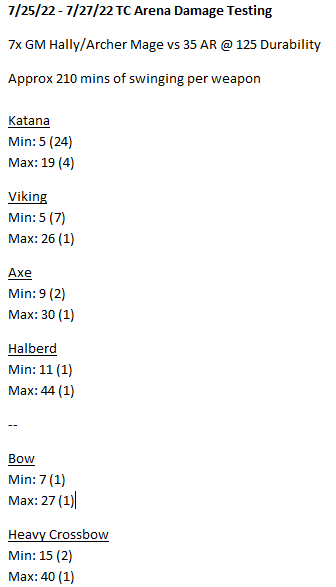 most interesting, perhaps, was the propensity for absolute low end dmg in comparison to the highs.
the data suggests that a 5 dmg katana is 6x as likely to land as compared to 19 dmg.

this did not apply to the archery section, however
R

Tightening the weapons' damage would make them less frustrating and more skill based.

As a Tamer, Pets are a constant flow of damage--one's always getting something--since there are multiple damage sources. However, there are no noticeable, pleasant, high-end damage hits (which may give the Tamer a momentary edge), since their damage has little variance.

Would relieve attacks in this game being abnormally frustrating due to missing half the time.

Another abnormality is having to wait 10 seconds to move upon stealthing (which is tedious). I'm sure that's the reason why stealthers are the least popular PvM builds. (Smoke Bombs relieved this a little, I guess.)
You must log in or register to reply here.
Share:
Facebook Twitter Email Share Link
Menu
Log in
Register