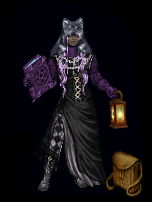 Some may prefer the sound of a blade slicing flesh or the anchoring of bolts through what seemed to be a well-made suit of armor. Mikaela, however, found comfort roaming the lands of Avadon, allying with the beasts she met along her travels and aiding others. Her short stature seldom matched her outspoken and bold nature. Well respected for her honesty and compassion, she strived to pay homage to all the virtues.

The little history she knew of her family stemmed from another land. Her mother shared stories of a place known as Cove. Many had allied together; the riches of trade and prosperity were shared by all. What their fate was, and how her family had arrived in Avadon, is unknown to her. In these lands, the only thing of familiarity had been the importance of the Virtues; born from the principles of Truth, Love and Courage.

Compassion, Honesty, Honor, Humility, Justice, Sacrifice, Spirituality and Valor. Mikaela recited them religiously, reflecting on and embracing each. Having set out on her own, she encountered the Knight’s Guild. Together they answered calls for help and eventually, the Beastmistress had joined their ranks. As time passed, the guild felt more like a family than friends. Their numbers alone were small, but together with powerful allies, much could be accomplished.

Much of her time had been spent on improving the state of things in Hailstone. The barracks had to be renovated top to bottom in preparation for new recruits. Strange disturbances in the bowels of Inferno required further investigation. Several new adventurers had joined the ranks and needed to be trained. A public library for all travelers to utilize was to be erected in a fortnight. And through all these experiences, small instances of distrust and misfortune took root.

Turmoil amongst allies and neglect from some of the other knights worsened. News of unthinkable happenings that took place one eve, travelled far. Perhaps she was always just mad, or maybe it had something to do with the strange occurrences in these lands... At the end of it all, Mikaela Darkmoon began to lose faith in her beloved Virtues.


Memories of one particular evening plagued her thoughts, repeating as if it were occurring again. Her Captain had left them, his calm and composed demeanor forgotten in the shock of it all. An unknown Sergeant appeared, malice glistening in his eyes; another perfidious snake. Allies that were called in to assist had been mercilessly slain and nothing to show for it aside from the pools of blood in their wake, soaking through your boots and staining your skin.

Several moons passed before any semblance of a resolution came of it all. The combination of events were treated like everything else, swept away and ignored. Failed attempts to entice her with absurd and close minded accusations were comical at the very least. Disgust, for the disregard of slayed innocents and the mistreatment of her Captain, coupled with a desire for retribution was birthed from those events.

No future with these Knights seemed fruitful now. Her fond memories sunk to the reality of it all. With the final word of the remaining Captain, and no positive outcome from anything, Mikaela unceremoniously discarded her Knights signet alongside her Captains and abandoned her mission with them.

Upon her departure, she received some news. A look of disappointment crossed her face; they had sealed the doors of the Library from the public. She realized any warmth Hailstone provided in the past, all the memories of the good they had done to help others and foster a healthy community, were all fizzling away.


Over time, Mikaela became more reclusive in nature, avoiding the noise of others. Finding solace in her seclusion and further losing herself to her ominous path. Memories of the bloodshed and dishonor clouded her mind: she no longer had faith in the Virtues she once upheld. Her lips moved, a whisper leaving them as she repeated to herself, “Chaos, Vengeance, Retribution. Chaos... Chaos and Retribution... Vengeance…”

“If Justice cannot be upheld, then Chaos must reign and someone must deliver undue retribution,” she growled as her face contorted with a scowl.

She repeated this like a sacred text. Embroidering it on blood stained scraps of cloth and tucking them in her corset with care. She would often reflect on them. Pulling stray fibers from the edges, as if counting her prayers; but instead muttering, “vengeance,” to herself.

Her ravings began to reach the ears of her past companions. With a grimace and furrowed brows, she chanted again..

“If Justice cannot be upheld... Chaos must reign... someone must deliver undue retribution. The guilty must be judged by someone.”

Mikaela Darkmoon had been lost to what can only be conceived as pure, unfiltered madness, and in her place Judge Vengeance emerged.