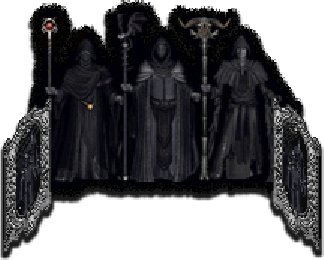 Get into the Halloween spirit with this autumn's House Decoration Contest! Design the most Haunted looking house to win special prizes! If you would like to enter, please read the information below:

On an evening like so many others, in a forest not far from you, dearest Reader... a man is enjoying his evening stroll...

After hours of wandering... darkness creeps into the deep woods... much sooner than our friend anticipated.... 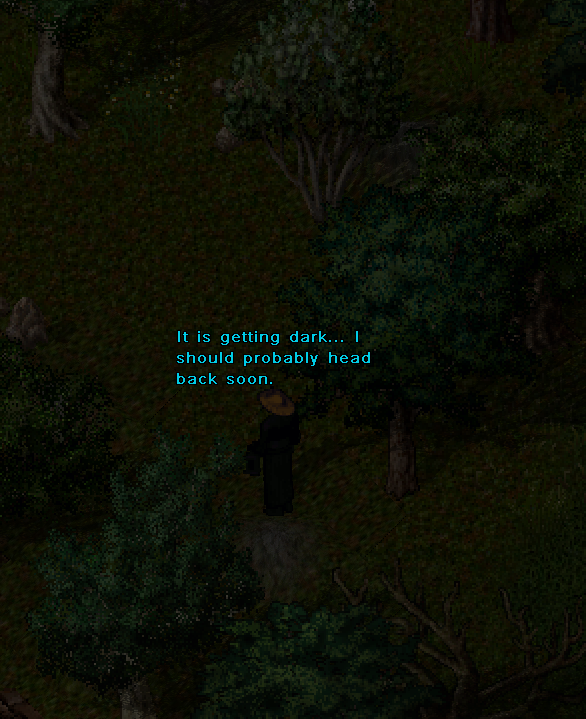 Suddenly... in a little clearing... the man spots a little girl, standing quietly... staring... why could such a young child possibly be out here alone? 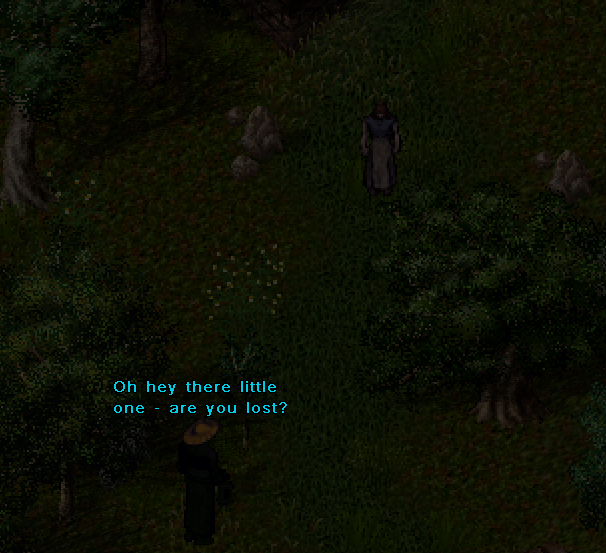 After a few seconds, the girl suddenly turns and runs away from the man... he can hear her laughter through the darkness...

At last he catches up with her and finds her standing in front of an old, ruined and forsaken house. Worried, he approaches her. 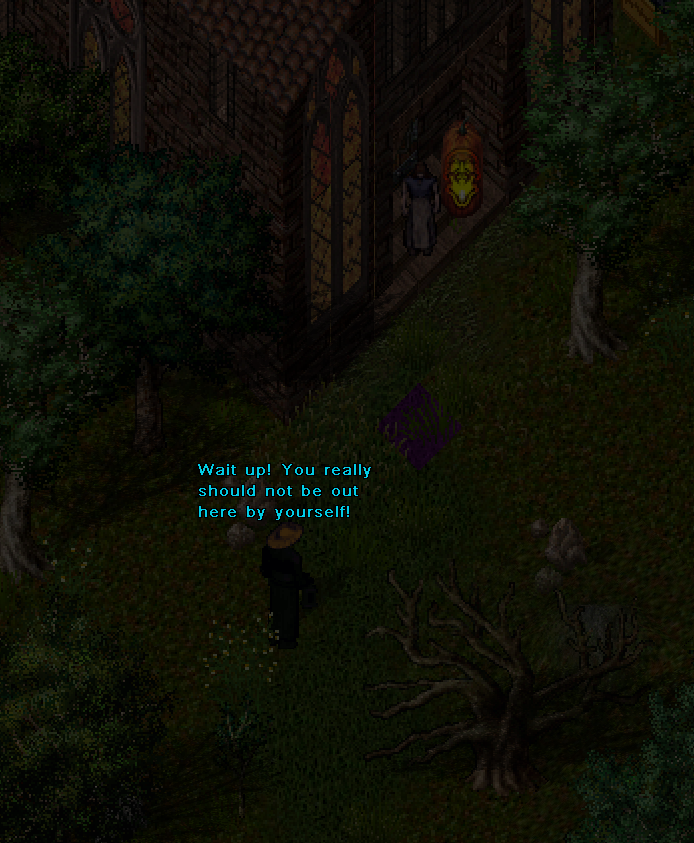 But yet again she laughs, turns around, opens the creaking door to the decrepit house and runs inside! 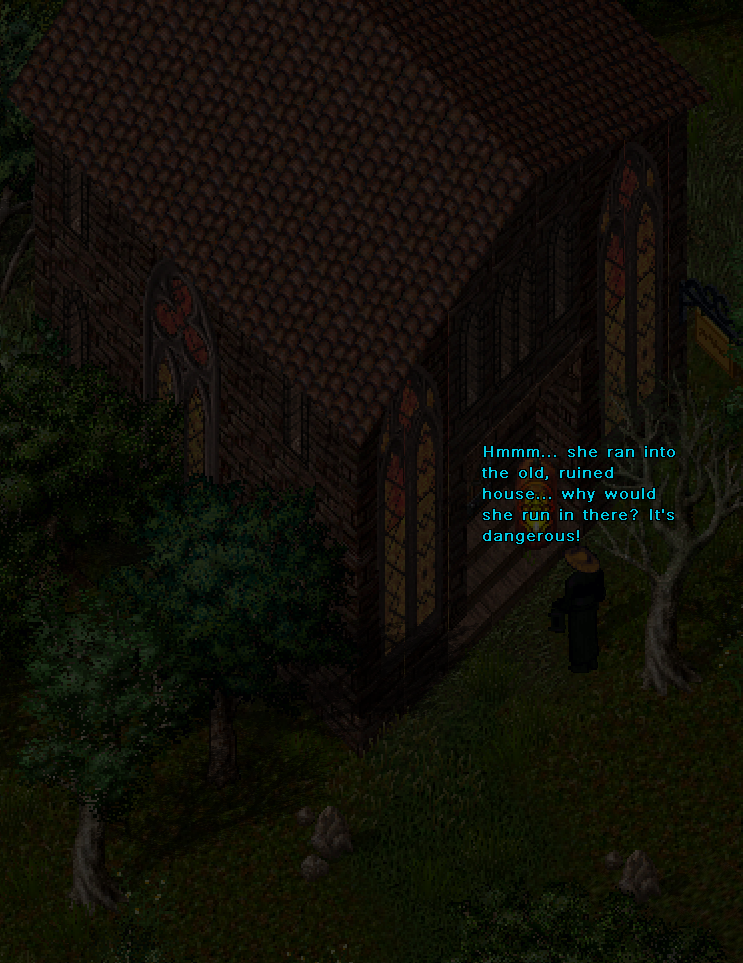 The man follows her only to find himself engulfed in thick darkness... he can barely see anything but as he takes his first steps into the house.... 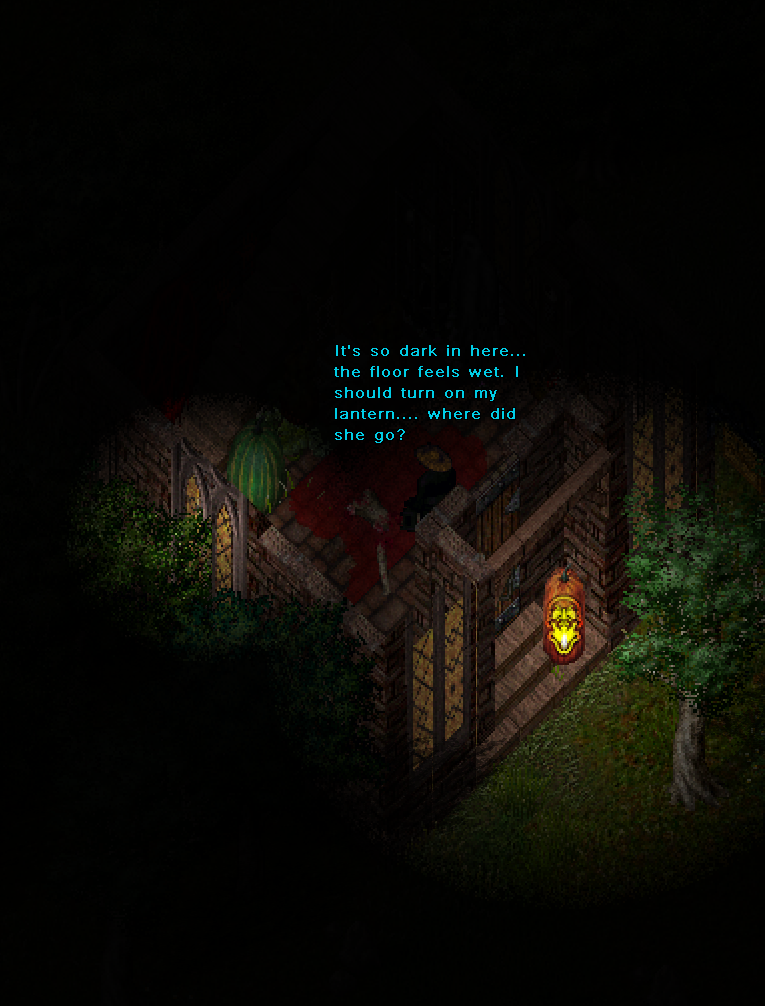 The horror! A mutilated corpse lies in front of him on the floor, its head and arms missing. The floor is soaked in blood! 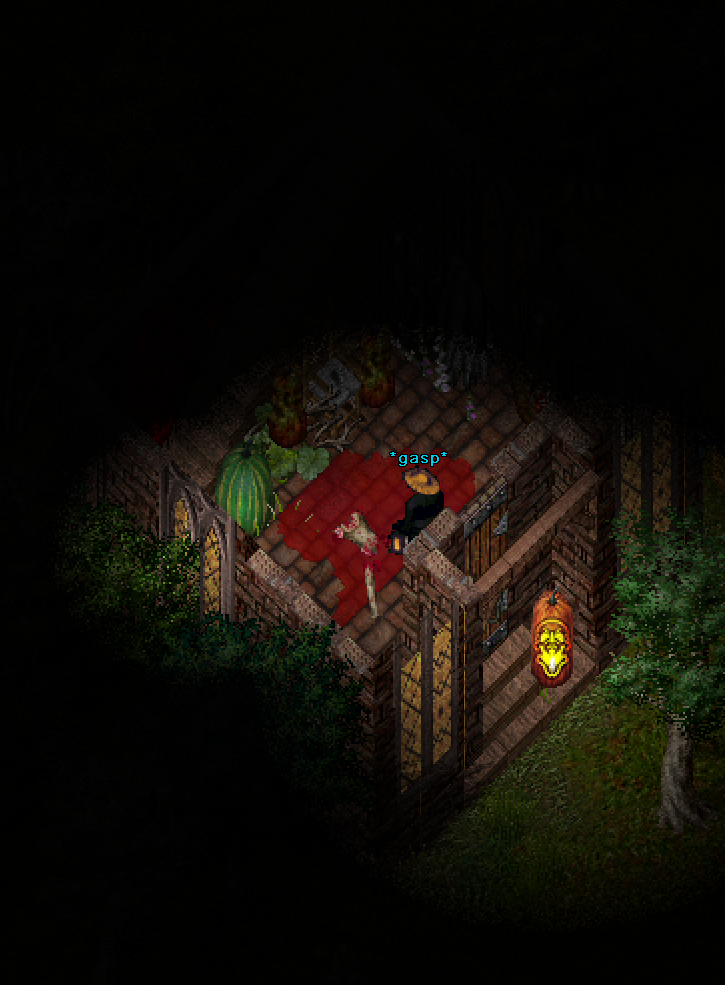 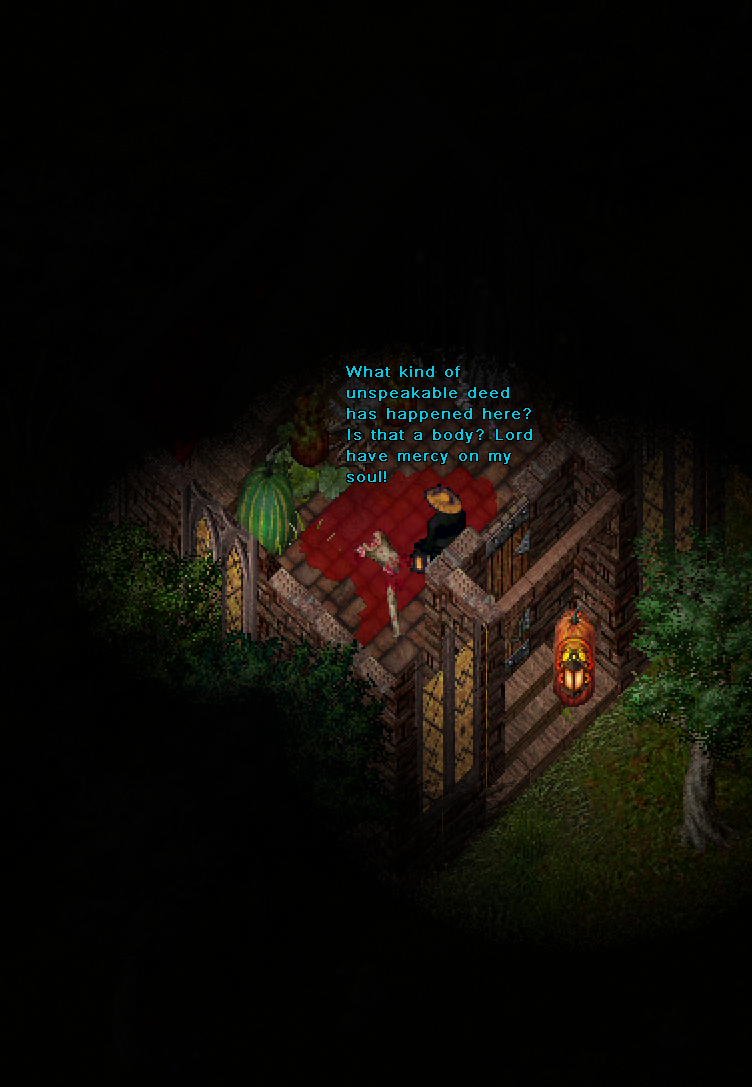 A sudden noise startles the man. He can see something move in the corner of his eyes! Was it the little girl? 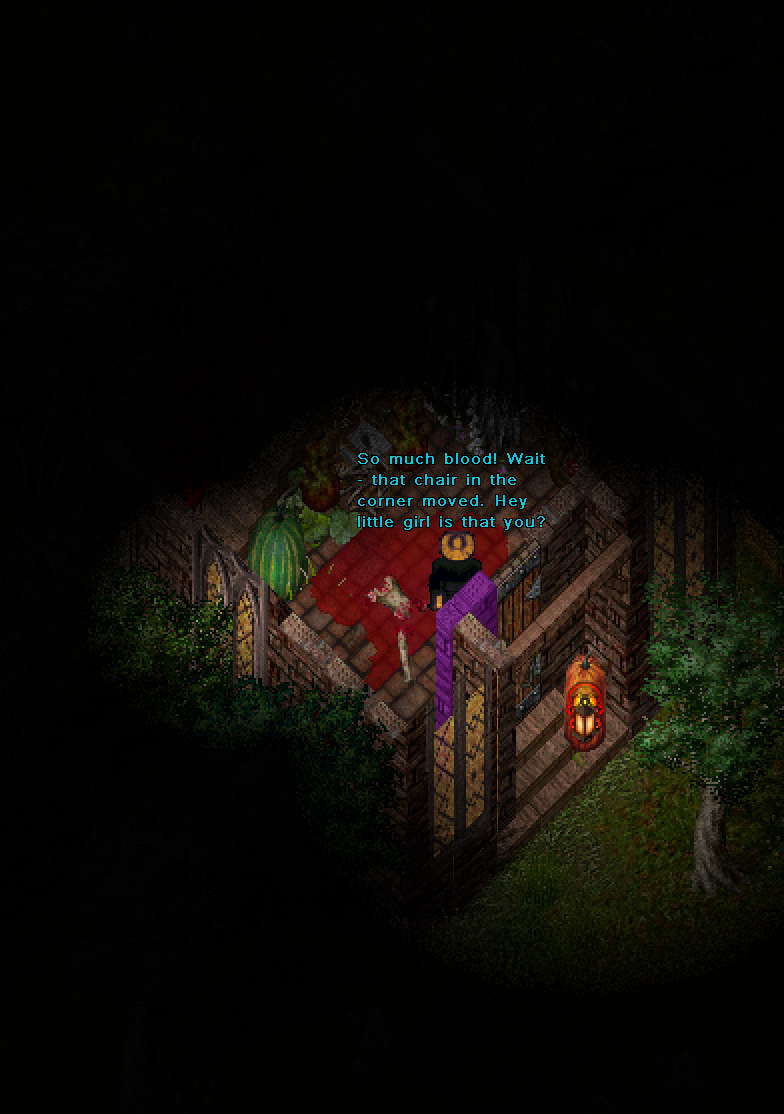 He has to help her. Why oh why did she run into this house, she must be so scared! 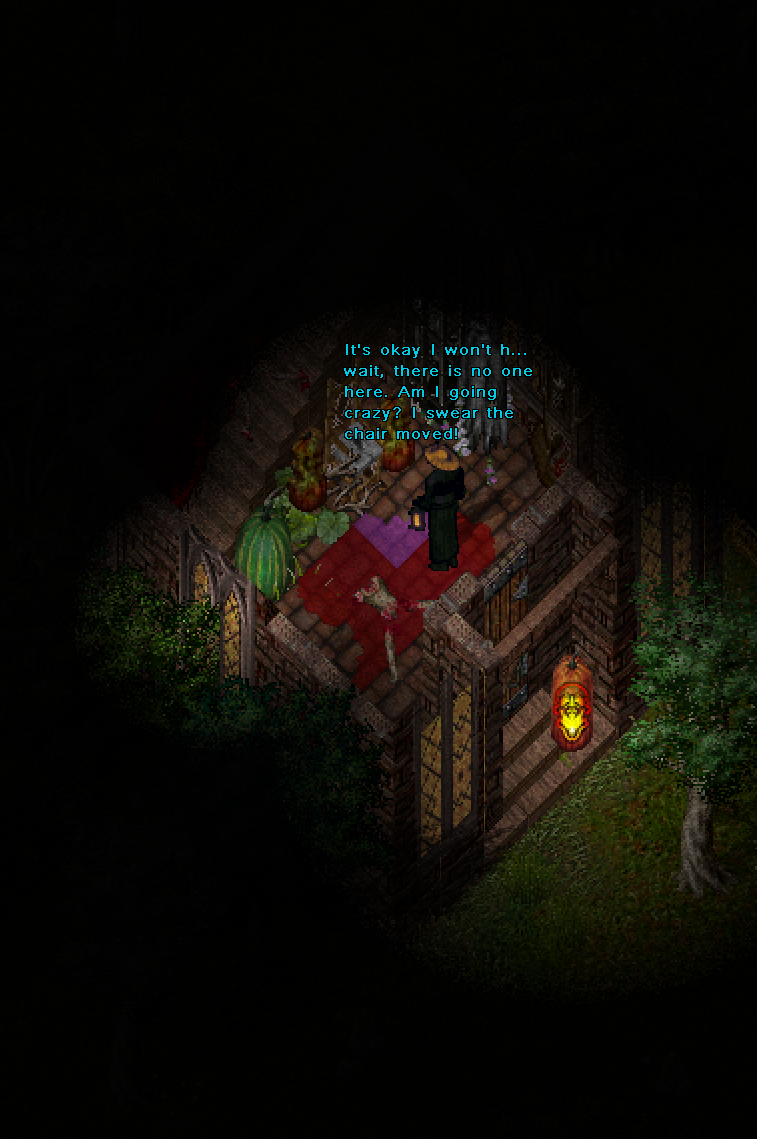 Suddenly a shape forms beside him! An apparition... a ghost? He screams... but the ghost does not move... only his "lips" seem to move... it makes no sound. 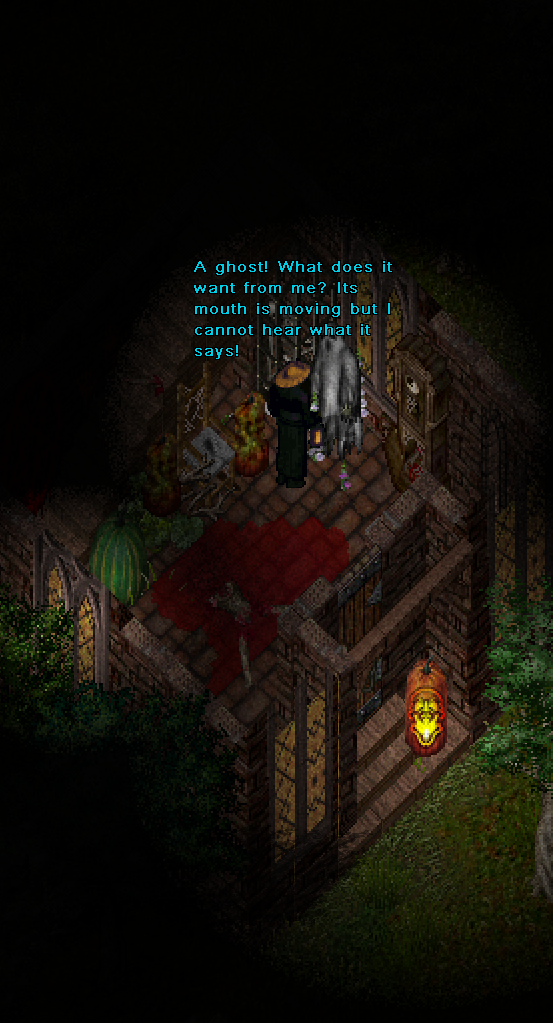 The girl! Where is the girl? He has to save her from this nightmare! As he makes his way upstairs he makes another frightening discovery.
A pentagram drawn with blood... two bloody hand prints next to it... and two, bloody arms lieing on the stairs.... 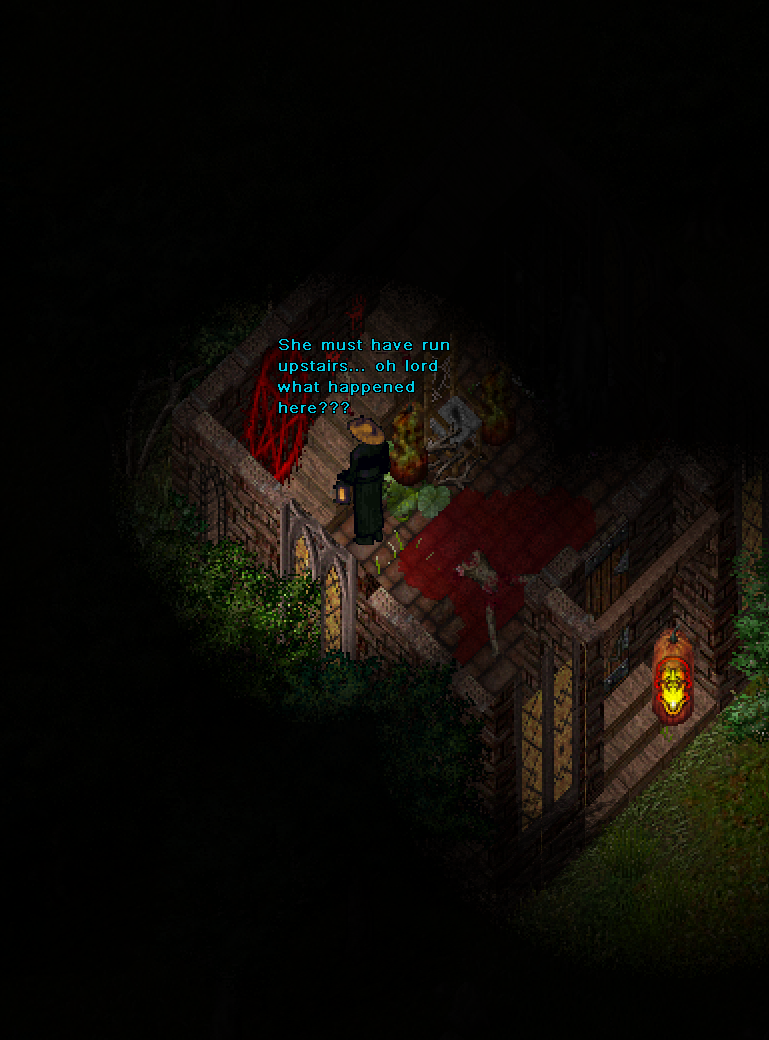 He races up the stairs, his heart is pounding... the girl... where is the girl!? As he reaches the top of the stairs he notices a menacing black figure - sitting on a throne made of flesh and bones. 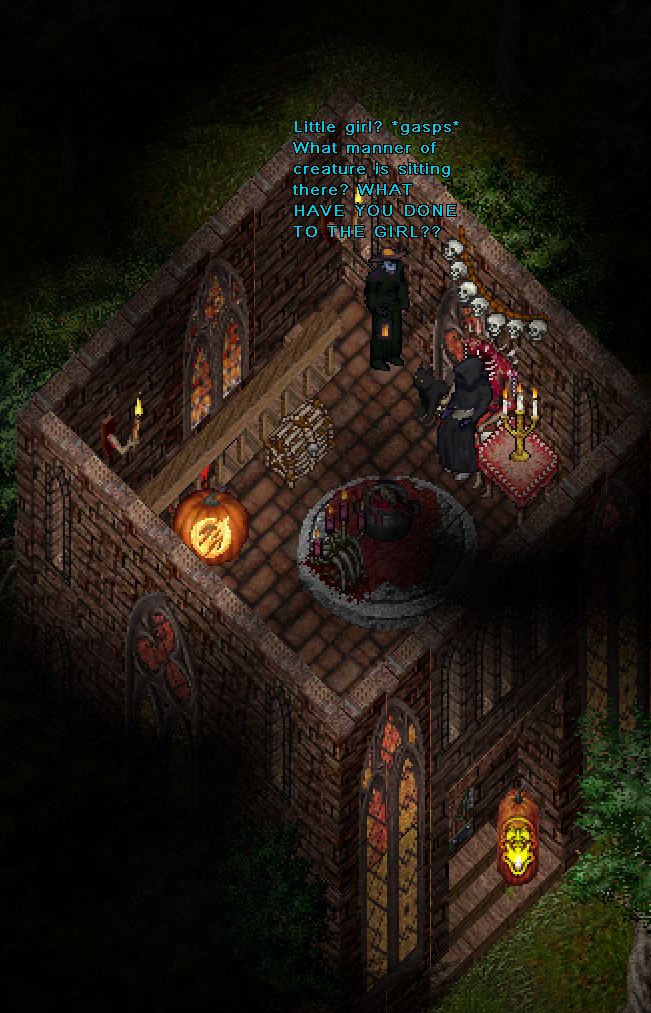 Are those skulls... human? A cauldron is placed in the middle of the upstairs room... thick red liquid bubbles inside of it...
Then, the creature speaks... and a chill runs down the man's spine as the voice cuts through the night. 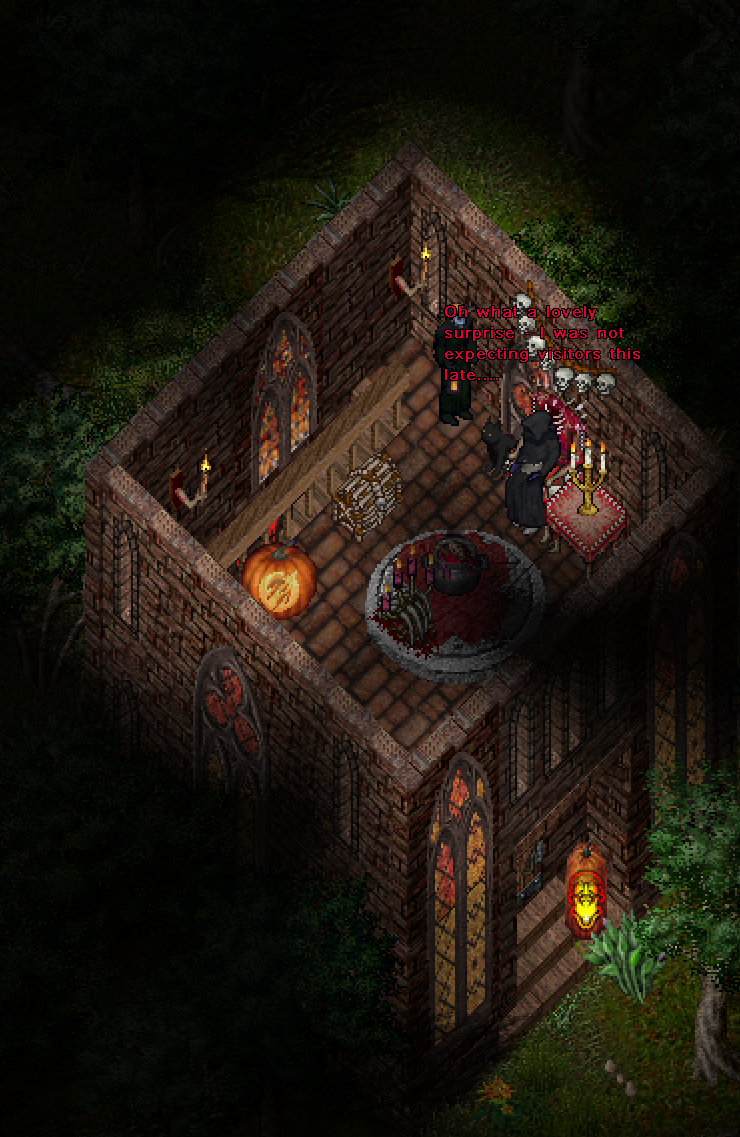 This cannot be happening - the man is panicking now. His eyes dart around the room... no sign of the girl. This is impossible!
A chest made entirely of human bones is placed near the bloody cauldron... and he could swear he saw something floating in the thick, red liquid.... 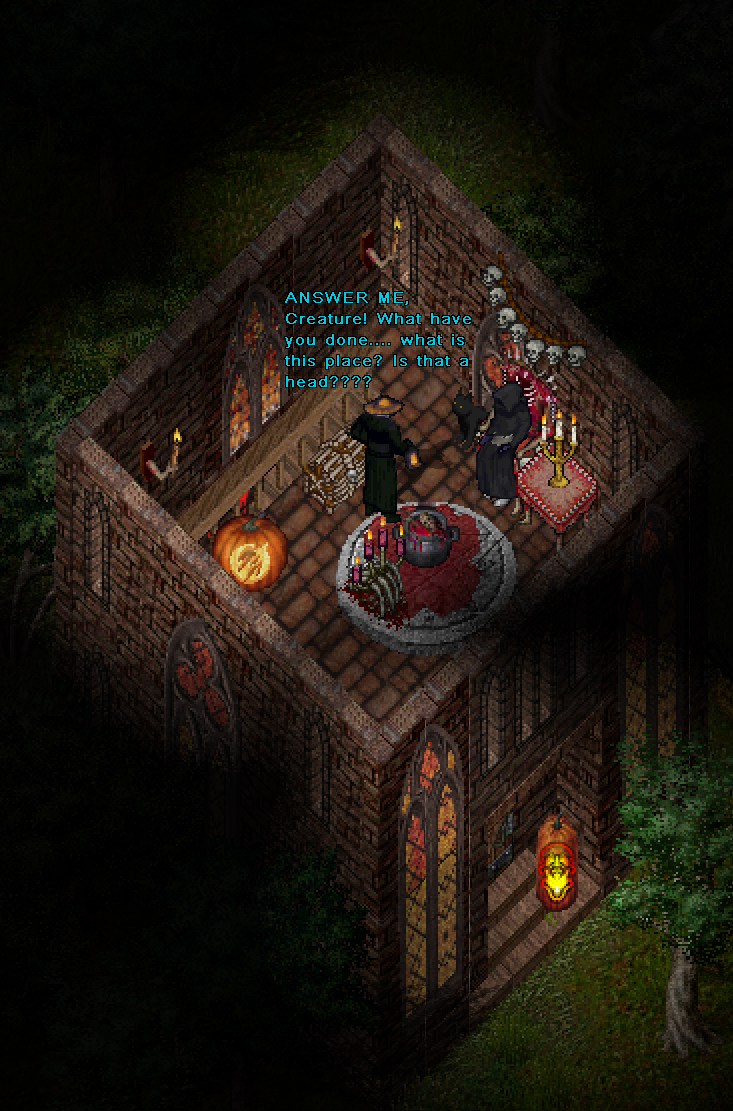 Then, the creature speaks again.... the chill in its voice paralyzes the man... he wants to run but as if struck by the hand of fear... he cannot move.
The creature stands up, it is much taller than it looked... so much taller. The last thing his mortal self hears is the muttering of an evil incantation.
Then the darkness takes him. 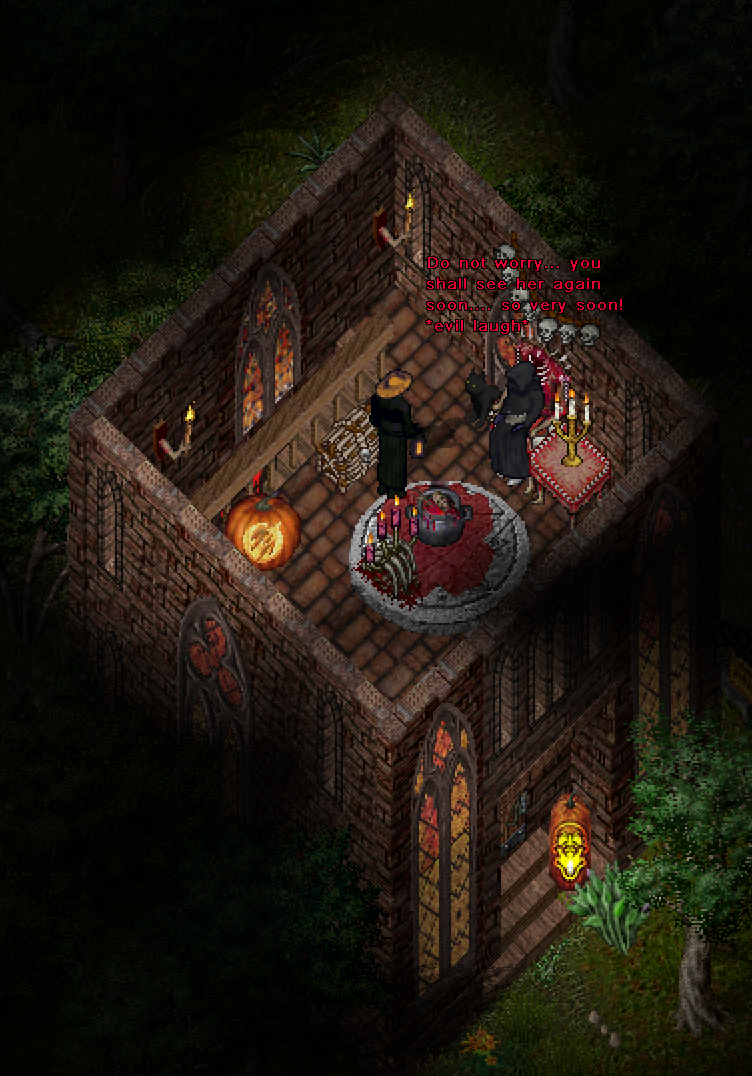 He opens his eyes... he recognises this place... somehow... from somewhere... from somewhen? The world looks different to him now.
A misty grey fog is all around him, blurring his vision... he looks down his hands but sees right through them... a familiar looking man approaches him... 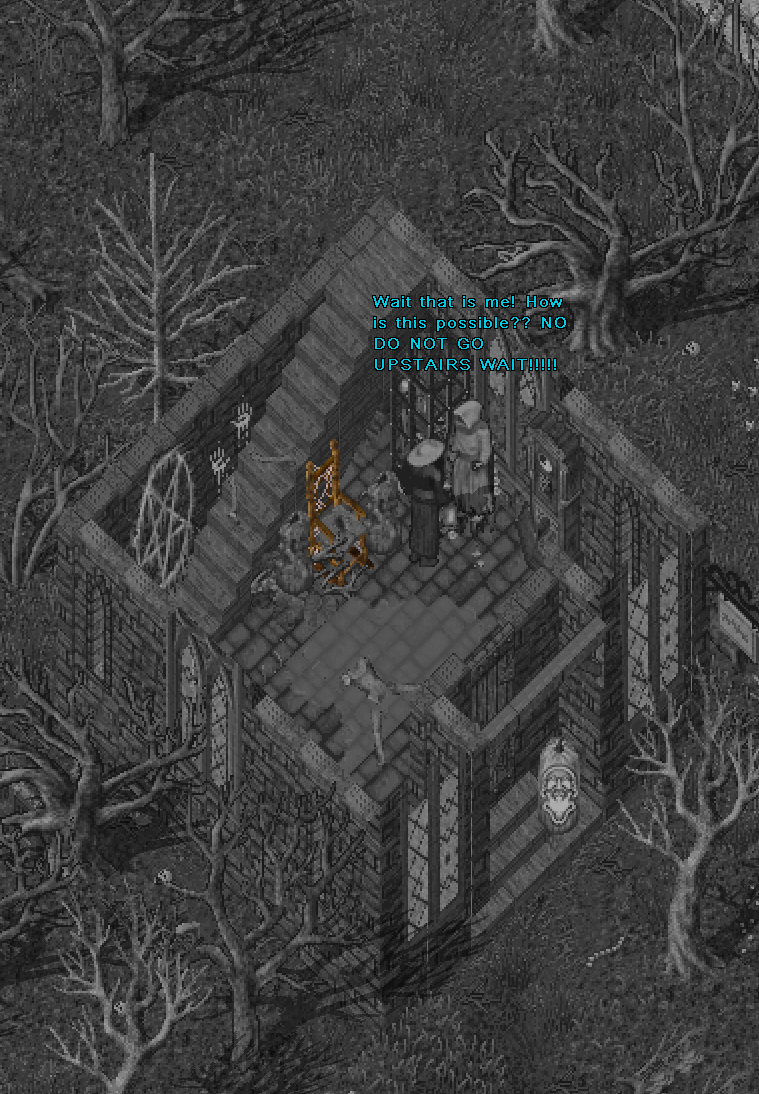 
I hope you enjoyed this little story - it is the first time I participated in this contest or any contest like this!

"Behind the scenes look" of the House and its decoration: 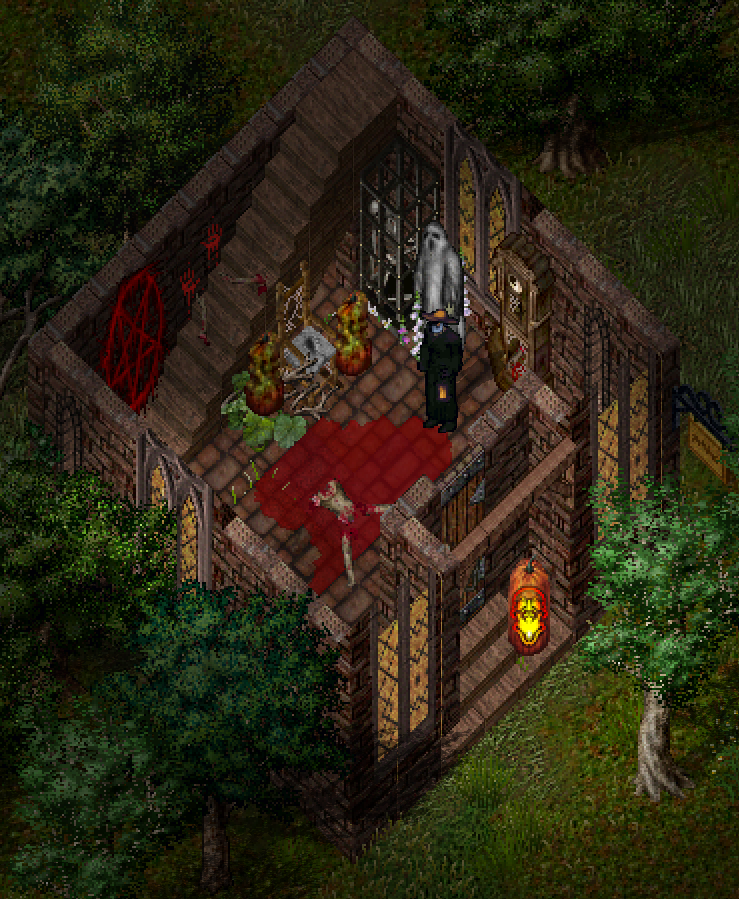 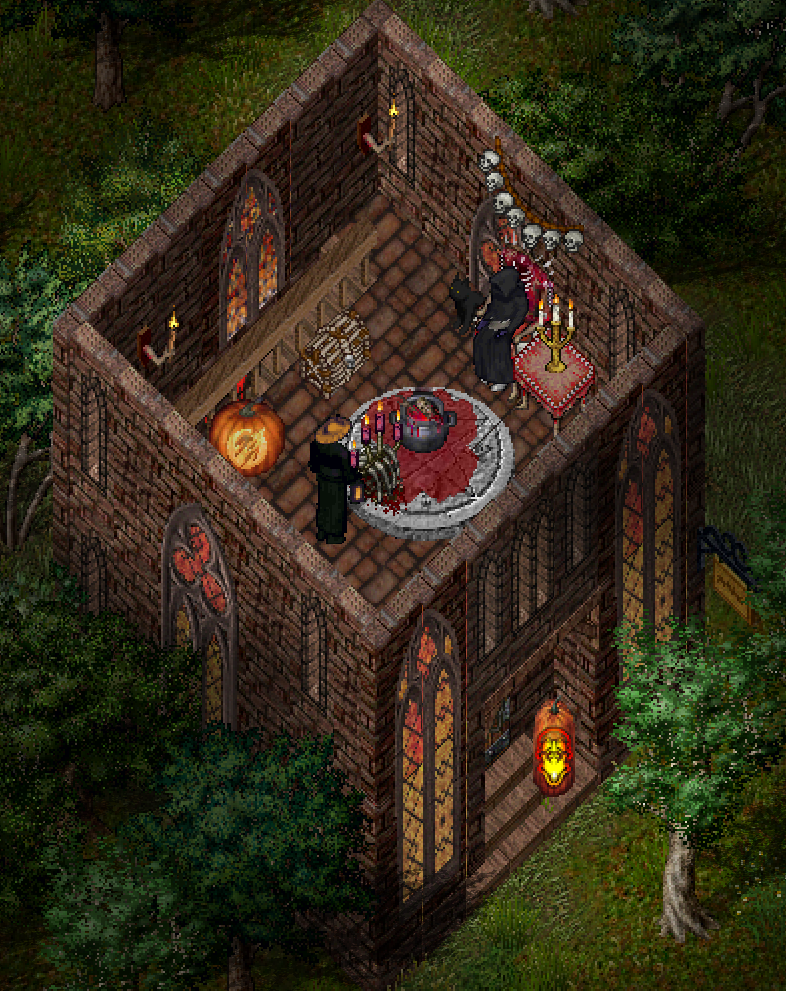 Staff Member
A report has been filed to the Prevalian Guard Authority about multiple cases of brutal murders in the poverty stricken South Prevalia. Each murder has happened by night, and has followed a similar pattern of gruesome mutilation with eyes, ears and the rest of the face missing, not to mention that the entire victims have been cut in half in ways that defy any known ways of sorcery or medieval science. Citizens of or visitors to South Prevalia are encouraged to stay inside during nighttime, and to avoid traveling alone.

A request for assistance in this investigation has been sent to Cambria, as Zahazar the Curator of the Royal Cambrian Museum is known to possess extensive knowledge about the world of mysterious events. The aid has been delayed so far, due to the Curator being occupied with another interior decoration assignment and has spent alot of time looking for her long time friend, Buckminster of Prevalia, who vanished after falling ill.
Last edited: Yesterday at 9:55 AM
You must log in or register to reply here.
Share:
Facebook Twitter Email Link
Menu
Log in
Register