Hail! This guide will help new players start out on Outlands and start making decent gold in fun, active, and diverse ways. The idea is that this build will allow you to make gold for whatever other characters you WANT to build, that take gold to build! (Such as a mage!)

This character is a tamer... but also a dexxer... and also a lockpicker. The idea is to maximize gold, damage, and routes you could take. Once you hit 700 skill points on this char, you may want to start dwindling down to a final build that is 7x, or you can just get rid of a few skills and run multiple at 80 skill. It's all up to you, and what you want to kill.

Let's get right to it! *Queue's Stones in the background" 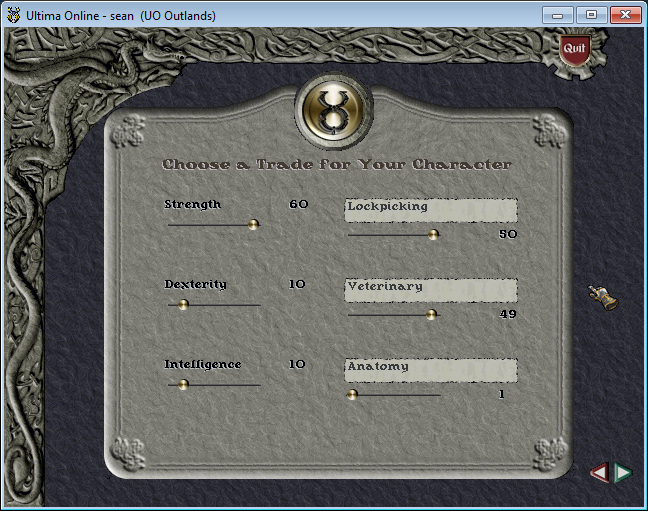 I started the character with these skills. Lockpicking gives you the newbie remove trap and lockpicks -- 200 durability total for each skill. Vet and anatomy gives you a total of 225 bandages, so we don't have to fight over sheep just yet. If it's allowed (I'm not sure if it is), you can start throw away characters with Anat, Vet, and Healing for 300 bandages and trade them to new characters. 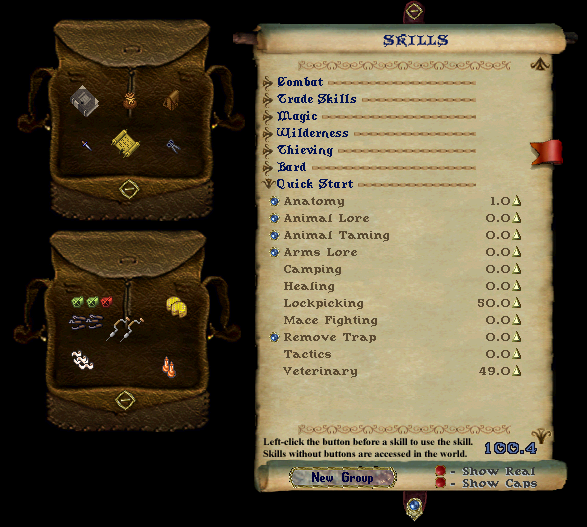 I leave all skills facing up -- because until we're at 700 skill points, all skills can only help. This is essentially the build that we will be running. I threw camping in there because, although I don't train it in this guide, it's an extremely useful skill, especially for dexxers.

Next I ran directly to the animal trainer and the thief to train animal taming and remove trap. 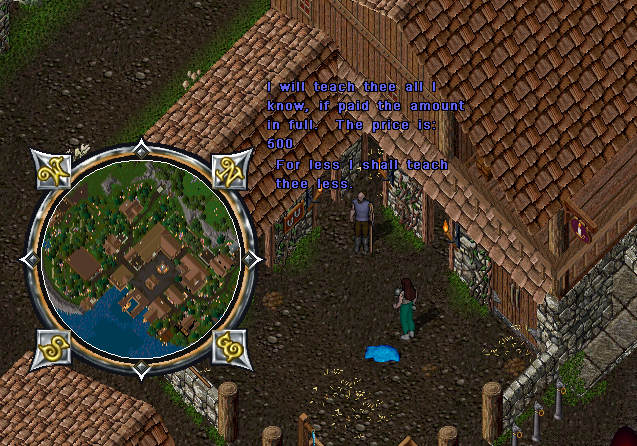 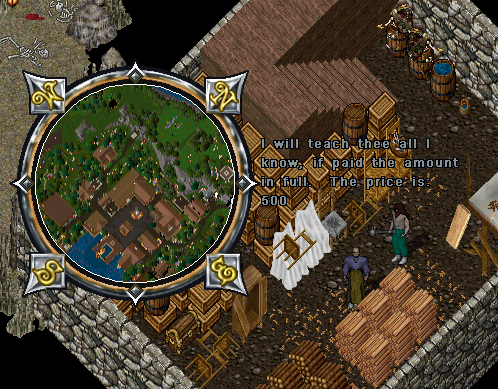 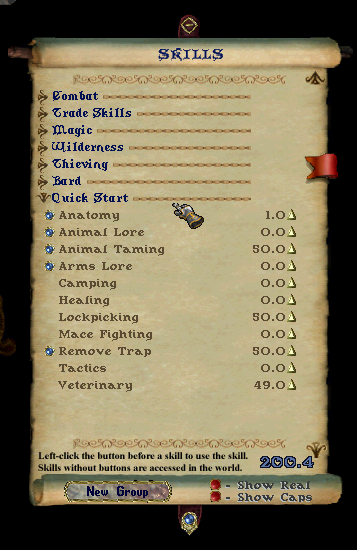 Hit up the newbie dungeon and train skills there to start, it's horrible gold ( other than the chests that we'll get to! ) but the skill gain is 10x the normal rate. 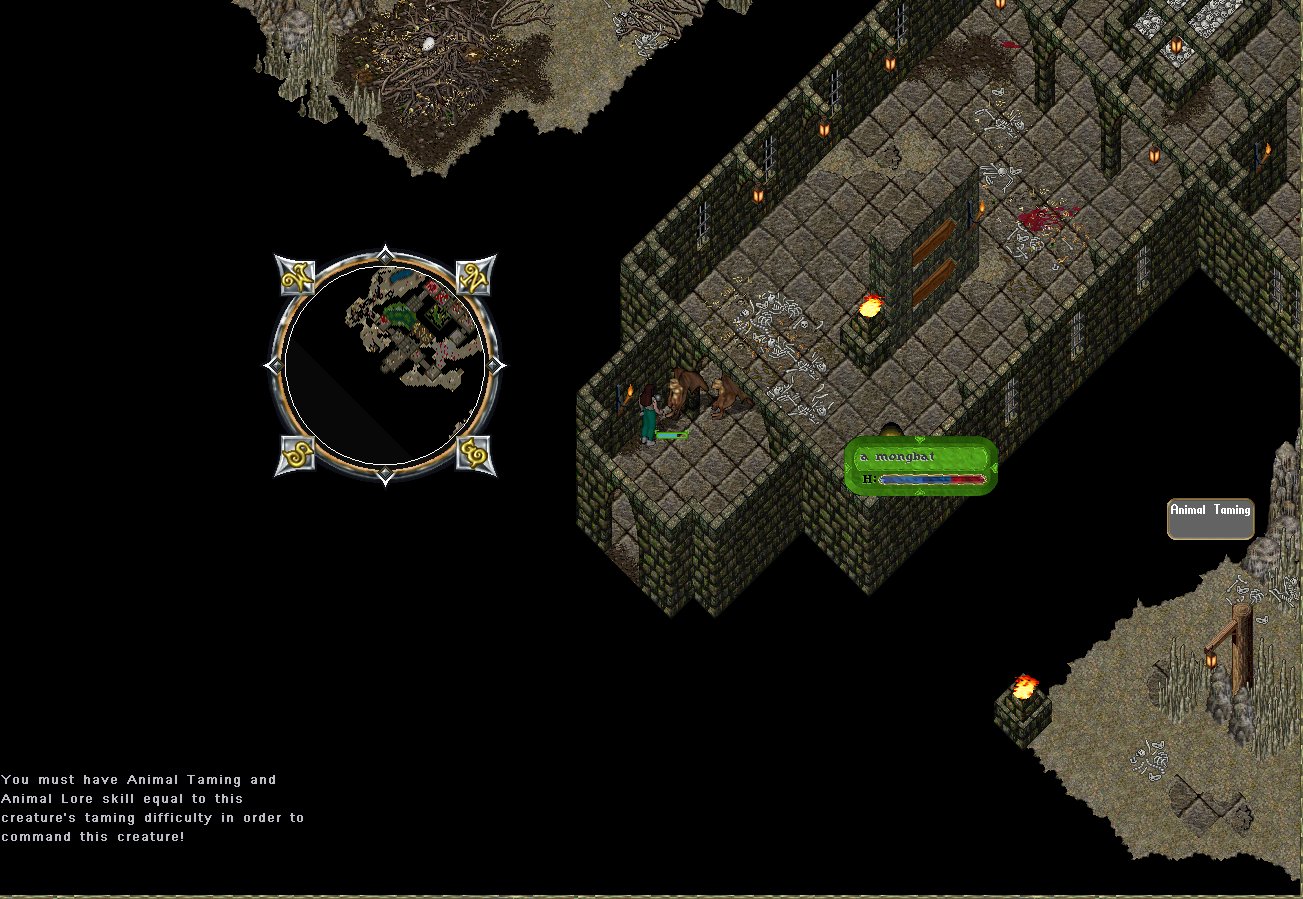 I tamed some mongbats to tank damage on my while I train my fighting skills, and macro animal lore. You can't control pets without sufficient animal lore, and also animal lore increases veterinary effectiveness. Once you can control these, you can tame better monsters like giant bats. If you want to get to 55 taming to tame familiars, which are awesome, then you should definitely train on these and the giant bats right next door. 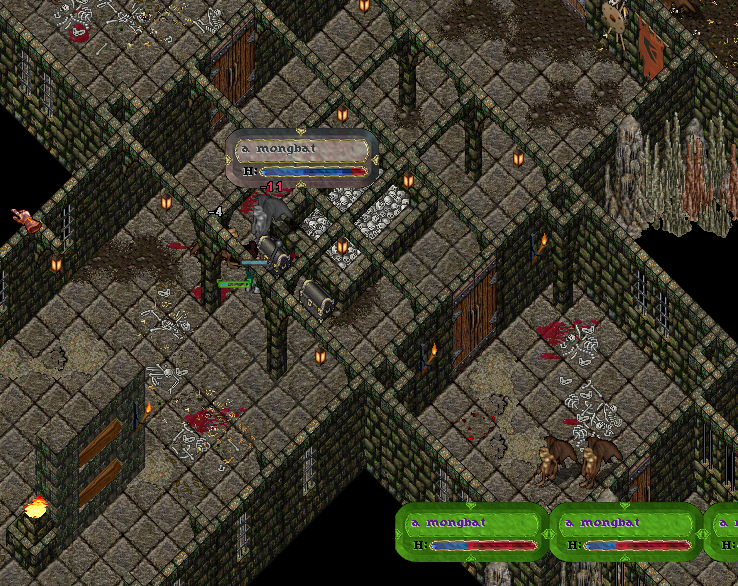 If you want to get gold right away, then start lockpicking! These chests contain ~50 gold each in the newbie dungeon, and there's a ton of them. Definitely a good way to get off to a good start with gold. 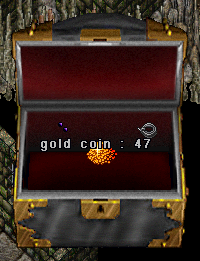 *Keep in mind, that you want to remove trap before lockpicking. Or else you die when a trap is set off. Also, in real dungeons, we will find out that some chests can still set off traps when removing them.* 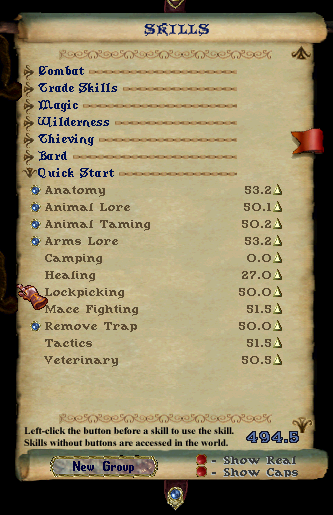 After about 10-15 minutes of gameplay and macroing while hitting mobs, these are my skills. I also have 244 gold.

If you choose to gather spells for your mage, then you can! 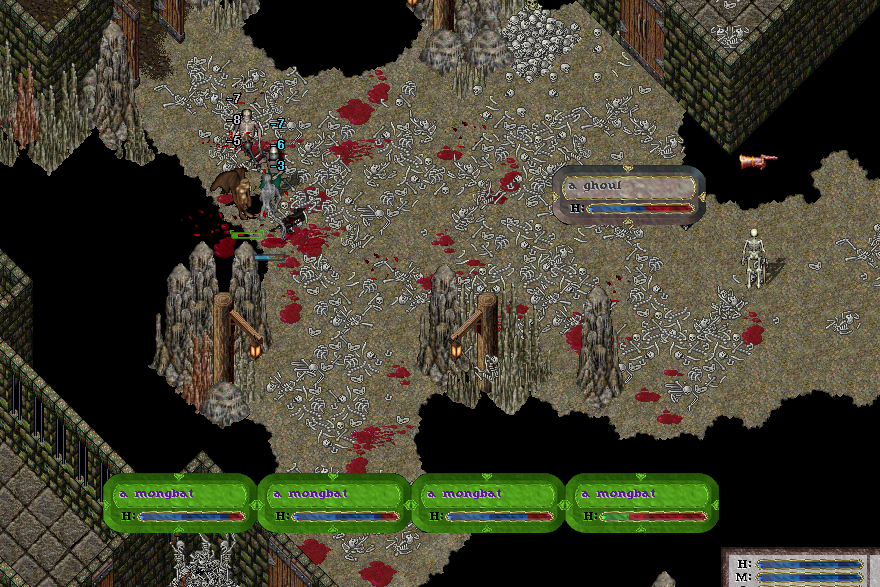 355 gold and gathering spells at this point, 20 minutes in 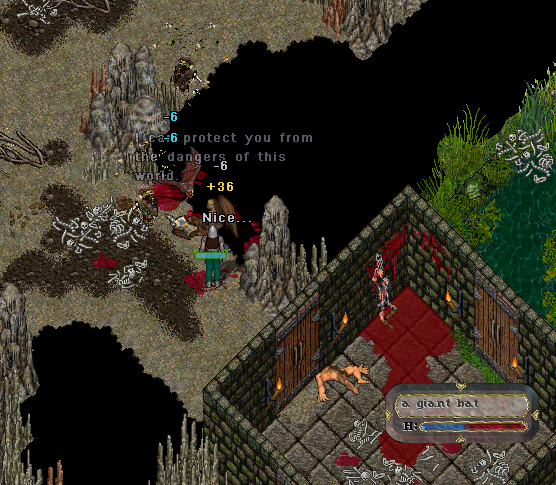 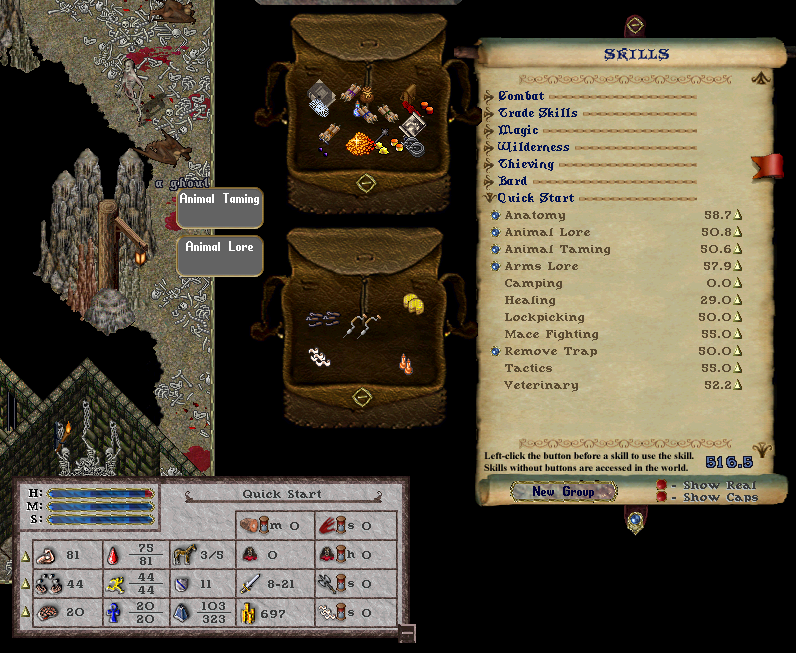 About 30 minutes in, casually playing and having a ton of fun! 167 bandages left and many different routes to take from here, with potential to kill more difficult monsters. At 55 taming, familiars are the best thing to tame, and make it possible to venture out into places like Aegis keep and kill mobs that drop over 100 gold. It all depends on what your intentions are at this point.

With 5 giant bats, you can kill liches while healing the pets. 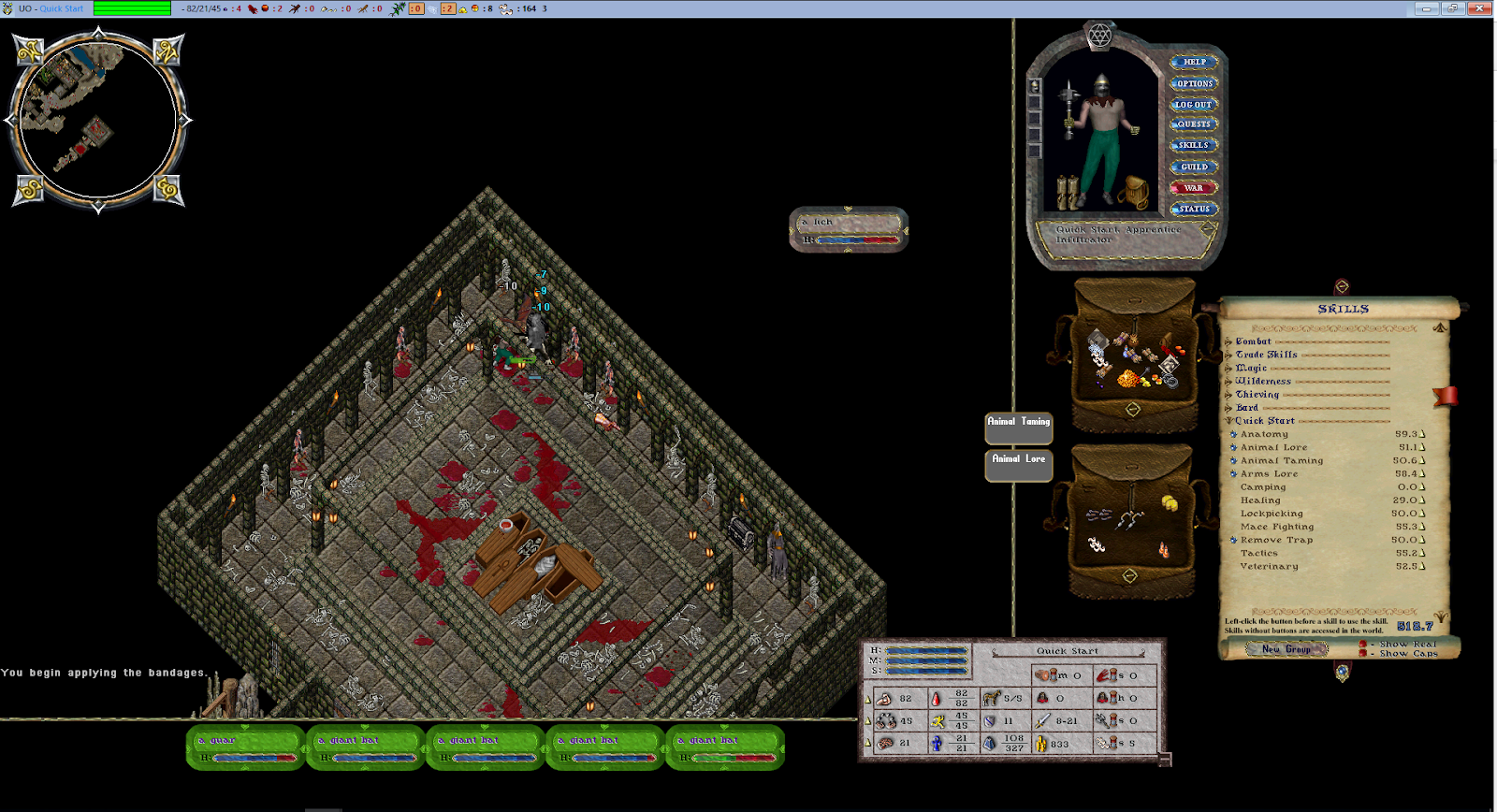 This way you can start working towards filling the 5th and 6th circle spells. If you’re lucky, you could get a blade spirit scroll from these. With 2 locked chests right there and the two liches spawning this is decent gold, but keep in mind this area will be highly contested at launch. It’s unlikely you’ll have it all to yourself.

At this point, you can take this character to Aegis keep and try your luck. The newbie dungeon has shit gold, but it’s good for training up skills. I’d say continue training there until you can at least tame familiars. But for this tutorial, my main goal is to show usability of this character for making money quickly at the start. So I’ll be heading to Aegis Keep with my 4 giant bats and a guar…

Aegis Keep is a nice dungeon because it’s relatively close to a town (Horseshoe Bay). Also, gold drops get decent as you go deeper. 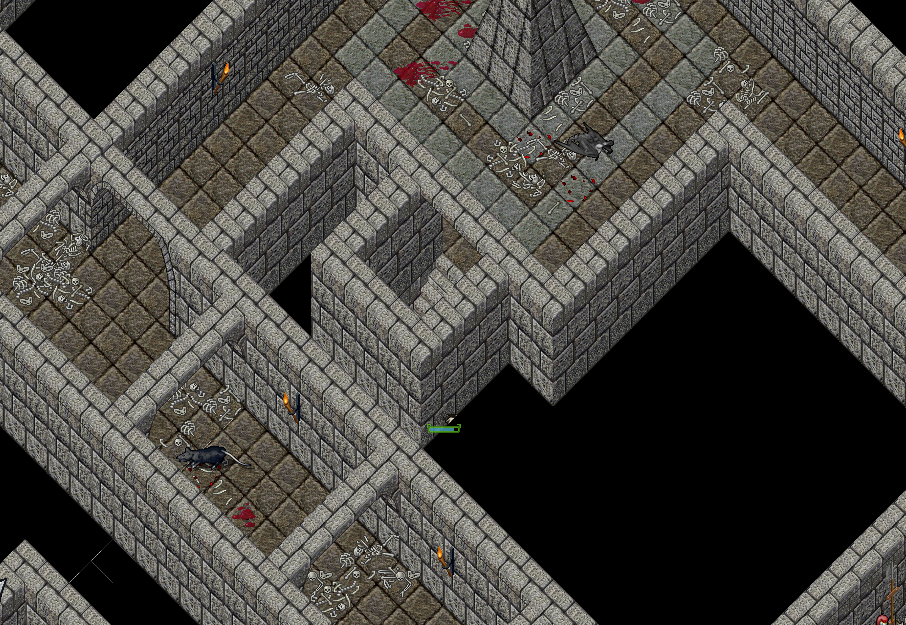 Here's a secret staircase in case you didn't know 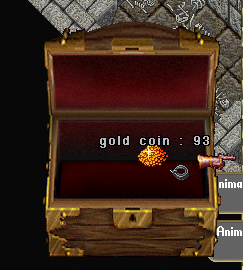 Not only is loot better, chests are better, and you can gain skill off of the level 1 ones. 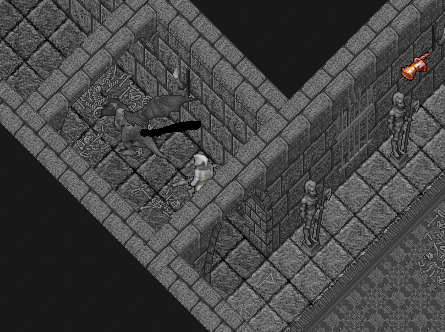 But seriously, make sure you remove trap before you lockpick! Also, some chests can be too hard, and will kill you when trying to remove trap… watch out for those.... The risk might not be worth taking if you’re going for gold. HOWEVER, if you’re going for skill gain, then these chests are the ones you want!! Go at them with no loot and gain that free skill!


Here’s loot from one that took a shitload of time and used up two of my tools. 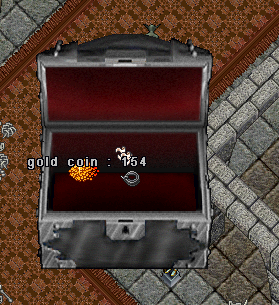 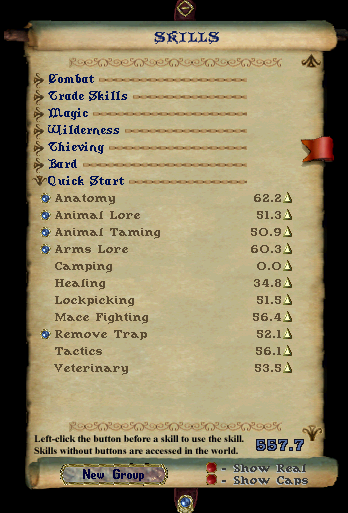 Here are my skills after roughly an hour of playing, gaining skill from macroing on pets or on chests in dungeons, and just running around having fun, the way the game should be played! 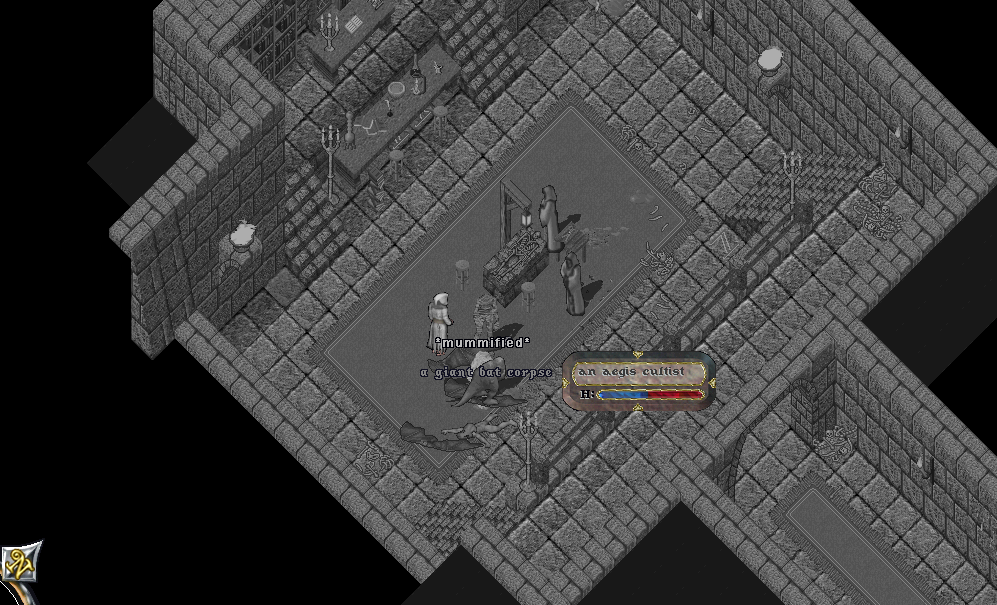 You definitely can’t do everything though. So keep that in mind!
Last edited by a moderator: May 30, 2018

Staff Member
Thank you for this excellent guide! Future new players thank you.