A tale of Hansel and Gretel in Maus

#1
Franz quickly popped his head out through the Mausoleum moongate. The animated monster freaks startled, seeing this bearded, jester hat adorned head hanging there, as it were, in mid-air - except that it wasn't in mid-air, but in mid-moongate.

"A-ha! The coast is clear", Franz thought, springing out of the moongate in a colorful euphoria, the comparison of which wouldn't be seen even during the love of youthful Spring! The animations were awestruck for a moment but then started screaming, alas, our hero was already passed them.

Following the delectable smell of newly baked cookies and foods, there was no question of which path to follow. Like the tale of Hansel and Gretel it was just to follow the crumbs! Reaching deeper into the dungeon, passing foul imps, a monstruous beetle that would always carry-on stopping intruders in his hallway, and a gang of weird squirters, Franz arrived at the famous place of 'Maus 3'. This spot of spots, the great gathering point of farmers and PKs, where apes are bathing, thunders roaring and fires burning: who is returning (alive that is)?

Sneaking past the entry halls and the moongate of Cowardice, Franz arrived at the horrific elder vampire hall. This place of uncountable tamer "all kill"-screams and PK gank squad runs; totally empty! "But I did smell newly baked cookies!", Franz reminded himself. He stealthily crossed the room, bumping into something hidden that he couldn't see. "That's weird", he thought. "And it's furry and smells of hound too! Oh well..." He circumvented the mysterious object, continued and came to the stairs on the east, towards the cells and the mini-boss.

"Hm... Now what?" Franz analyzed the surroundings. Suddenly! "Om nom nom!" "A-ha! Someone munching cookies down on the right!" Sneaking down the stairs, Franz took a turn and found himself in the presence of Pockets, an elite Maus farmer! Surrounded by tormented soul corpses, he was currently beating the crap out of an almost dead horse, who seemingly had merely lost it's way in the dark.

"Such cruelty!" Franz hissed. "Tis an abominable offence that cannot go unpunished!" Thus he stealthed up to Pockets, snatched his bow and stuck his tongue out. "Bh-what?!" Pockets exclaimed. "All kill!" Alas, Franz was already gone.

#2
Adding this from Discord: 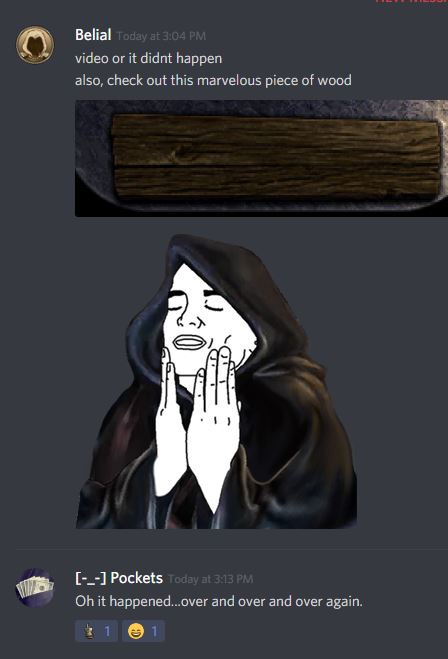