An Unusual Request from an Unusual Man

While taking a short hiatus from his research, Bob Van of Vance Demolition, emerged from his workshop after being cooped inside for some time. He begrudgingly walked to the tavern that was built next to his home in Haven thinking of all the ways that he could get back at D'Artagnon for ruining his once bastion of solitude and peace. The bay was so peaceful until the distils started working around the clock to feed and booze the patrons of their village, but that is another story. He took a seat at a table far from anyone else, and placed an unlit lamp on the table next to him to sit, relax, and listen.

It seemed like ages since he had heard another voice, but what was odd is that they were all chattering about dark skinned people that followed some kind of spider woman. Over time he learned of the poisons, and nefarious tactics that were used in combat as well as their ruthlessness. He unraveled a parchment from his backpack and began writing with gusto. A maniacal smile creeped upon his face until his pen stopped scratching the paper. He stood up and walked to the bartender to hang the parchment up on the bulletin board, and made his way quickly back to his workshop.

Looking down at the lantern,

"I need to prep the workshop Greenlee. I have a feeling this new research might be what we are looking for!"

The candle inside the lantern was only letting out a meager plume of smoke as he hurried to the workshop, but never quite went out.

Back in the Tavern, the bartender read the request, shuttered a bit, and them posted it up:

"To all Pathfinders and Allies. Due to the recent influx of spider people, I will need samples to help us combat them. Please help fill the list below:

1. 2 to 3 spider people cadavers. No more than 24 hours old otherwise the rigor mortis will affect the muscle structure
2. Spider people may carry poisons on them, I require samples to compare against our stocks. At least 20 of their poisons should be enough
3. Spiders. They seem to like them, so kill them and bring me their husks, and venom sacks
4. Bring at least 4 or 5 of their weapons to me for composition analysis
5. If there are explosion potions. Please bring any and all to me for Alchemical analysis.

Two chests that were leaking crimson blood from the bottom were dropped of in Bob Vance's workshop. He had tables prepped for the anticipated autopsies in advanced, so the rangers were able to place the corpse pieces on the table.

"Did you have to mutilate the subjects before bringing them here?"

A smirking ranger replied to Bob's disdain about the delivered corpses.

"They're easier ta carry this way M'lord! If'n ya don't like how they are delivered, ye can always git them yerself!"

Seeing no need to reply to the simpleton, he nodded for them to continue unloading the corpses on their respective table. Once the task was completed, Bob had made a threat to the ranger about cleaning the bloody mess they trailed in. If it wasn't cleaned by the day's end, D'Artagnon would hear of it, and he was no where near as hand off with the Rangers as Bob.

With the Rangers gone, he was free to begin. Sadly he placed Greenlee off to the side while he began his work. He decided to work on the male corpse first as it looked like it had seen better days, and was decomposing quickly.

Using tong and rebar poles, he adjusted the torso for further examination:

After jotting down his notes, he moved on to his first test, Fire:

The candle is held under one of the separated arms, then leg, torso, then head. His puts the results in his journal: 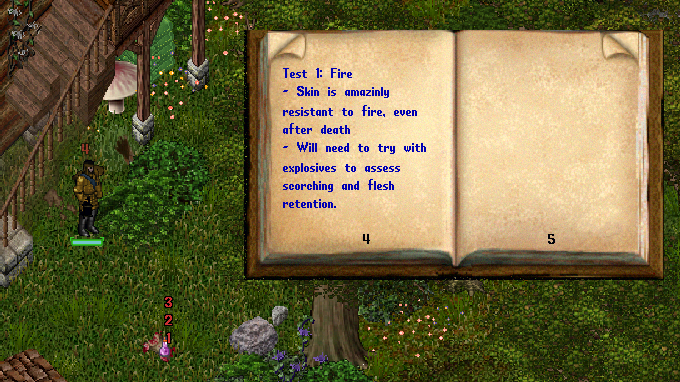 The lack of reaction piques Bobs curiosity, and he opens the mouth of the male Drow to look inside:

Bob then grabs a spoon from his tea cup, and proceeds to dig an eye out of the male head. Once it was removed, he used a skinning knife nearby to sever the nerve endings holding it attached.

Satisfied with his examination of subject 1, he moves on the subject 2 to repeat the testing.

"Seems the female might be stronger than the male Drow. See Greenlee, no scar tissue from poison ingestion."

Places both heads next to each other, and goes into great depth as to the possible reasoning. Ultimately he ends off with he will need a live subject to learn more, but he went on to complete the final test with removing an eye and testing it in the sunlight.

"I need to enhance the explosion potion Greenlee. I may be able to add nails to the outside of the bottle with spidersilk adhesive."

Looks at Greenlee for a response, but silence

"That's the plan then. Our soldier wear metal armor, and not leather like these Drow anyways. Time to bring the report to the Guild House." 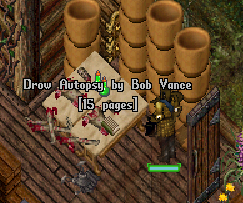