What is town warfare day? Every Wednesday, at 21.45 GMT (16.45 EST) Anarchy Euro Team aka Anarchy F team will be in a town, in a group of no more than 6 people, looking for WAR. This server is lacking in organic PvP options - let's make our own. YES I'M AWARE THIS TIME IS NOT CONVENIENT FOR EVERYONE, but perhaps the 40 people who engage in town struggles at around this time may be interested in participating? You're PvPers, right?

How you can get involved:

Why you should get involved:

We'll rotate the town every week - I'll message in #pvp when we're in position. Bring as many people as you want, but if you regularly bring more than 6, you know what will happen - it'll devolve into more rail wars, so try to leave it out. If we have more than 6 online, we'll split into two teams, in two different towns.

If you want to arrange even numbers or special rules, msg me in discord beforehand. If you just turn up, expect WAR. Reskill, dry-loot, corpse molestation.

For info, here's a list of the current guilds with ballz on Outlands: 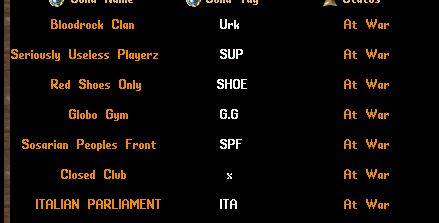