Blood in the Water

#1
Cannons roared, drowning out the shouts and orders of the crew of The Lusty Wench. Thankfully the enemy barrage mostly missed, passing just over their heads. A stray shot battered across the quarterdeck and took the took the leg of crewmate @Macshin clean off below the knee. He fell to the deck in shock, grabbing his now severed appendage and trying to put it back in place.

They had been harassing trade ships bound for New Trinsic (Cambria) for weeks. Striking swiftly from their outpost base on Scallywag Island, east of the city. Those they had captured were put to the sword if injured or kept to be sold to the slavers operating out of Horseshoe bay. Jack’s plans were meticulously thought out. Cut off trade to treacherous King Arshiya’s force’s in Cambria. Create economic unrest in the City. Then spark rebellion. Once Arshiya’s head was mounted on a spike above the city gates, along with his whore wife Lady Kiriana, his crew would take their rightful place as leaders of the Free City of New Trinsic.

Outnumbered, the Crew of the Lusty Wench sinks two ships with ease 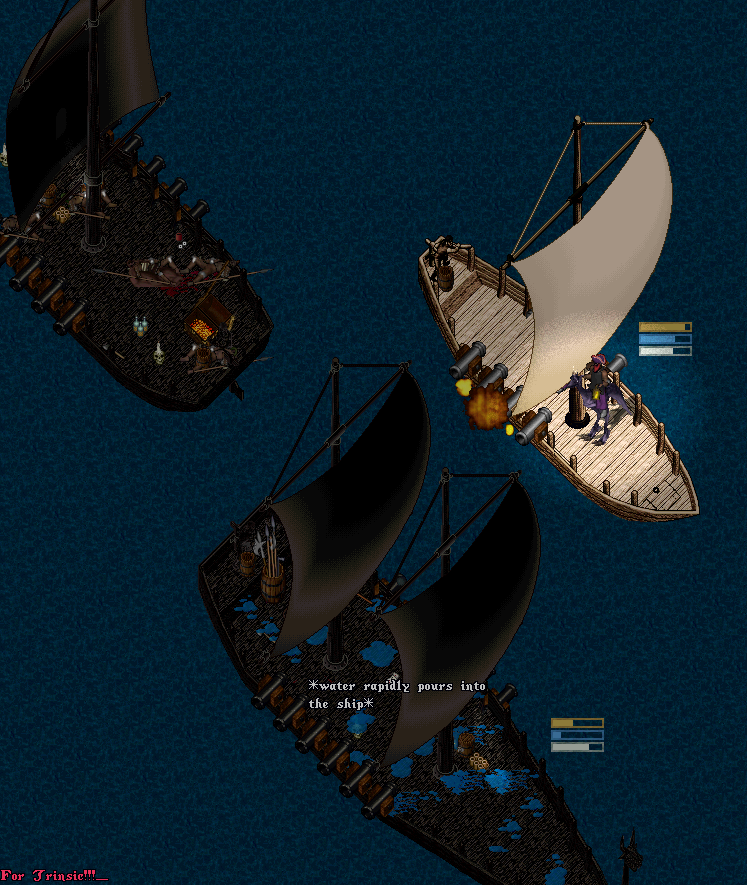 ​
This day had started like many others, a merchant Galleon was spotted just north of New Trinsic Harbor. The Lusty Wench and her crew closed quickly, bloodlust in their eyes, ready to take the easy prize. But just as they came into firing range, cannons appeared from hidden gunwales and began to fire. “It’s a trap!!” yelled crewmate Ackbar.

They came abreast of the Galleons stern and let loose a devastating barrage. A short time later they were aboard the enemy ship, cutting down the remaining defenders and rounding up those that would fetch a descent price in the slave markets of Horseshoe Bay.


Outmaneuvered, King Arshiya's Merchant Galleon boarded and her crew put to the sword

“Aye a good prize.. how many casualties on our end?” Jack asked

“A half dozen or so. Macshin is pretty busted up but we’ll fit him with a peg leg and he’ll be back to fighting shape soon.” Sly answered.

“That bastard Arshiya will no doubt have more traps waiting for us as we close in on him. We’re going to need more crew if we’re going to take the city.” Jack mused.

“Aye, I’ll see to it the word is spread throughout the taverns and whorehouses. What about the remaining crew of this vessel?” Sly said pointing to the disarmed crew of the merchant Galleon.

“Too loyal to Arshiya to be trusted. Cut their throats and let’s make ready to sail.” Jack said, casually. Sly moved to carry out the grim task.

Jack knew they’d need more fighting men to depose the false King, and once that was done, to secure New Trinsic. The drums of war were already sounding in the north. Prevalia, Orcs, Vikings.. any one of them might march south on New Trinsic. He wouldn’t wait around for that day. Better to take the fight straight to them, but first Arshiya... Head. Spike. Wall.


A message pinned at every tavern and whorehouse in Outland 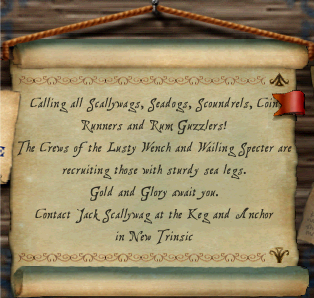 #3
Did Ackbar survive the fight?

#4
Jack smiled as he peered through the spyglass. The signal flags we’re raised on the scout ship The Salty Wench, which could mean only one thing… unsuspecting prey were on the horizon.

“Unfurl the main sail, tack hard to port. Full speed ahead men, hold nothing back!” Jack commanded. He nodded then to @Angalor who sat perched on the crows nest of The Lusty Wench. The deckhand raised the black flag to signal to the other vessels in the Trinsican Fleet. Shortly thereafter The Bloody Bucket and The Noxious Tide, captained by legendary seadogs @MacShin and @Amplify mirrored the Trinsic flagships movements.

It was a maneuver well practiced by the fleet and meant certain demise for their hapless prey.

Jack jumped atop the gunwale, sword raised high and bellowed, “Take what you can, and give nothing back!!”

The crew cheered and shouted in response, “For Trinsic!!”. The anticipation of blood, booty and battle boiling over into a fevered pitch as they readied for glorious combat.

The Trinsic Fleet readies for Battle

Third Eye gets a cannon barrage straight up the brown eye

Captain Jewel surrounded by the fleet, even the NPCs pitch in to bring down this seadog

The Sunken City is no place for amateurs

A note pinned in every brothel, tavern and dock in Outlands

#6
Good stuff, enjoyed your podcast interview. See you on the waters soon

#7
The men lay scattered around the makeshift bar at Hideout Island. Most were passed out drunk, the rest noisily groping lusty bar wenches.
Jack poured another glass of Cambrian red wine, a rare vintage lifted from the holds of a merchant vessel and sighed deeply.

They'd seized dozens of merchant and trade ships in the past months. All in an effort to weaken and overthrow the corrupt Cambrian government and restore New Trinsic to it's former glory. But the men had gotten fat and lazy with all the recent victories, losing sight of the ultimate prize.

No longer... Jack thought. Cambrian supply lines must severed, their fleet weakened and the walls broken. It was time to press the attack... It was time for all out War.

The astonishingly wealthy @Sonny Solvej caught in Trinsic Waters. The pumpkin ship ransomed back for one million doubloons!

In order to starve Cambria prior to the seige, fishing vessel are seized and ransomed.

A massive battle takes place at the Spirituality Shrine

Cambria will fall, and New Trinsic will rise. Event TBA.

I'm new to the high seas and Captain of the legally acquired ship Mercury's Negligence. My mate and I are wondering how much protection runs for a small ship?

#9
What do u get for killing npc boats?

"Hard to Port! Ready... Fire!!" The entire deck of the Lusty Wench swayed as her cannons boomed in deadly unison. The sea-monster bellowed a blood curdling howl as it's tentacles flailed. One swept just over the quarterdeck nearly taking off Jack's head.


Insatiable Maw and Ocean's Fury cut down by the Trinsic Fleet

Enemy poacher caught and boarded off the coast of Cambria

LOD ship having a bad day.

Trinsic Fleet gathers in the largest sea operation in the history of UOO.