​
Hail travelers and stalwart adventurers! Here you will find a most casual guide to the dungeon known as Nusero, as compiled by myself. I shall reveal to you the creatures within as witnessed by my own eyes, and some known to me only by tale. There are treasures to be found within the caverns of this antediluvian dungeon, but you will also find great dangers lurking deep beneath the earth. Read on, and steel yourself if you are entertaining the notion to visit this den of fire-breathing beasts! 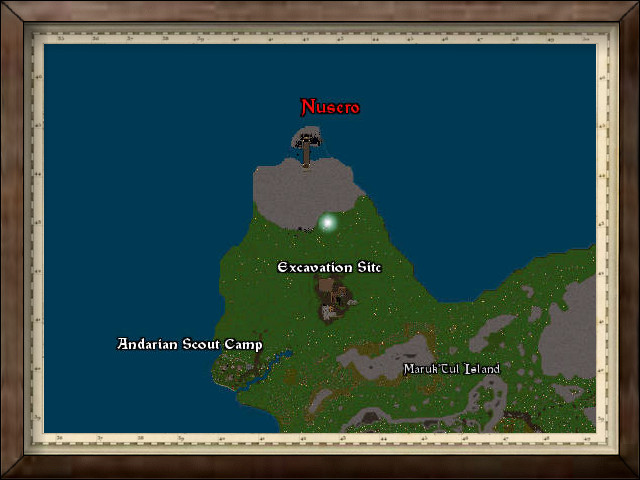 You will find the dungeon of Nusero located on the aptly-named Nusero Island. You will need to travel by boat or through magical means to find your way here. On the most northern-side of the island, you must pass through a cavern and cross a bridge to locate the entrance.

Interestingly enough, it would appear that this dungeon might have been discovered perhaps by mistake. If it were not for the work of intrepid miners and explorers clearing out the northern mountain of its precious ore and stone, perhaps the entrance to this cursed hole would still be sealed. But, alas, what's done is done and this vile place now lies exposed for any adventurer, green or harty. 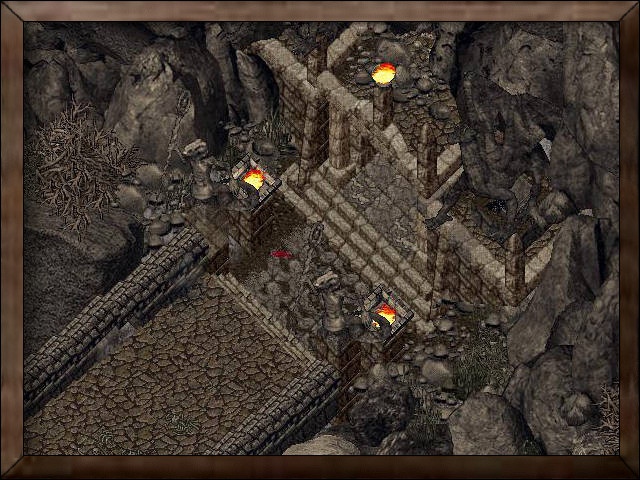 (The Artist's depiction of the Nusero entrance) 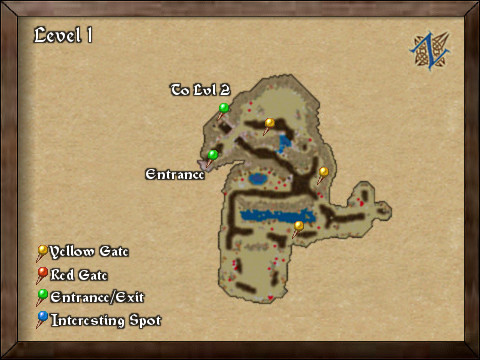 (The Artist's crudely-drawn map of level 1)


The top-most cavern of Nusero is not terribly dangerous to the prepared explorer. There are multiple yellow moongates speckled throughout this top floor which allow for quick and easy egress. The denizens if his upper floor do not pose a great threat unless they are somehow grouped together. This part of Nusero is relatively cool in comparison to the lower levels, and you will find pools of water abound, which sustains the local fauna.

The cavern descending down to level 2 of Nusero is deceptively close to the main entrance, however it is not so straightforward to get to. You must navigate around to the east first and pick up a path that runs beneath a roof of stalactites. You can find some lesser members of the Stonescale Tribe in the eastern-most section of this level, with Monitors and Primordials lurking throughout the remainder of the area.

Below are the creatures you can expect to find here on level 1: 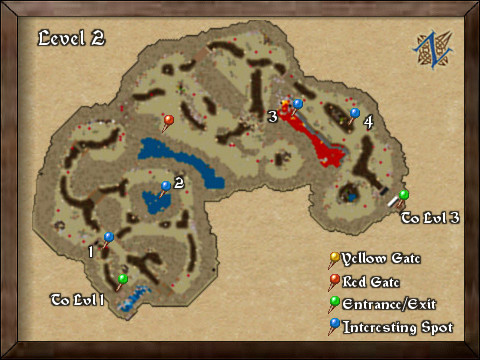 (The Artist's crudely-drawn map of level 2)


As you descend into level 2 through a narrow corridor, you will likely note that the ambient heat begins to rise. The water in these areas is warm enough to bathe comfortably in, though it is not recommended - if the bones and skeletons at the bottoms of the pools are any indication! See Blue Pin 2 on the map for such an example: 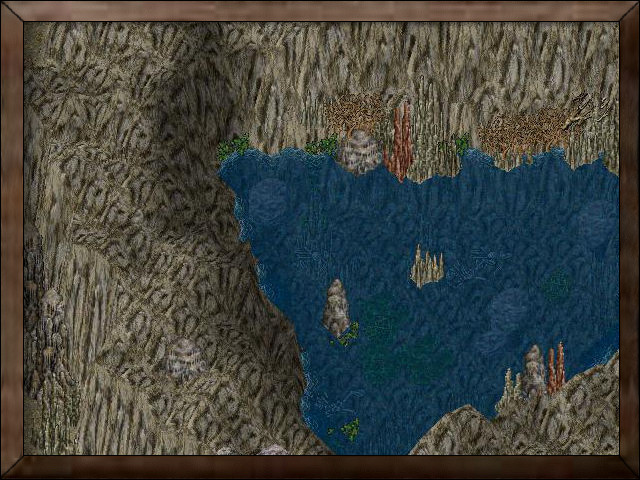 
Closeby to the entrance is an interesting area, noted by Blue Pin 1 on the map: 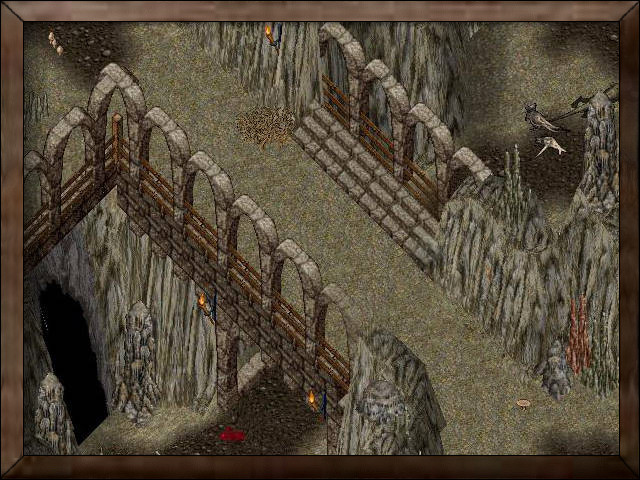 
The crevice depicted here near the overhead bridge leads to a rare Komodo den. These large lizards are vicious, but not overly troublesome to the prepared adventurer. But, be wary! There are Chameleons nearby which are very difficult to espy and will gladly ambush the unsuspecting.

As you make your way through the winding tunnels of level 2, you will notice that there are no yellow moongates here. Instead, you will discover a red moongate, which will allow for you an easy egress should you need it. You will not be able to mark or recall near these red gates as you could near the yellow ones above!

You will also notice that the creatures that you encounter are stronger than the previous level. Bring cure potions and bandages to deal with the dangerous venom from the asps and adders that have made level 2 their home. The upper hierarchy of the Stonescale Tribe can also be found here, divided into Warrior and Shaman castes. But, they are not the most dangerous things looming in the dark tunnels of this level. As you advance further and further, and the hot air grows thicker, you will discover dragons and their nests. 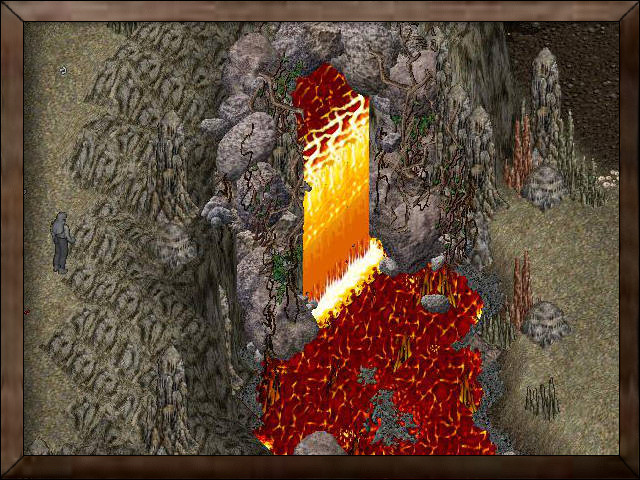 (Lava bubbling up from the levels below, Blue Pin 3 on the map) 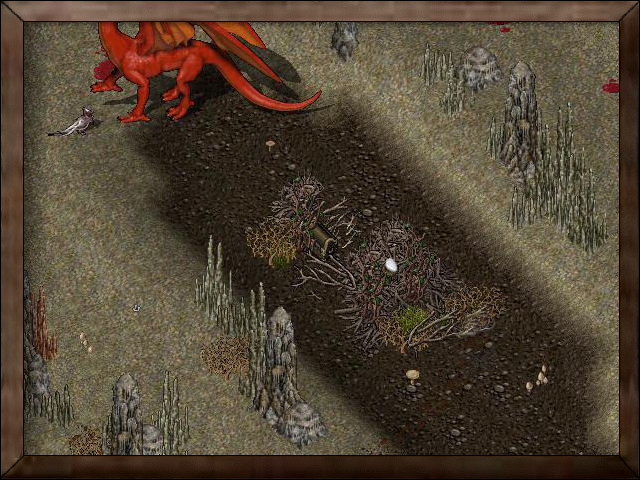 
Below are the creatures you can expect to find here on level 2: 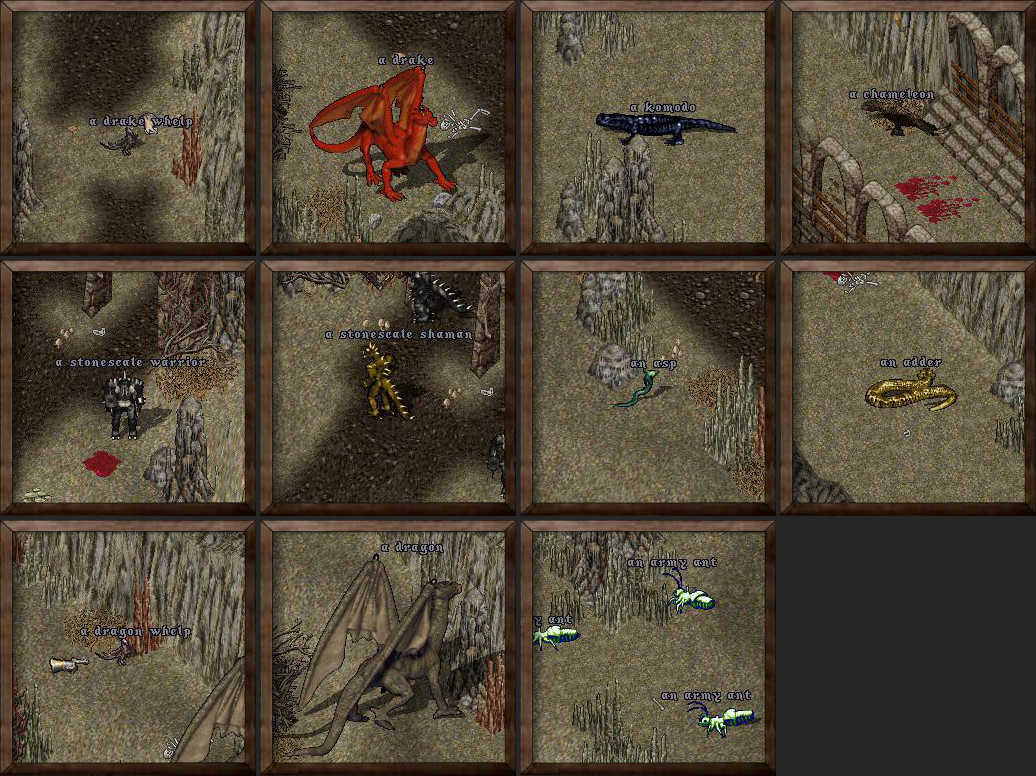 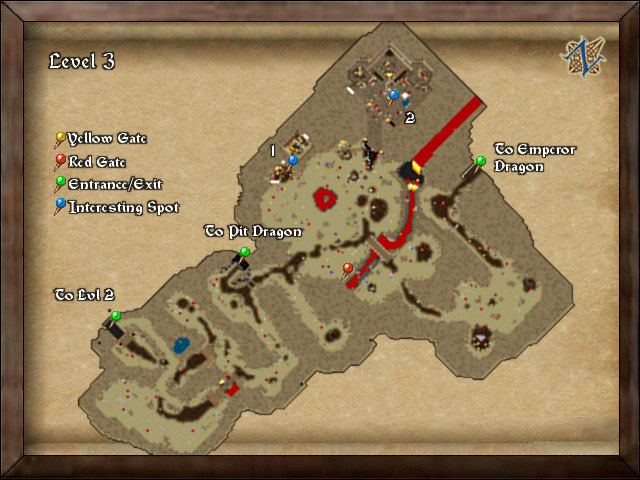 (The Artist's crudely-drawn map of level 3)


The third level of Nusero is also the largest, but fairly linear to navigate. What struck me immediately upon entering level 3 was the presence of Ophidians. These are native denizens to a place known to me as the Lost Lands in Britannia, but my knowledge of Avadon's history leads me to believe that no such place currently exists within this particular shard of the Gem of Immortality... Though I suspect they might have travelled here through the same method that a certain Papuan citizen I have met did. Whatever the case may be, these Ophidians have been here for a very long time, as evidenced by their statues at the front entrance!

Also not too distant from the entrance back up to level 2 are wyverns, a strange-looking and finned form of drake or dragon, and as you rend your way through the level 3 tunnels, you will discover more varieties and breeds of drakes and dragons of all sorts of colors and abilities.

To my surprise, I did find an encampment of sorts fairly deep within this furnace of a cavern: 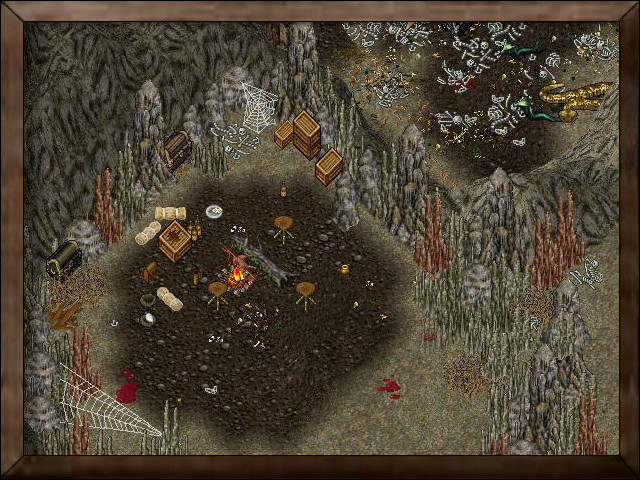 
Who dwelled here, I am not certain, but they could not have travelled far for their fire was still burning. The evidentiary litter, ale bottles, and camping equipment lead me to believe that someone has staked out here for a period of time, for reasons unknown to me. It might be prudent to be careful when approaching this area, for it is not known if the owner of this camp is a friend or foe to common adventurers.

Should you follow the westernmost cave wall northward, you will discover a most peculiar mystery: 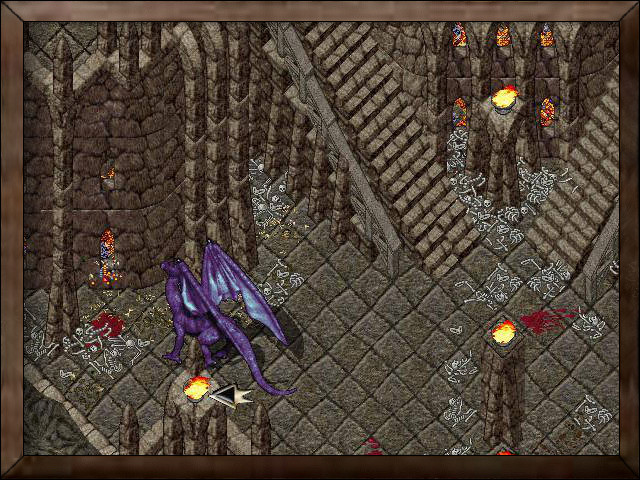 (Stone structure inhabited by Eldritch Dragons and Drakes, Blue Pin 2 on the map)


Standing in contrast to the nature-made caverns and tunnels of everything previous is a large man-made structure, crafted with a fine eye for architectural detail and stability. The human bones and remains that litter the ground appear to be quite old. It is not entirely certain who made this place, the best theory is that this was constructed by members of the Knight's Guild some 600 years past, due to a mishap with a black moongate when they attempted to come to Avadon initially. The architecture and structure, as old as it is, is nearly identical to the more modern structures created by this group of Knights. Further evidence exists a short ways south of the main entrance to Nusero as well in the form of an ancient statue being unearthed presently by the Knights.

There is a great deal of treasure inside this stone structure. I dared not try to take any as these Eldritch dragons have made numerous nests all along the parapets and their eyes seemed mighty keen on detecting any would-be thieves. Where this treasure came from, I could not guess - perhaps it was the accumulated wealth of the Knights, or perhaps it is just what the dragons have managed to scrounge together over a very long time. The only thing I know for sure is that no amount of treasure is worth your life!

Below are the creatures you can expect to find here on level 3: 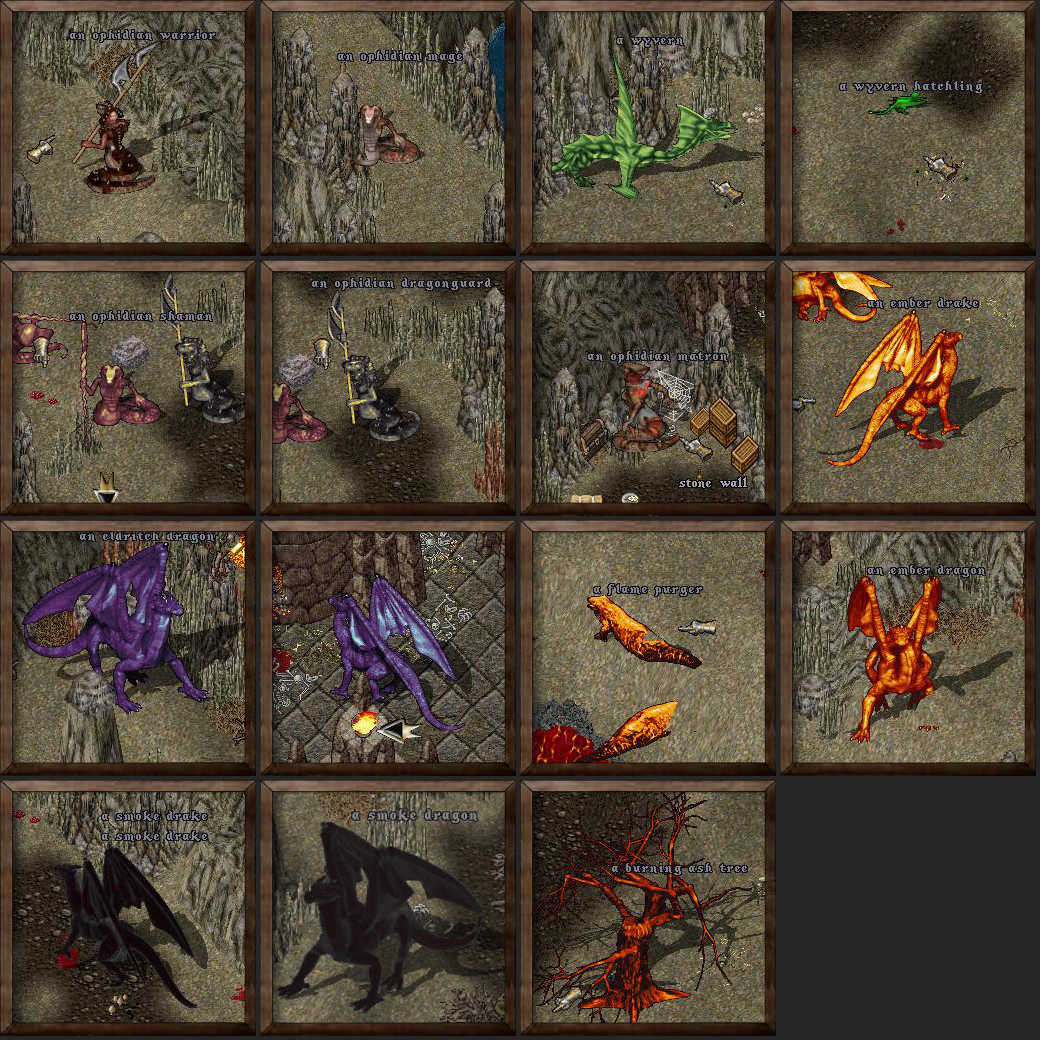 (The Artist's crudely-drawn maps of the dragon lairs)


There are two unique and rather imposing levels off of level 3. The first one that you come to is known as the Pit Dragon's Lair. 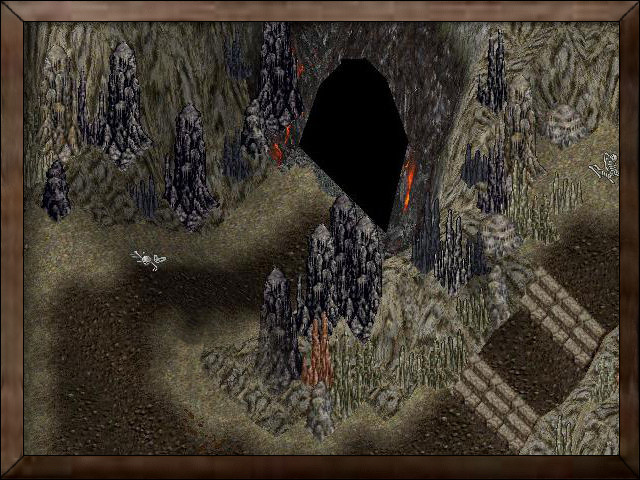 (Entrance to the Pit Dragon's Lair)


There is not much I can tell you about the Pit Dragon itself. I have not encountered it myself, but have heard of it as an incredibly dangerous beast! It is most prudent to stay away from this creature if you can. If you are stubborn and foolhardy, it would is best to bring strong companions to have your back!

At the northern-most point of level 3, after climbing atop some winding cliff-sides, you will find your way to the Emperor Dragon's Lair: 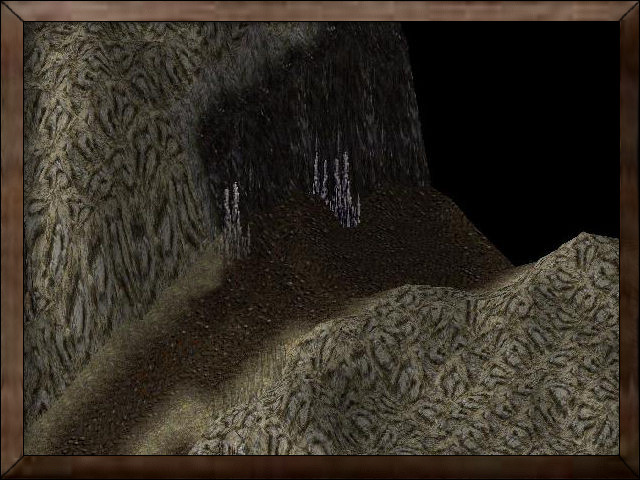 (Entrance to the Emperor Dragon's Lair)


If the Pit Dragon was to be avoided, the Emperor Dragon should be completely forgotten! Only the mightiest and strongest should ever dare approach the lair of this monstrous foe!

(The Artist's depictions of the Pit Dragon and Emperor Dragon)

The story of Nusero at present remains largely unknown. Much of the dungeon was made naturally and over time, the flow of water on the upper floors and the heat and molten effect of the lava on the lower all helped shape the twisting tunnels and offshoot branches of caverns. But there, at the bottom, lies something indisputably man-made. I will endeavor to learn more of this place and illuminate the mysteries contained within.

I will put forth a theory of mine, though give it little weight as it is largely speculative.

It's generally believed that this world of Avadon is largely different than the many forms of Britannia that inhabit numerous other pieces of the Gem of Immortality. Although parts of Britannian geography can be recognized in Avadon, much of the greater world does not resemble Britannia. This difference is theoretically attributed to the approximate distance this shard was from Mondain's body upon his death. In most forms of Britannian history, after the death of Mondain, a civilization formed amidst the ruins of the realm once known as the "Lands of Danger and Despair" (thereafter known as the Serpent Isle), called the Ophidians. Take note, these Ophidians were not the same as the Ophidians I have come to known from the "Lost Lands" of Britannia! However, these Ophidians did have a strong affinity for serpents all the same and worshipped the Great Hierophant, a powerful serpent deity. But, more to the point, they created three underground cities: Skullcrusher, Spinebreaker, and Furnace.

*Nusero Island itself could be Avadon's version of the Serpent Isle.
*Much of the bestiary of Nusero is comprised of serpents and lizards.
*There are crafted statues of Lizardmen, Ophidians, and Dragons present, thus indicating some form of higher-thinking.

It is far from conclusive evidence, and I suspect a great deal of the actual evidence that could point scholars such as myself in the proper direction have not yet been discovered, or perhaps are lost to time.

I will endeavor to learn more about this place and will update my casual guide with information as I learn it.
Last edited: Feb 28, 2019

Staff Member
This is fantastic! Amazing work and I truly enjoyed reading your take on it.