​
Oh Traveler, do head these words that follow! I fear a most insidious danger may lay deep beneath the forsaken Dam that is the Dungeon known as Pulma. Although the creatures that dwell within the easily-accessed halls, tunnels, and aquifers are more than danger enough to even hardened adventurers, I do not speak of these. No, in my studies and examinations of this grand structure, I might have discovered the very influence of the terrible machination born of Mondain’s and Minax’s twisted union, Exodus! 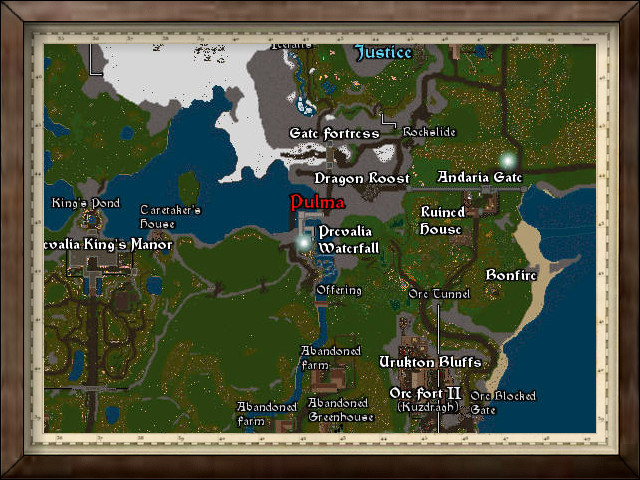 Before detailing why this most unholy of daemonic machines may lurk far below the depths of these waters, I will first start by sharing some of the known history of Pulma.

Due to the location of the Dam, it is not entirely clear whether it falls under the jurisdiction of Prevalia or Andaria (being located betwixt the two nations), and I suspect it is a bit of a point of contention.

Although there are no easy-to-find records, I believe this structure was built after the unification of Upper and Lower Prevalia, when the Prevalian Emperor was keen on expanding influence and land-ownership (perhaps somewhere between 250 AC and 270 AC). The great Dam of Pulma was initially created by Prevalian craftsmen with the intention of preventing the flooding of the northern Prevalian lands. It was intimated that the Andarians were not particularly pleased with this, as it removed a natural barrier between Prevalia and themselves. In the wake of Pulma’s construction, Andaria created the Andarian Gate that separates the two lands. 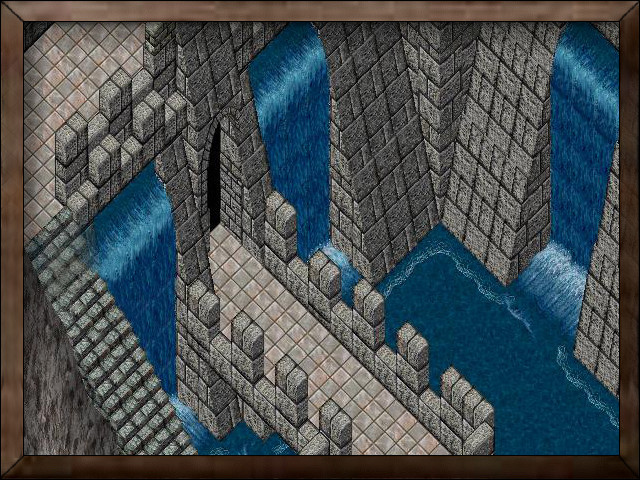 (The Artist's depiction of the entrance to Pulma)


As such, the Dungeon of Pulma is not terribly old, at least not in comparison to areas such as Mount Petram and the Ossuary, which are quite ancient. It begs the question, then, as to what exactly happened between the time it was constructed and now? Why is this place full of creatures and mechanical servants? 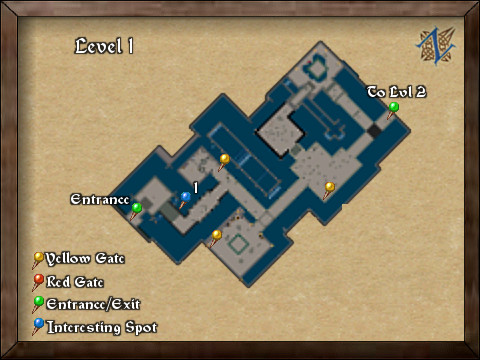 
When you take your first steps into the great Dam, you will notice that the interior construction of the structure remains largely intact. There is not much damage or wear, for the structure is not terribly old. The channels and aqueducts, however, show ample evidence of human remains, discarded or abandoned furnishings, and other such objects. 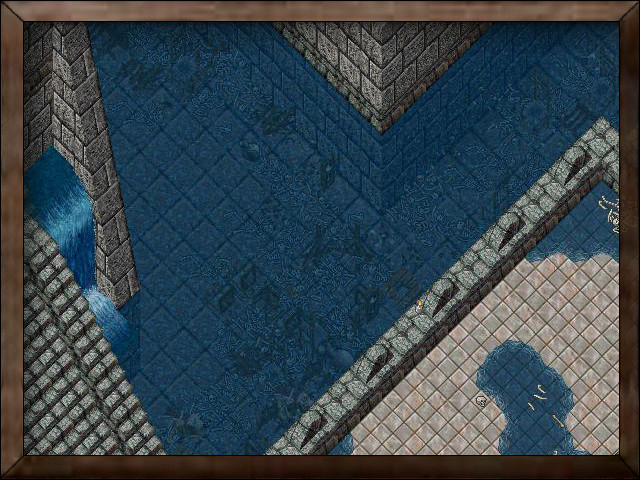 
Here, even on Level 1, you will catch your first glimpses of the “Precursors”. These “people” are unlike any other that I have born witness to. A fusion of strange technology and flesh, their primary purpose seems to be the creation and maintenance of mechanical guardian constructs. What they are guarding won’t be discovered unless you travel further down into the depths of Pulma.

As a word of caution, if you are attempting to slink in the shadows through this place, be extra watchful of the Precursor Sentries, who are able to reveal such deceptions with ease!

Below are the creatures you can expect to find on Level 1: 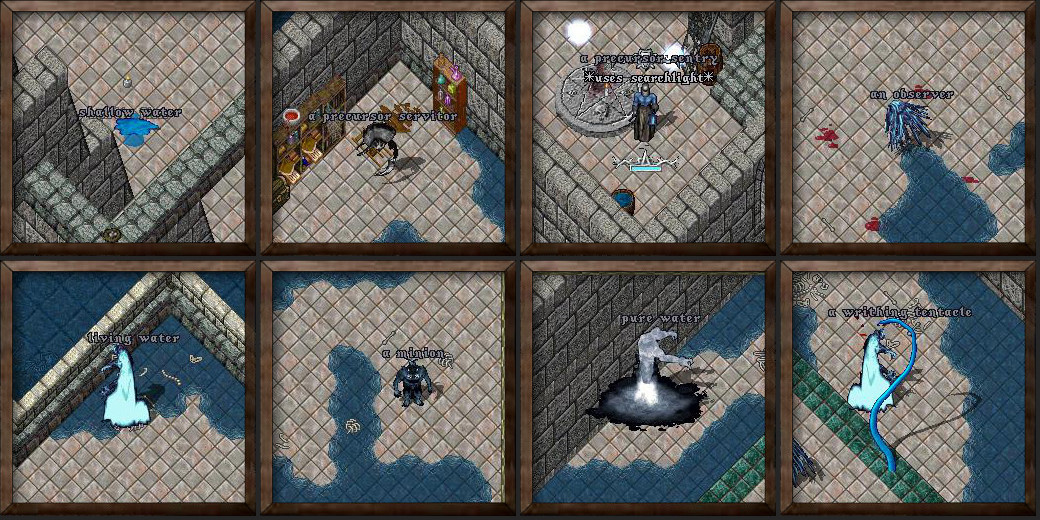 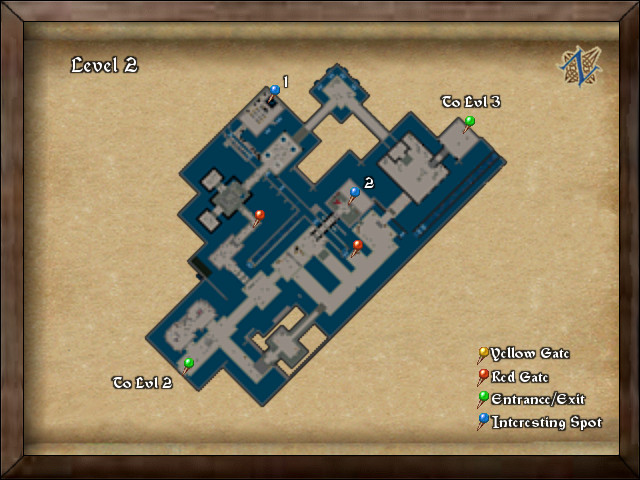 (The Artist's crudely-drawn map of Level 2)


Although expansive, Level 2 is structurally similar to Level 1. The stone brick walls remain in good repair, the aqueducts flow mostly freely in spite of the debris in some of them. However, down here you will begin to notice certain key aspects to understanding the nature of the Precursors who dwell within.

I’ve managed to sneak in unnoticed and saw two Precursor Sorcerers at a makeshift altar. The presence of blood around a spiked pit leads me to believe that certain sacrifices take place here, or perhaps offerings. To whom will be discussed further below. 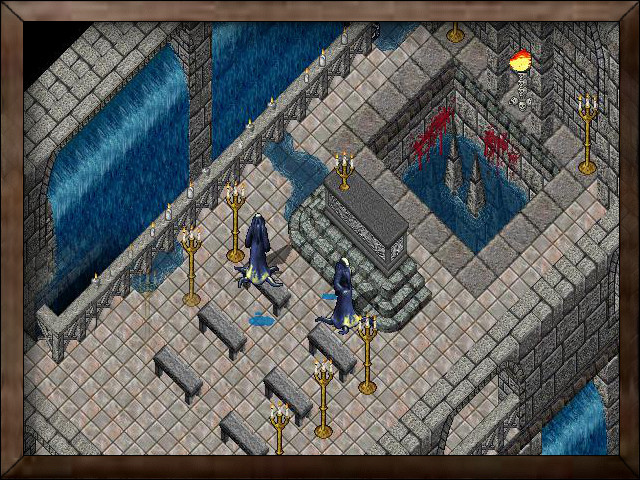 
There is also evidence of captivity. These makeshift dungeon cells and execution chamber suggest that prisoners are kept here by the Precursors for a period of time. They are perhaps kept here until the Precursor Sorcerers (or perhaps the Overseers?) require them to be sacrificed or perhaps they are added to the ranks of the Precursors through a strange form of magic or alchemy or other method which we know little to nothing about. Though I feel it is more likely that prisoners are kept here to be studied for reasons discussed below. 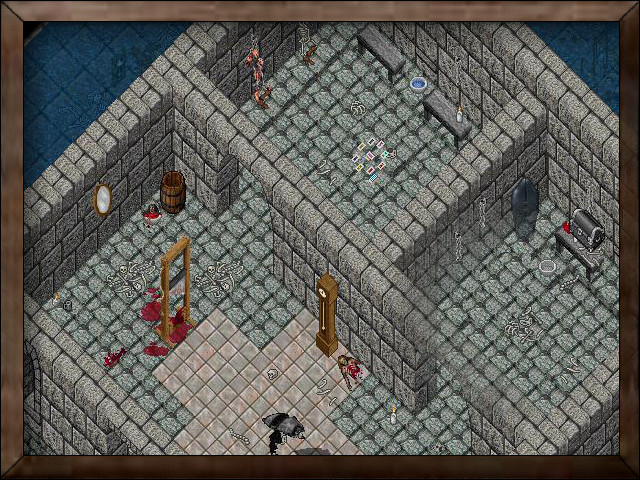 (Blue Pin 2 on the map, a Precursor Servitor guards the dungeon within the dungeon)


The Precursors are not the only entities you will notice throughout Pulma. There are plenty of naturally-occurring fiends that dwell within and have made the channels their home. They seem to live in some sort of symbiotic harmony with the Precursors. I suspect that once the Precursors are finished with the body of an offering, that body is given to the local creatures to feast upon. With one feeding the other, the two live side by side.

Below are the creatures you can expect to find on Level 2: 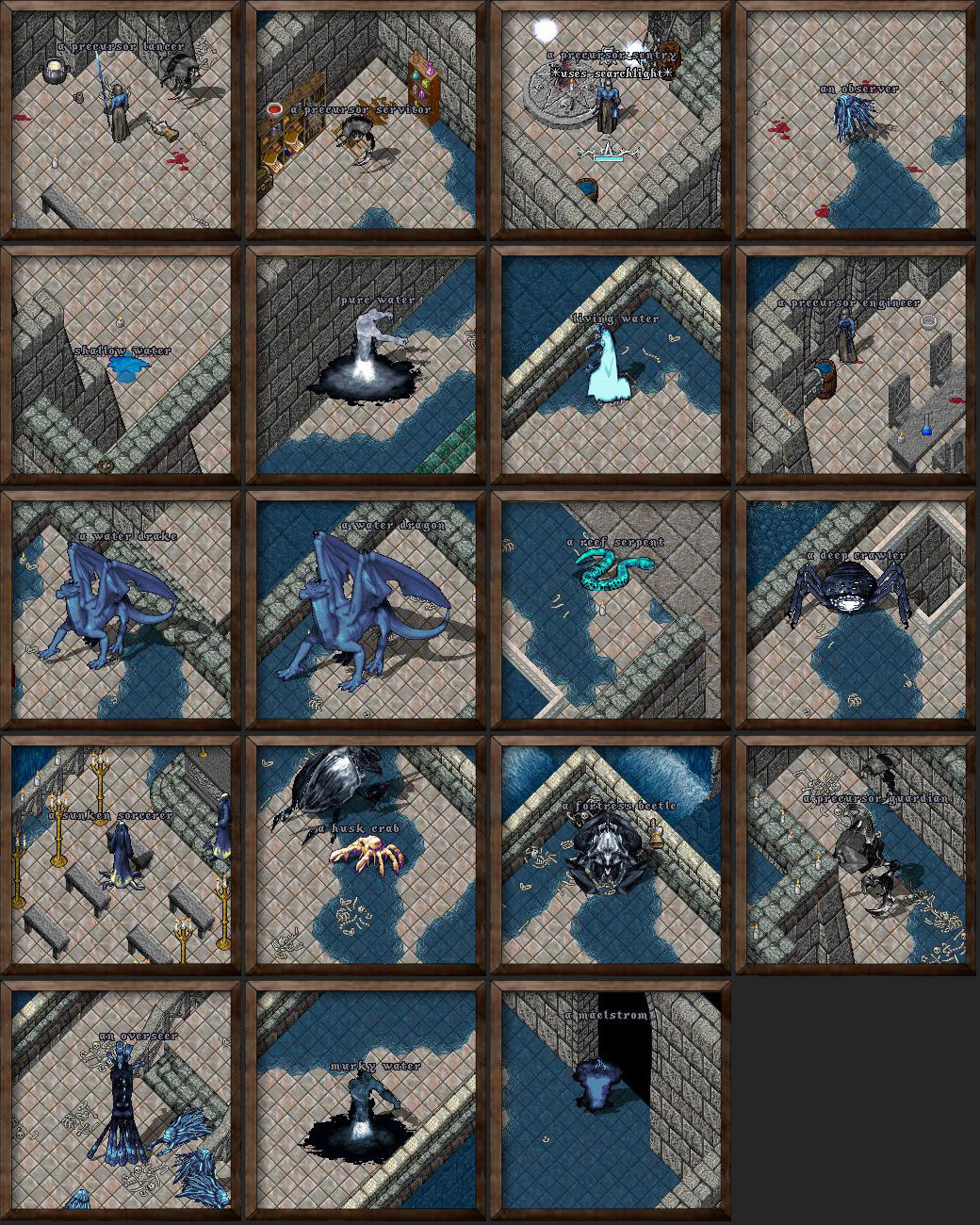 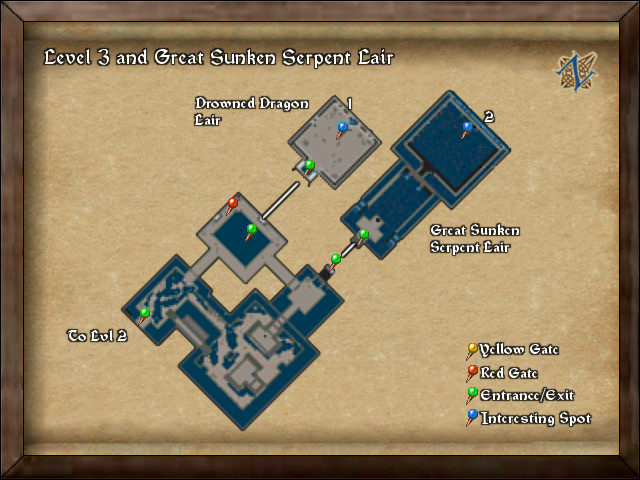 
There truly is not much to say about Level 3 except that you will find stronger natural creatures here, as well as the results of the Precursor’s experiments and their machines. You should not travel down this far unless you are extremely capable of defending yourself!

Should you travel to the northwest corner of Level 3, you will find a pool in the center of the room. Although this pool is full of drowned dragons (I suspect these are the results of some of the Precursor’s experiments), should you brave them and are capable of holding your breath a good long while, you can traverse further downward in a long aqueduct. A connecting channel will ultimately lead you to the Ancient Drowned Dragon chamber. 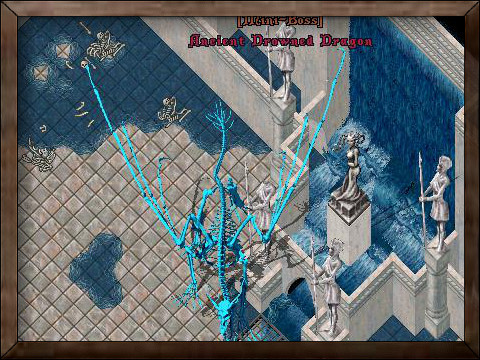 (Blue Pin 1 on the map, the Ancient Drowned Dragon) 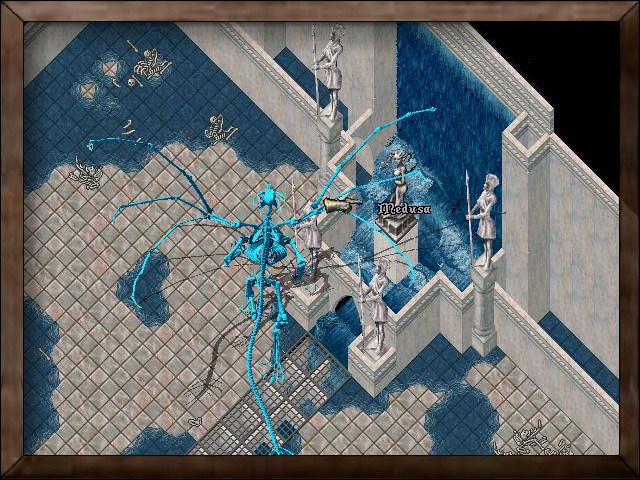 (Blue Pin 1 on the map, the Medusa statue)


And should you travel to the southeastern corner of Level 3, bypass a Drowned Daemon (further experimentation by the Precursors), and plunge headlong through a wall of flowing water, you will discover the Great Sunken Serpent Lair.

It would appear that these great beasts are creatures of opportunity. This great cistern seems entirely untouched by the Precursors; perhaps because it is so well hidden away, or perhaps because they have no need or interest in it. The Great Sunken Serpents created their nest here in isolation. I know little else of these great beasts as I did not venture close enough to hazard studying them. 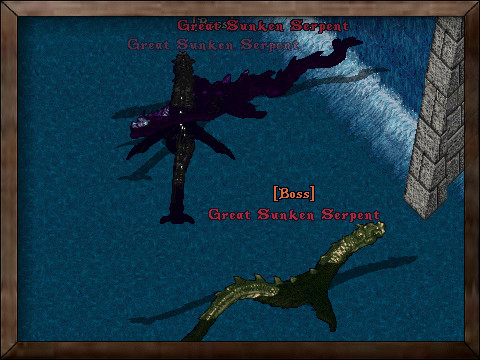 (Blue Pin 2 on the map, the Great Sunken Serpents)


Below are the creatures you can expect to find on Level 3: 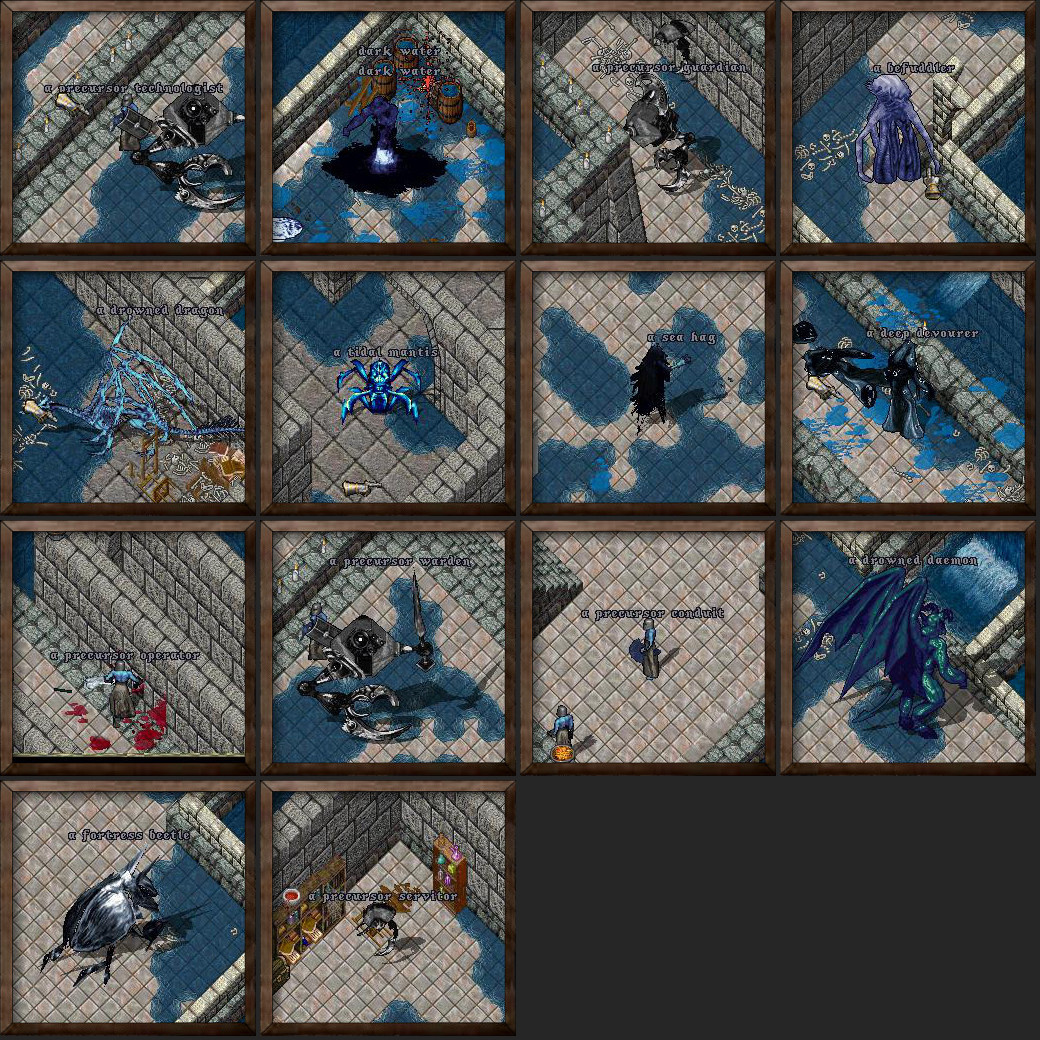 
I would not expect scholars native to only Avadon to recognize the signs of the corruption of Exodus. For the edification of those scholars and any savvy adventurer or explorer who is unaware of Britannian history as it exists among almost all other Shards of the Gem of Immortality, allow me to explain the nature of Exodus.

In Britannia, Exodus (a being created of advanced technology believed to be obtained via time travel) laid dormant beneath the ocean, hidden away after the defeat of Mondain and Minax. It slowly gathered information about the outside world. It slowly learned. Over the course of a few decades, it learned everything it needed to know to emerge and unleash horrors upon the lands of Britannia, ushering in what Britannian historians called the Third Age of Darkness (a time period that Avadon has not experienced, at least not yet).

It is worrying that no evidence of the remains of Exodus had ever been recovered since the fall of Mondain and Minax. This suggests that Exodus still exists within Avadon.

This conclusion leads to the next: The Precursors. For clarification, a “Precursor” is something that comes before whatever is next. The fact that these Precursors have an affinity for, and access to, technology that exists nowhere else in the world greatly leads me to believe that they are the eyes and ears of Exodus. His hands and nose. His senses in which he learns about Avadon. The experiments that they conduct, the observations that they make all allow Exodus to learn, just as he learned in Britannia. There is no doubt in my mind that the sacrifices or offerings made by the Precursor Sorcerers are in the service of Exodus.

And this is what frightens me. For me and the known history of my Britannia, Exodus is an ancient part of history, something that happened literally ages past. But here on Avadon, we have not seen the likes of Exodus emerge yet. There is no way of knowing when Exodus may have decided he learned enough to begin his conquest of Avadon. The terrors he will bring, should he arise, will likely change the world. With no Stranger (the Avatar) to stop him, I am not sure Avadon will be able to resist his will.