Upon entering the region in which the Mausoleum resides, you can instantly tell that there is something incredibly foul about this place. The fetid and rank graveyard nearby is swarming with garden-variety undead, but they are not the menace here. I spied a most peculiar bald-headed man peering down through a window atop the entrance of the Mausoleum. He reeked of death and decay. I was set on edge before even making my reluctant journey here by tales and stories of inhuman aberrations, unfathomable entities, and extremely dark magic. 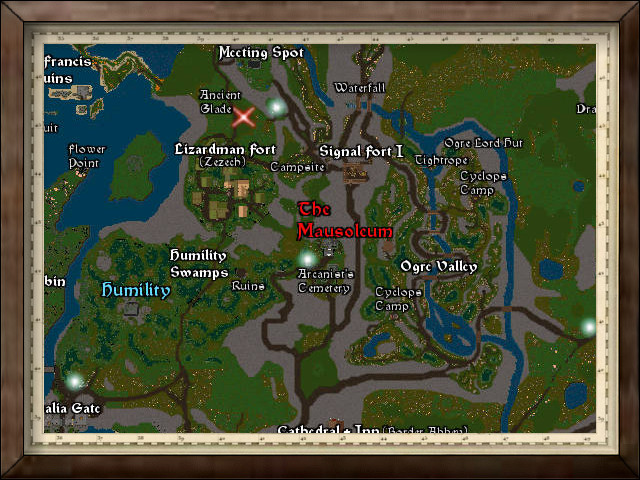 I must admit, it has taken me some time to gather my wits about me after my harrowing journey through the Mausoleum. The things seen are perhaps best left undescribed and forgotten, but with a bit of liquid courage I have pulled myself together enough to relate the horrors found deep within this place that I can only truly describe as a sepulcher of the occult. 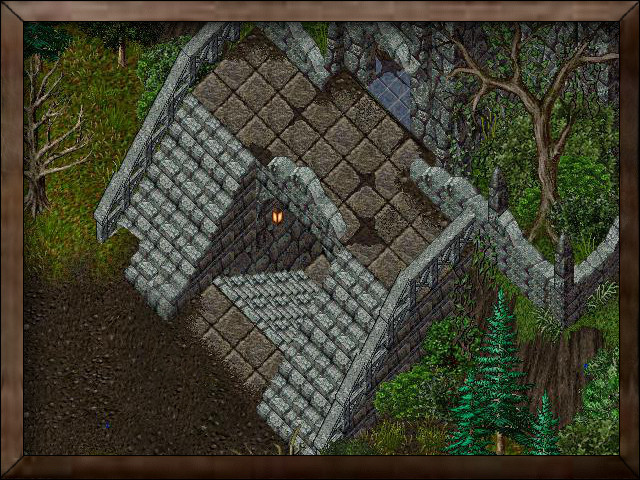 (The Artist's depiction of the Mausoleum entrance)


Read on, adventurer, only if you are true to the Virtues and shielded thusly, for there is nothing even remotely virtuous within the forsaken halls of the Mausoleum. 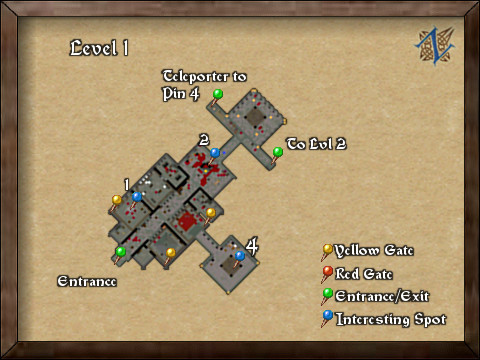 Only a few short steps through the entrance and you will find hints as to the nature of this place. Corpses sewn together from mismatched body parts, bizarre blood-infused reanimations, and ritualistic rooms and altars abound.

The Mausoleum appears to have been, at one point in history, a mass grave for some unknown city or civilization, presumably that existed before the rise of the modern cities of Prevalia, Cambria, and Andaria. However, a sinister cult has entrenched their roots deep here, no doubt drawn simultaneously by the protection of the massive stone walls and the large abundance of corpses to use in their most unholy of rituals and experiments.
When I put the Prevalian and Cambrian locals to question, none were really certain as to what this cult was that resided in the Mausoleum, or their specific intents. Some say that they are mere necromancers practicing their craft, others say they come from another Realm entirely. A few stories state that this particular cult existed before Avadon was shaped into what it is now. Still, a few whisper about how this cult is in service to the Guardian himself.

The methods employed by this cult of reanimators differs from other methods I have borne witness to. The Ossuarians, for example, utilize some ancient knowledge of reagents and poultices to bring the dead back to life; theirs is a more sacred methodology, one that could be construed as an extremely twisted form of Spirituality and Sacrifice. The cult of the Mausoleum is far more brutish and savage, lacking any semblance of the sacred. Dead bodies are butchered like cattle, reassembled in unnatural ways, discarded unceremoniously. It makes me shudder to recall what I’ve seen even on Level 1.


Should you investigate a wayward chamber on the far east side of Level 1, you will see a large number of books piled floor to ceiling. My natural curiosity got the better of me and I flipped through several of these tomes only to discover that none of them are written in the common tongue (nor are they in gargish, orcish, or any other language that I know of). The only parts of the tomes I could understand were some of the diagrams, which appeared to illustrate how to remove parts of the human body.


But, there is more to this chamber than initially meets the eye. On the north side of Level 1 you will discover an alchemical symbol on the ground. This is actually a teleporter! It will bring you to a secret chamber beneath this most unholy library. Within this chamber you will find all manner of evidence of extremely nefarious experimentation: holding cells, body parts, alchemical tools, even burned corpses; presumably finished or failed experiments.

Below are the creatures you can expect to encounter on Level 1: 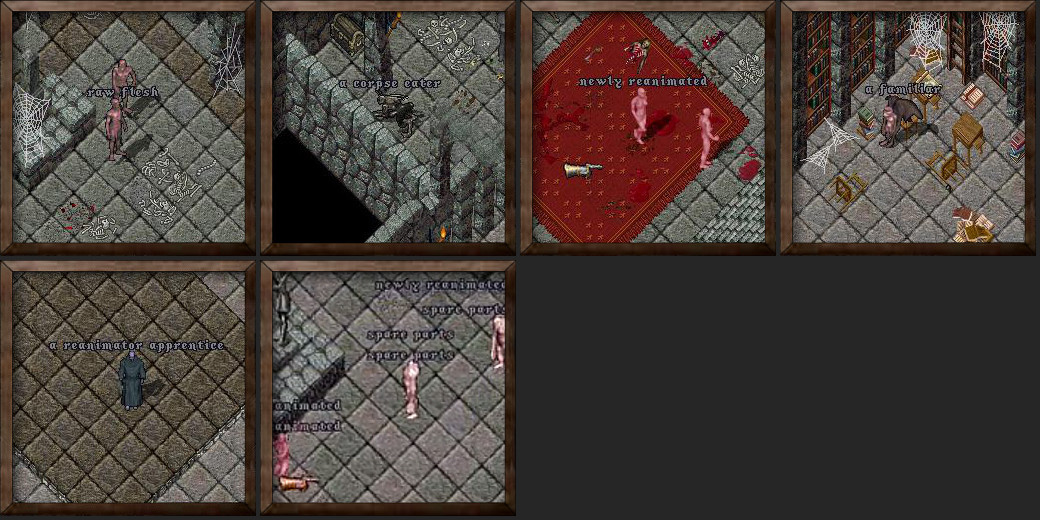 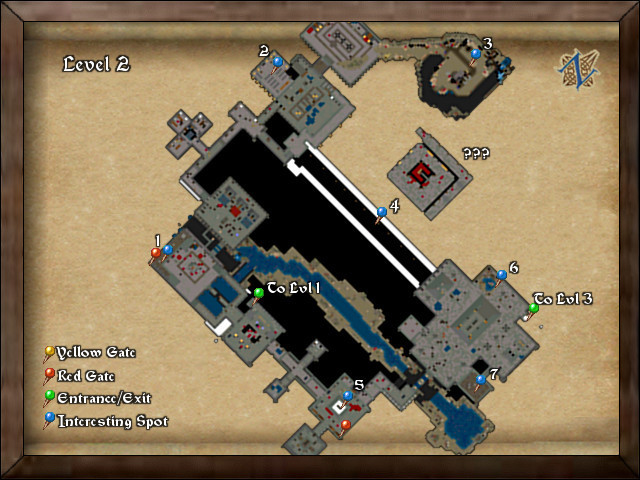 (The Artist's crudely-drawn map of Level 2)

You will find worse horrors as you descend down into Level 2 of the Mausoleum. Strange, twisted abominations made of grotesque flesh freely wander the dark halls here.

On the far western side of Level 2 you will find a large two-floor sept where, no doubt, crazed and wholly unvirtuous black masses are held. This section of the dungeon clearly holds some sort of religious purpose for the cult, though I was unable to witness any rites during my studies. I have little doubt in my mind that outsiders would simply not be tolerated here (and, in fact, might find themselves disassembled for their intrusion).
Should you travel to the northernmost section of Level 2, you will an underground quarry. It is doubtless that this is where the cult mines and shapes the thick blocks for expansions to the lower depths of the Mausoleum. 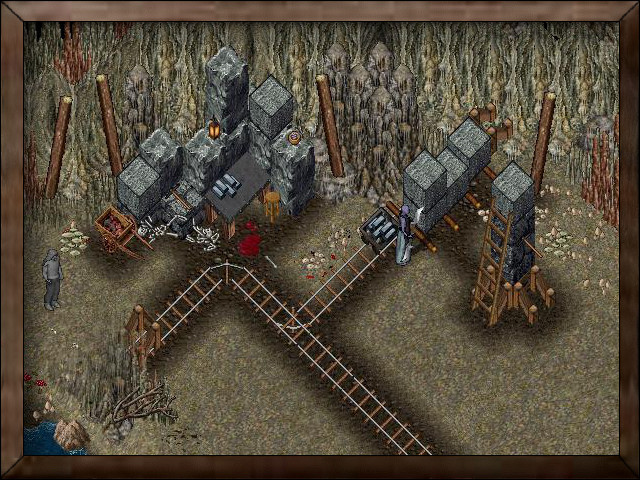 
Here, you will also find the most Elder of vampires. I had to check through all bestiaries known to me to verify this, but there have been no records of vampires appearing anywhere in all of historical Britannia (All three Ages of Darkness, the Age of Enlightenment, nor the Age of Armageddon), making Avadon a rather unique place. I wished I could have lingered longer to study these blood-drinkers, but alas, it was too dangerous to do so.
When you make your way through to the eastern side of Level 2, you will find some truly horrendous cult experiments in the form of living piles of globular flesh! Oh, the torment that these creatures must feel… I can’t even imagine!

A tunnel runs between the western and eastern segments of Level 2. It is easier to spot the entrance on the eastern side, but do be careful as reanimated corpses tend to wander this very long corridor, and there is nowhere to run except back the way you came.

(Left: Blue Pin 4 - a long tunnel connecting the eastern and western sections; Right: Blue Pin 6 - a person on the unfortunate end of a rock fall) 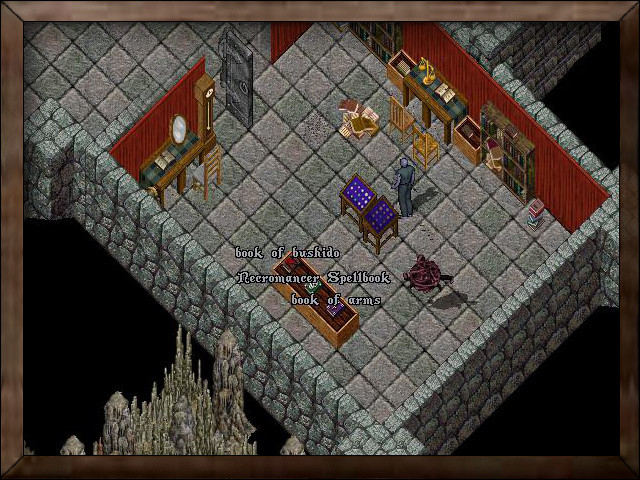 (Blue Pin 7: Strangely, these cultists managed to get ahold of extremely rare and powerful tomes)


Curiously, as I have done my geological survey of the area, I detected an area within Level 2 that SHOULD house some sort of structure. However, I was not able to locate an entrance to it. I will need to consult with a knowledgeable guide to see if there is perhaps some sort of hidden doorway that I may have missed in my explorations.

Below are the creatures you can expect to encounter on Level 2: 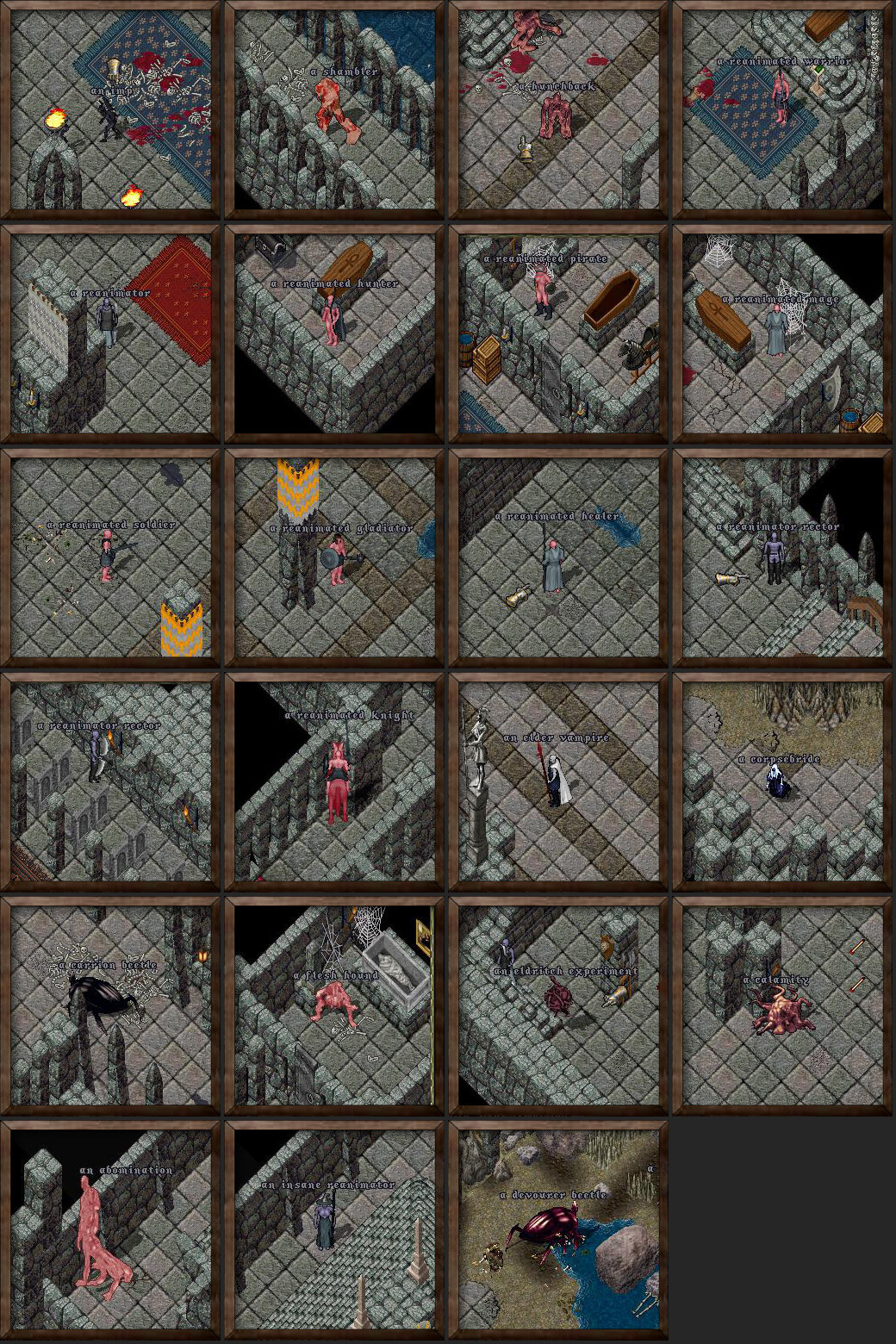 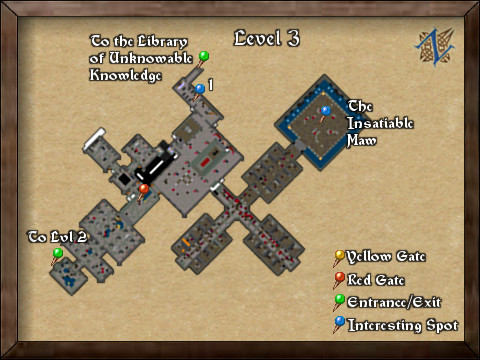 
Down here in the darkest corners of the Mausoleum, you will encounter the eldest and most feral of the cult’s experiments. It is curious to me that I did not espy a single cultist down on Level 3, making me wonder as to the reason. Are these twisted souls hostile towards the cultists? Or are the cultists simply keeping their distance from something? With that question in my mind, I pushed forward.

Much of Level 3 is similar in overall design as the previous levels, though you will certainly find much more dangerous abominations within its halls and cells. There are a couple sections of note, however.

It is said that a giant, writhing mass of tentacles known as the Insatiable Maw emerges on unknown occasions from a pit. Only whispered rumors exist as to what purpose it has here. It is general said that the cult will feed it body parts and failed experiments. Perhaps this is an offering to something that they feel is a deity? I cannot say. I just know that I do not wish to be present when it emerges from its pit. 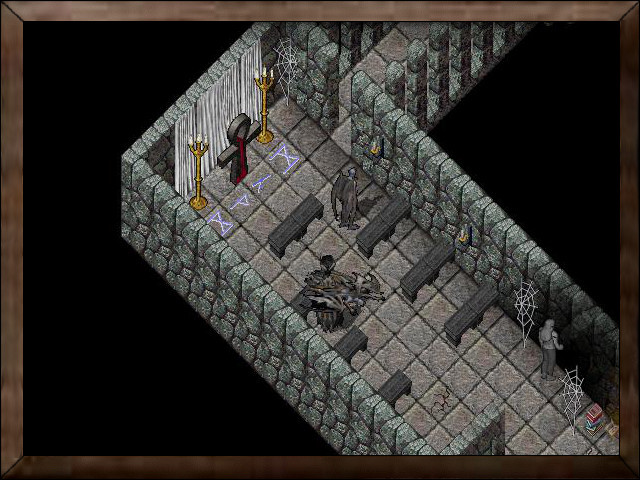 (Blue Pin 1 on the map: A vampire site of worship)


On the northwestern edge of Level 3 you will find a small area for worship. Since the reanimator cultists do not venture down this far, I must ponder as to who uses this… is it the vampires who lurk here? They are seemingly the only truly intelligent beings that exercise free-will on this level. If they are the ones in attendance to worship, then who or what are they worshipping? I suspect that their deity lies in the section beyond…

Below are the creatures you can expect to encounter on Level 3: 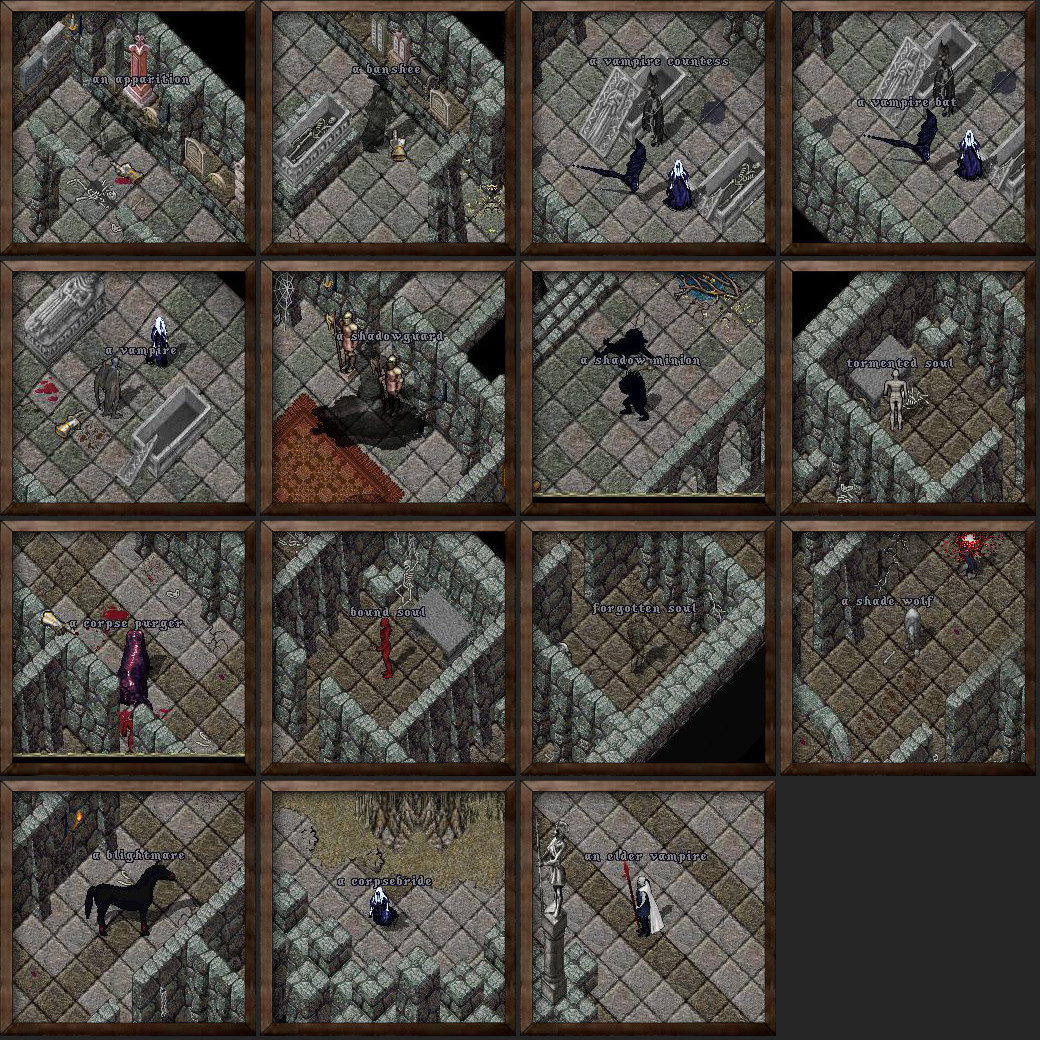 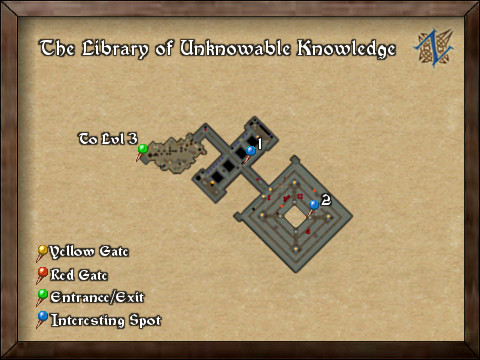 (The Artist's crudely-drawn map of the Library of Unknowable Knowledge)

I first thought I was making my way into another infernal library, as the north and south ends of this area contain many books, but after further investigation I simply can’t say for sure what this is.

I first picked up a book off of one of the shelves to examine it, as I did the books on Level 1. These books were nothing like those. Instead of words, the pages contained shapes, but… they were not real shapes; not shapes that can exist. They shouldn’t exist. They were impossible shapes that, when looked upon, make you go dizzy simply trying to comprehend how they can exist upon the page at all. I could only bare to gaze at the page for but a brief moment before closing the tome, lest I vomit all over it. What could possibly read such books? What could possibly write them, if writing is truly what that even was?

But as I made my way further, I was met with another terror of an incorporeal sort.

I made the mistake of peering through the slats in the stone walls and beyond… was nothing.

I know that must sound truly insane to be so troubled by nothing, but it was not truly nothing so much as an infinite expanse. A distance so impossibly vast, and so incredibly empty that you could scream (as I did) into it and there is nothing to reflect back the sound of your voice; it merely gets swallowed by the nothingness.

I don’t know how long I stood there, unable to not comprehend what lay beyond the slat in the wall, but eventually I came to my senses about a stone lighter, and a bit more stubble upon my chin than I recall having.

I knew I could not stay in this place much longer, but I needed to be thorough since my geological study suggested there should be one last chamber here. I peered into this final chamber on the western side and glimpsed the being that is named only in the hushed whispers of captured cultists as “the Gatekeeper”. Absolutely nothing is known of this entity, nor is it known what this gate is or what lies beyond. I surmise the insanity-inducing empty space is perhaps the gate… but what lies beyond it? I fear to glimpse such things is beyond the comprehension of the mere human mind.


I am not sure what happened next.

I just know that I found myself atop Humility Shrine, soaked in swamp muck and missing all of my belongings that I began my explorations with. Curious, I looked at my journal in which I take extensive notes of my explorations only to find scribbled repeatedly in my own hand “It is coming.”

What this could mean or refer to, I do not know. I just know that I will not venture back into the Mausoleum again.