For all RP guilds, feel free to make a post in this thread about your guild, its history, its motivations, etc!

Overview: The Knight’s Guild is a collection of chivalrous (not the skill) warriors, friars, and crafters who have sworn to uphold the Knight’s Oath: Uphold the Principles, Maintain the Virtues and Observe the Code of Chivalry. The guild is broken into three separate orders.

History: Originally of another world the knights, whilst constructing a new fortress, are transported mysteriously to a new land. The knights create the fortress, now referred to as Nusero, and tame dragons to guard it. Eventually a second expedition of knights sets out from the old world to the new, only to discover much time had passed and the original knights were lost, the fortress fallen and the dragons who were their protectors are fiercely defensive of the fortress. This second expedition sets out to explore the new world and eventually leave Nusero island and construct the Fortress of Hailstone, east of Prevalia. From this bastion of virtue the knights begin to rebuild and further their reputation as defenders of the virtues throughout Avadon. 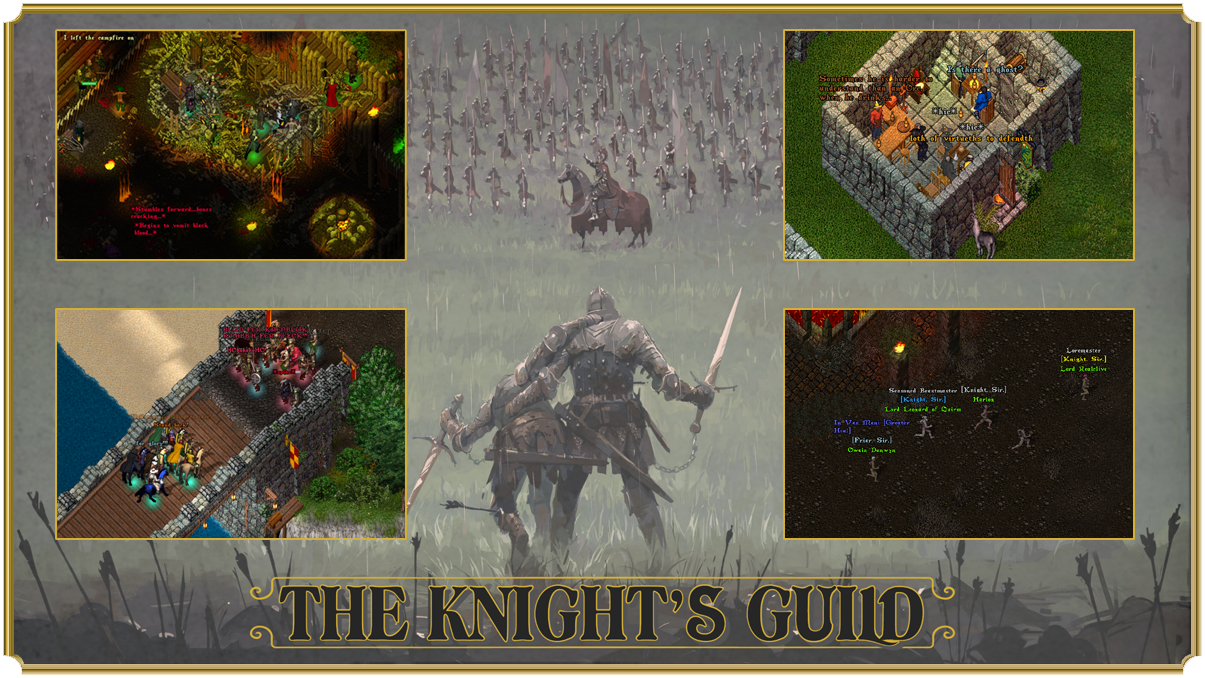 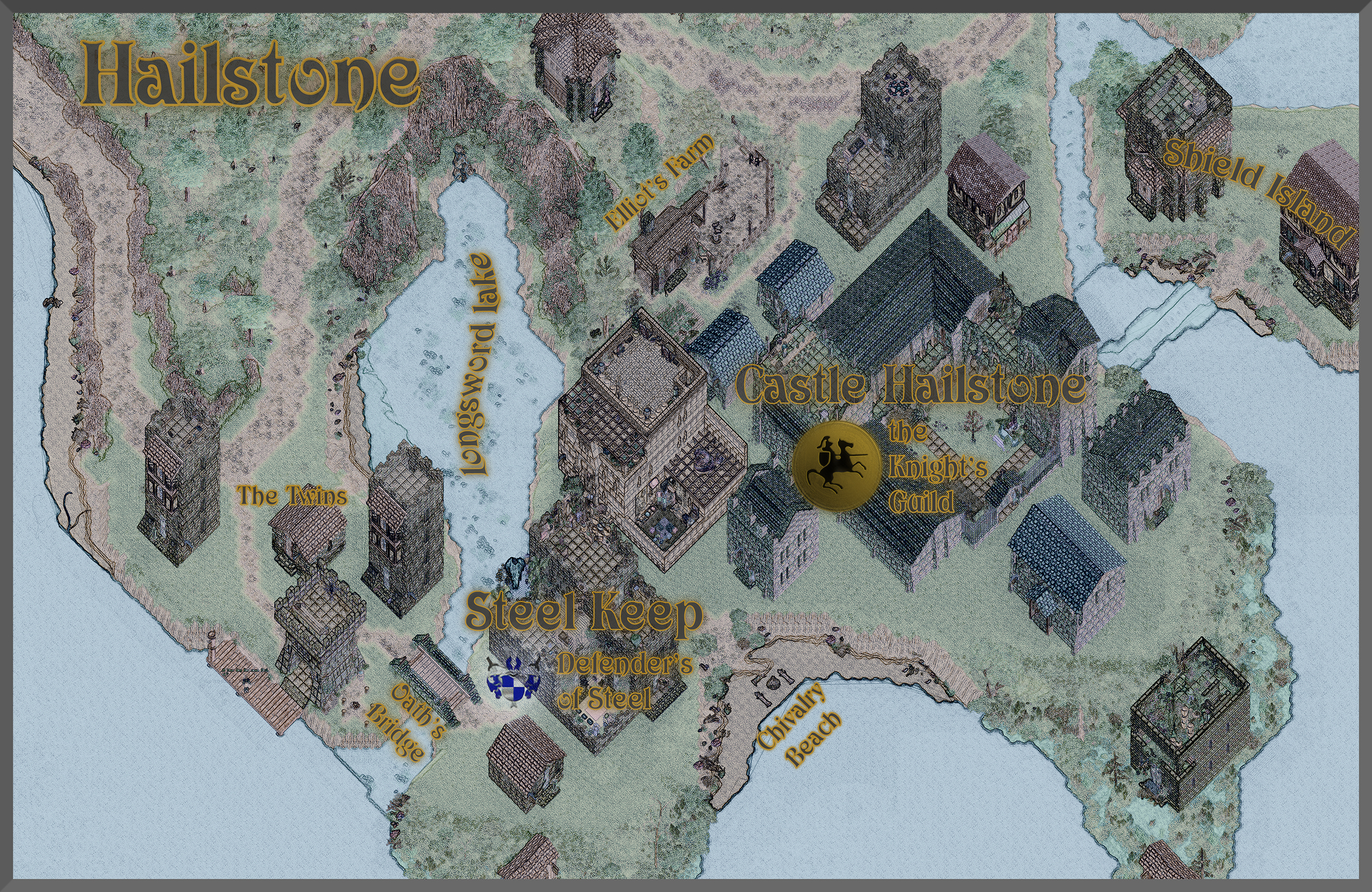 Overview: The Pathfinders is a collection of warriors, rangers, craftsmen, peacekeepers, artisans, citizens (practically any type of character) that have sworn to not perform criminal or murderer actions (meaning that no reds allowed even on other characters). We swore to uphold peace in Avadon and settled in Haven (not to be confused with the Shelter Haven which is across the sea at the west of Shelter Island). While the guild has no official structure, it consists of roleplaying paths that people join to be part of and find ways to help another and those in Avadon.

A depiction of Haven can be found below, and is easily accessible from the POI Sacred Waters which is Southwest of Haven or POI Cathedral and Inn which is located at Northeast of Haven and is protected by Haven peacekeepers.

History: The Guild and Village is founded on the site of the last stand of a contingent of the Prevalian forces ambushed by a Ratman army near the location known as the Sacred Waters, the most pristine water source in Avadon between 2 key mountain ranges, during the events of “A peace that never was”. Local Rangers, Woodsman and Sailors came to their aide and in the chaos that enveloped the land they built and defended Haven. As time passed the village grew and need arose to defend itself and the roads on which they travelled. This story and more may be found in the Haven Library. Over time their numbers increased as they recruited folks of every profession, founded new paths such as the Ranger Corps, the Arcane Academy, the Order of Virtue, the Artisan's Path, the Monster Hunters, the Ship People and the legendary Peacekeeper Corps, who frequently patrol and hunt murderers to rid evil of Avadon.

A more detailed account of our foundation is here:

A Pathfinder Ranger Rummages through the books stolen from their allies, finding the one described to him. "All that trouble for a book, hrrrm I wonder." He mutters to himself as he opens it, careful not to get Orc Blood on the pages. The battle was dire for the few that had survived the...

Today, Haven thrives as the Pathfinder community continues to work together on all fronts. The Miners, Woodsmen and Fishermen of Pathfinders are renowned for their strength and tireless efforts in supplying the lands with the raw material it desires. The quality of goods and equipment produced by their crafters have become known throughout the lands. Even the most fearful of creatures deep in the darkest dungeons have felt the wrath of the Pathfinders mighty Monster Hunters. The Ranger Corps and Peacekeeper along with our strong allies patrol the lands and dungeons for murderers and attempt to bring balance to a land ripe with chaos and destruction.
Last edited: Jan 7, 2022
L

History: All that is known of the history of the guild comes from a book that was passed down through the generations to the current guildmaster.

Following the Orcish ambush in 184AC that led to the end of King Calym I of Prevalia, King Arryn decided to eradicate the lands of all monstrous humanoids. The Prevalian military took up arms and swept across the land, banishing the tribes of the lesser creatures to the holes they crawled out of or wiping them out entirely.

During this time, some of the tribes decided to organize and push back on the good peoples of Avadon, burning villages as they went. The small village of Willowdale was the last standing haven, a small hamlet, where retreating villagers could rest in safety on their way to Prevalia city.

A group of farmers, hunters, and craftsmen armed themselves and decided to defend the village at all costs until everyone made it out safely. Led by Azemar the Blacksmith, the band was able to hold back the hordes for 3 days, until everyone made it out safely. Retreating back to Prevalia themselves, the horde nipping at their heels every step of the way, they made it with minimal casualties.

Due to the outstanding leadership of Azemar and the courage of the defenders, King Arryn knighted them all and created the order of the Knights of Ultima. Leaving Azemar as the first Grand Master. Throughout the years, the knights developed a code of honor, training regiments, and alliances with many other orders. Vowing to protect the lands from the monsters of the world.

Around 491AC when the civil wars started between Andaria, Cambria, and Prevalia, the Knights of Ultima were tasked by the empire to aid Prevalia in retaining control of Andaria and Cambria. However, the knights vowed to protect the lands from monsters, not fight the people they swore to protect for political gain. With this, the current Grand Master at the time, Jocelin, decided to disband the order.

*The remaining pages contain runes that are unreadable at this time*

Currently: Almost a century and a half passes, the memory of the Knights of Ultima fading into fairy tales and folklore. That is until a young man learns of his lineage and decides, with the coming of the new orcish hordes, packs of ratmen, and troll clans once again terrorizing Avadon, that he would breathe new life into the order. The Trustworthy TankRage set out to dust off the old tomes and start recruiting, building the order back up to its former glory.
You must log in or register to reply here.
Share:
Facebook Twitter Email Share Link
Menu
Log in
Register