​
The allure of the Mount Petram is one that beckons far and wide to explorer and fortune-seeker alike. However, it seems very little is known of this place or how it came to be. It is not entirely clear what mysteries lie deep within, for we cannot know what we do not know. After my travels through this monstrous cavern, I must state that I do not feel particularly confident in my ability to answer the mysteries of this place. 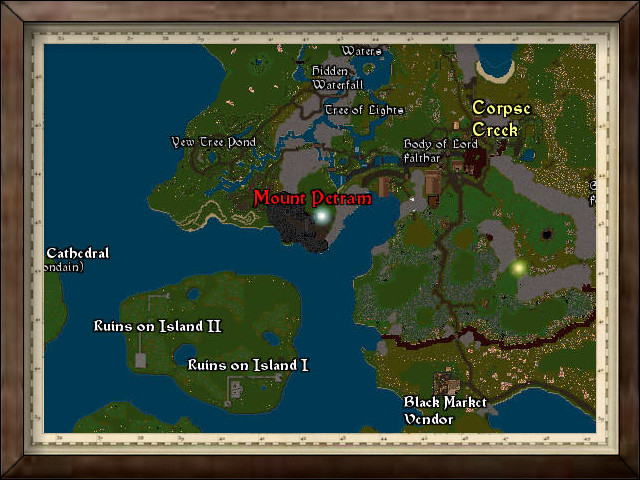 Upon initial inspection of the entrance area to this dungeon, it is easy to notice that the type of rock in the area is different than the surrounding lands. Instead of being of atypical sedimentary rock, Mount Petram appears to initially consist of igneous rock, particularly andesite but upon closer examination I suspect that there is a great deal of regional metamorphic rock, which forms deep underground and can emerge when subjected to immense pressure. This would make the name “Mount Petram” particularly on-the-nose as, when translated, it means “Mount Rock”.

What this suggests is that Mount Petram did not form like most mountains, nor did it necessarily erupt into existence like Inferno. Instead, much of it formed deep beneath the surface and something occurred, most likely naturally but there is no guarantee of that, which created a huge amount of pressure in the area, thus forcing a large bulge in the earth that we now know as Mount Petram. 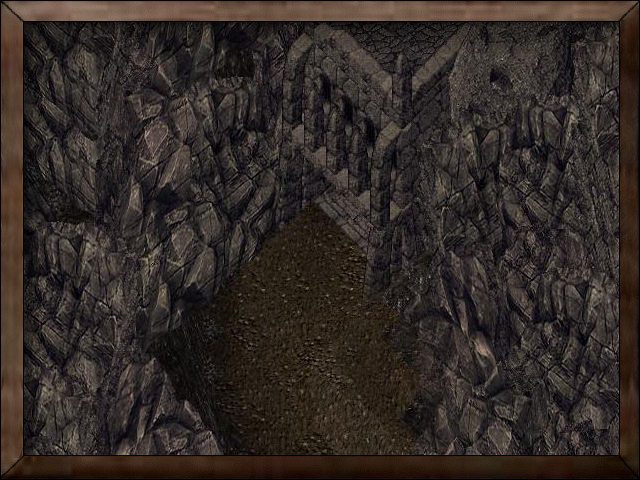 (The Artist's depiction of the entrance to Mount Petram. Note the unique rock structures.)


The unique features and strangeness of this mountain seems to have attracted a number of creatures, both intelligent and not, to take up residence within. There now exists clear evidence of man-made structures chiseled into the rock, though I can’t be sure exactly how old these are, or their origins. 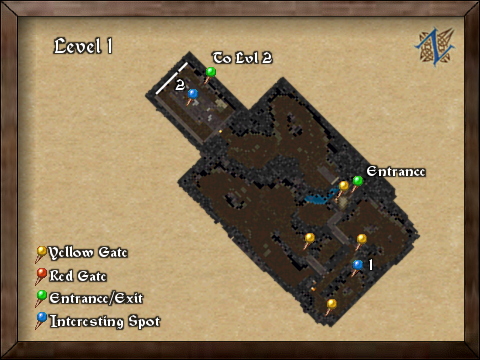 
When you first step into Mount Petram, you are greeted with a sprawling cavern with high ceilings and a myriad of pathways that lead around to two separate segments of Level 1.

You can expect to find some wayward Terathan drones and larva here, as well as a nest of harpies on the easternmost side. Wandering about the south-western edges you can find a series of “lesser gem elementals”, ambulatory humanoids consisting of tourmaline or citrine, though I heard tale that there were some made up of amber as well, though I did not spy any during my explorations.


In the far-western reaches of Level 1 you will discover a large man-made platform guarded by some old relics of unknown origin. These are the first real signs of whoever delved deep into the earth, though their intentions simply are not known.

Below are the creatures you can expect to find on Level 1: 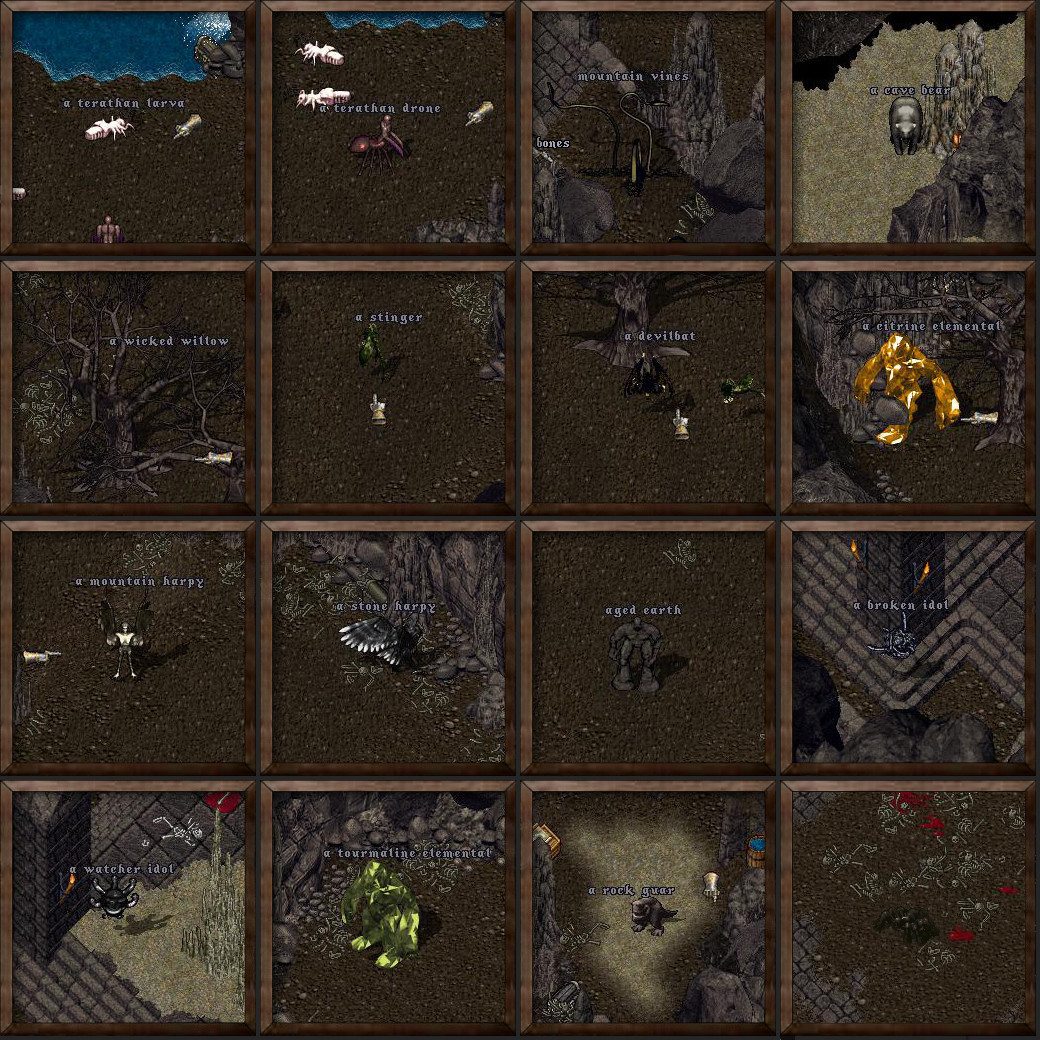 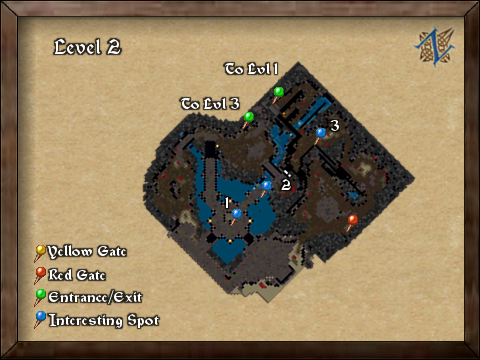 (The Artist's crudely-drawn map for Level 2)


My first impression upon entering Level 2 of Mount Petram was that it reminded me an awful lot of a similar location I once knew in Britannia: the dungeon Shame. Geographically, both dungeons occupy roughly the same areas of their respective worlds, though I do believe Shame was a mine in origin, whereas Mount Petram does not have any such evidence of such. But what really hardened my suspicions of similarities was the abundance of elemental beings that can be found throughout both dungeons. Perhaps a mere coincidence, or perhaps what is known as Mount Petram in Avadon is the twisted and deformed version of Shame in Britannia. However, that is about as far as the similarities go, it would seem.

When looking upon the map, Level 2 is deceptively small. That is because the dungeon level folds within itself at the center! Beneath the entrance area lies a Dusk Dragon roost, which appears to be man-made given that the stones are hewn and shaped. Perhaps these Dusk Dragons were brought here by the same people who carved out these structures, or perhaps the Dusk Dragons moved in after those people were gone – or maybe even chased them out! 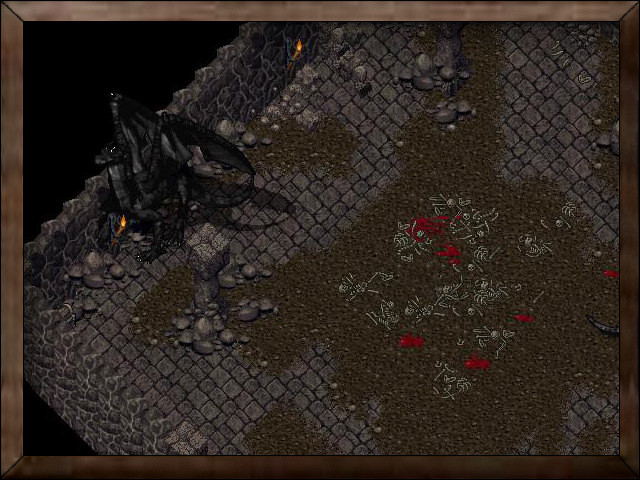 
The first semi-intelligent humanoids can be found lurking around the center of Level 2 here. Minotaurs are tribal creatures, where there’s one there are usually others. They are primitive and vicious beasts, so do be cautious when approaching. They do not seem to speak or even understand the common tongue, so communication is difficult to impossible.


Also at the center is a very interesting monolith. Carved within its stone face are markings not radically different than that which can be found near some druidic circles. It is possible that whoever carved these structures out of the Petram stone were druids or had a strong affinity for the earth, which would make a great deal of sense considering the location and its unique attributes.

Below are the creatures you can expect to find on Level 2: 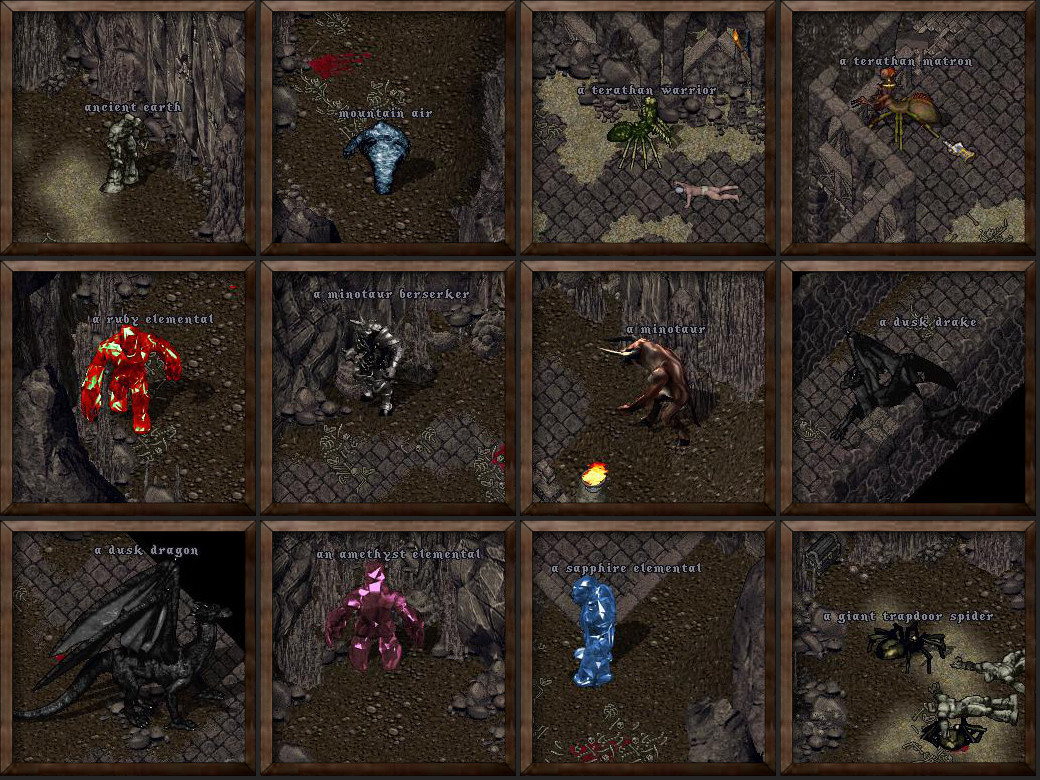 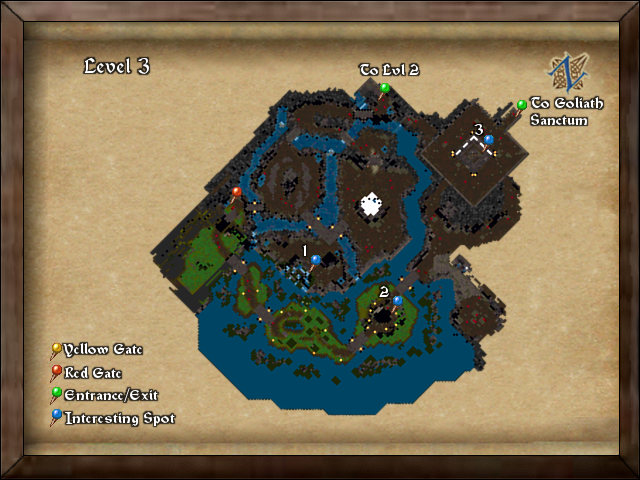 
Although the pathways on Level 3 are somewhat narrow and winding, the entirety of the Level is huge, roughly the size of a large town. You could see clear across the entirety of this level if your torch or lamp is bright enough, as there are few natural or man-made walls throughout most of the area.

You will also notice that the temperature here is warmer and the air moister, though neither uncomfortably so. In fact, as you venture past the more developed Terathans and Minotaurs, you will find all sorts of strange and exotic (not to mention dangerous) vegetative life thriving!

It can’t be understated that there are certain aspects of these places so far below the surface that are simply breathtakingly beautiful. It is easy to let your guard down and indulge in the sights and wonders that fill this monstrous cavern, but it would be foolish to do so because the creatures that dwell down here are old and powerful.


One of the most mesmerizing and intriguing creatures I discovered here are known as the “Volt Wisps”; how they relate to the normal Wisps is unknown. It is also not clear if they are connected to the Xoronite dimension or share a hive-mind as Wisps do. I would like to study these creatures more, but it is a very dangerous task, one that I do not believe I am suitable towards.

As you make your way around towards the north-eastern side, you will encounter something peculiar. A magic circle and a couple of Petram cultists. As far as cultists go, these do not seem to be overly numerous, and their infatuations seem to be focused on a specific form of earth daemon, known as the Fen Daemon. I surmise that these cultists are perhaps descendants of those who initially carved out the structures within Mount Petram, though it is impossible to say for sure as they are extremely secretive and hostile towards any interlopers. 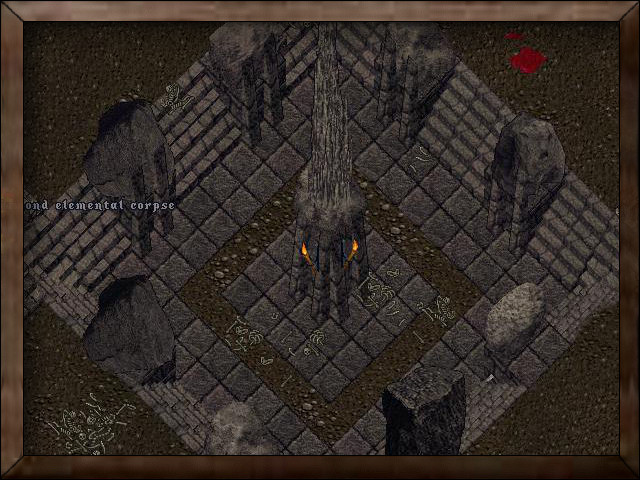 (The Artist's depiction of the Lodestone's Chamber (Blue Pin 3))


Beyond this magic circle you may encounter what is known as the “Lodestone.” This is a form of ancient golem it would appear, and very strong! It is said that it attracts metal, and any compass within its vicinity will spin wildly. What purpose this being serves is unclear; it is possibly a remnant of the people who carved out these halls, a guardian left to protect something that nobody now remembers. 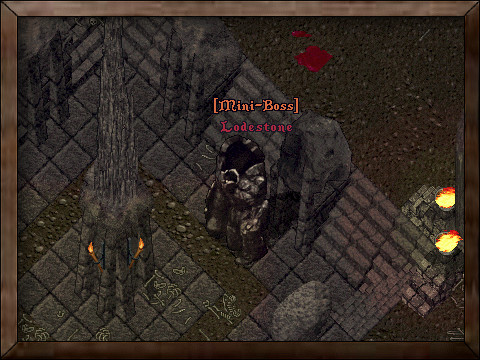 (The Artist's depiction of the Lodestone)

Below are the creatures you can expect to find on Level 3: 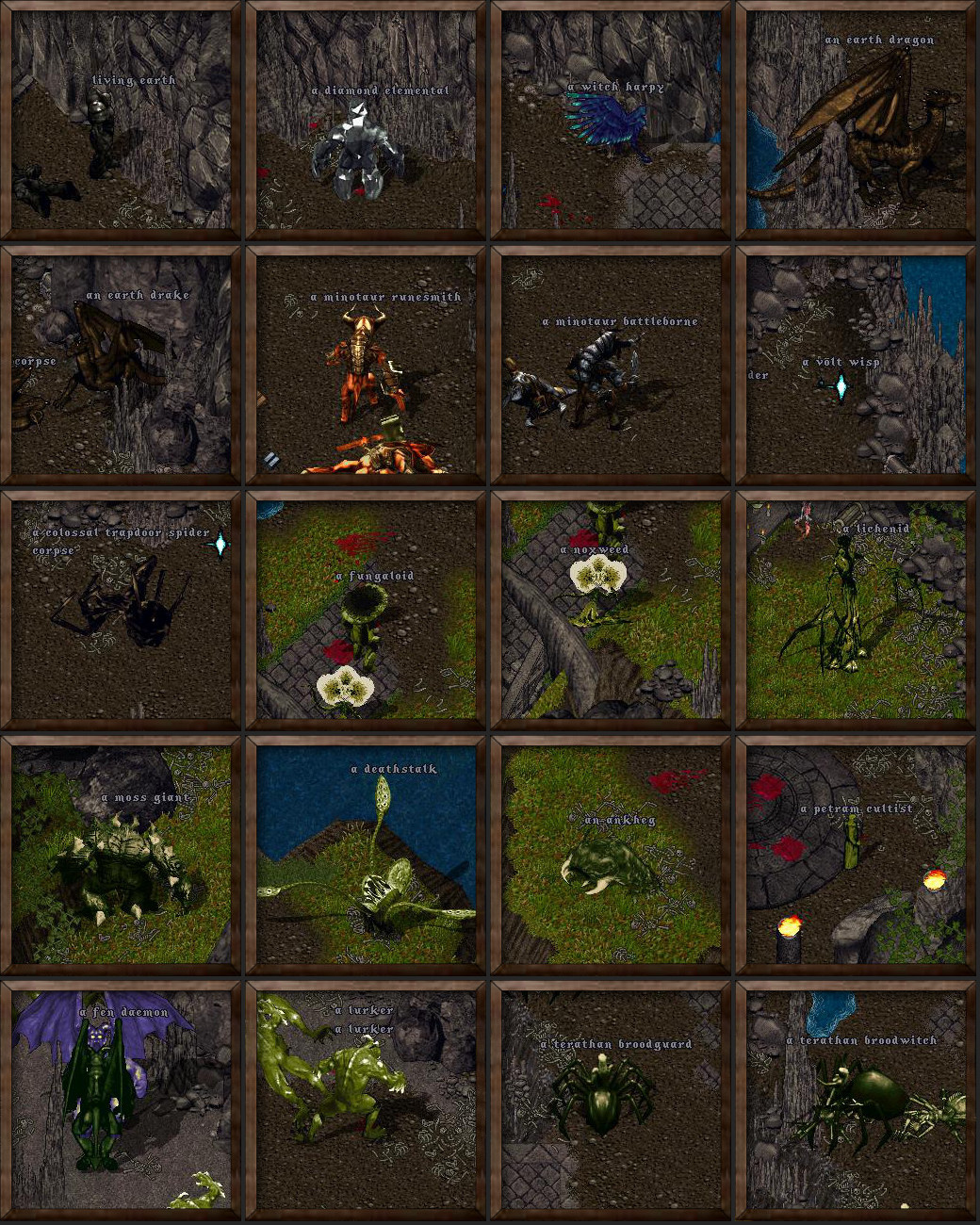 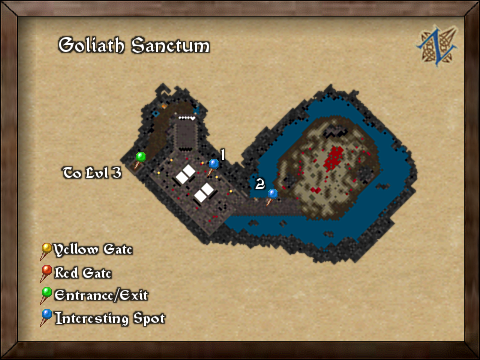 (The Artist's crudely-drawn map for the Goliath Sanctum)


The deepest known segment of Mount Petram is a grand, man-carved sanctum. Here we find very interesting idolatry that simply does not exist anywhere else throughout the mountain. The man-made idols elsewhere are crude, covered in druidic runes. The idols in this one area are intricate and massive, reflecting the artistic stylings of modern sculptures as opposed to the primitive deifications of the previous. Not just the statues, but the very stonework itself is far more refined here. It is quite possible that this segment of cavern was carved closer to present day than the other segments. Perhaps the Petram cultists have taken upon themselves to continue the work of their ancestors?

I could not recognize the stone figures. No doubt they are of great importance to those who carved them, but they do not bear resemblance to anybody of import as we would associate with on the surface.


At the heart of this colossal cavern lives the Terathan Goliath. Very little is known about this massive beast. It is also not known if the Goliath is in servitude to the Petram cultists, or maybe is the reason why so few cultists remain. I did not wish to linger to find out! 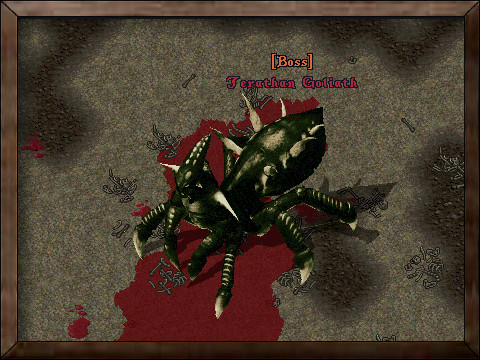 (The Artist's depiction of the Terathan Goliath)

This mountain is a truly unique place, as far as the dungeons of Avadon are concerned. It is both terrifying and beautiful, dangerous and idyllic. Parts of it seem ancient and old, whereas the deepest portion feels almost new in comparison. It is a lot to take in, and a lot to consider.

There is no doubt in my mind that this place initially developed naturally. No doubt, over time, creatures came to nest within the caverns. The unique way in which this mountain was created, and the materials it is made of seems to have attracted more primitive ritualists who, over time, perhaps developed into a more modern-day cultist. The carvings and runes on Level 2 deeply suggest a connection with the earth. The idols in the Goliath Sanctum remain a mystery.
Last edited: Feb 28, 2019
S

This is so cool!
P

Great job on this. Love this dungeon, and this was a great read!

And yes, the naked guy... It is exceptionally hard to get images of some of these monsters that are not full of players. It seems like whenever I go stealthing around to snap pictures, there are hordes of people curb-stomping all the baddies! Sometimes I have to wait for respawns.
Last edited: Feb 26, 2019

Staff Member
Well done, thank you for taking the time do to this!
Z