Received two Alarcity scrolls after server came back up

#1
Edit:
Luthius clarified in Discord that receiving two alacrity scrolls was intended. One gives a 24 minute buff (the short duration set accidentally), and the second one gives a 24 hour buff.
Apparently the word is 'alacrity' not 'alarcity'. I've been saying alarcity in my head my whole life and now I don't know what's real anymore.
/Edit

Considering the circumstances with which we were kindly gifted these Alarcity scrolls, I felt I should post about this right away. Screenshot included below. 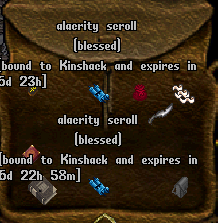 Let me know if you need any more info! My Discord tag is Tanarus#6443 if you'd like to contact me through that.

Thanks for the wonderful shard, and sorry that the last 24 hours have been such a headache for you all.
Last edited: Mar 25, 2020

Staff member
#3
They weren't on the server anymore but given the situation, we decided to reintroduce them. Due to possible sleep deprivation, Luthius accidentally created a 24 minute one and then made the correct 24 hour one. Enjoy the alacrity scrolls!

#4
Dumb question, what do they do?

Found this, is it the same?
"A Scroll of Alacrity (SoA) will enhance gains in the skill listed for 15 minutes. When used, you can gain up to 0.5 at a time instead of the normal 0.1 point." 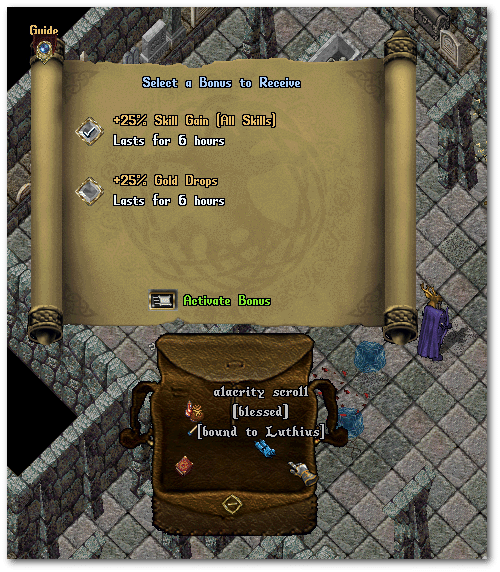 #6
Expo said:
Bonuses
Players may choose from the following bonuses:

Click to expand...
Ah, thank you Expo! Very cool of you guys, especially given the circumstances.