It was a cold, dark, fear-inducing night but in the spirit of some... reason unknown to me, the undead of the frozen northern wastes have opened their bloody tavern of typically thought of horrors to the mundain, average folk of this land.

And I would not, for one, let such a opportunity slip past. Many several moons now I have been in search of, Lady Elyzira in my scholarly pursuits.
... and others for more personal reasons.

Either way, I knew interesting, if not informative conversations would be had over mugs of blood & cider.
The air was oddly warm, and inviting, perhaps temptingly so, while fresh snow fell from a rich blanket of clouds. I asked, Smyth if she minded being left out in the cold, but I could not coax her into speaking; her vows of silence unbroken.
I reached for the knocker on the great tower's rime-covered door, but before I could a pale skinned-woman opened and greeted me, 'Ah... a mortal visitor...' her hungry eyes leered a bit to long, ' Please, come inside. You must be cold.'

I will not ever have any say the vampires are anything, but kind as a host. Indeed.. the only person concerning among them was as far as I could tell human though perhaps a bit... touched.
Before I could be seated he jumped before me, beckoning for me to open a box; that several treasures could be found inside. What did I have need for treasures? Especially when already belonging to my hosts? I greeted and thanked him before taking a seat as, Lady Morwyn, I would learn was her name, gestured too. She offered me a drink, and waited to see if I would. Chilled wine, and nothing more. While perhaps poisons are a favored weapon, they are true to their duties as 'host'.
A woman I would learn to be, 'Ruth' were a few moments behind my arrival. An impressively graceful woman I would think to find in a court of nobles than here drinking ale, her feet resting up on a chair's neck, in the frozen wastes. While I have nothing against the lady-herself, I could not trust her enough to take my eyes away for long.

Lady Morwyn lit a fire, 'Saying many more would follow; I can hear them now...' and seemed to be listening to something far away. I can only guess as to what distance a vampire's ears could pick up sound, but considering the next few guests didn't arrive for roughly a quarter of an hour, I must assume -FAR-.
Before they arrived I asked for the reasons I came, 'Lady Morwyn, have you any news of Lady Elyzira, or Lady Natalia?'. In the bright fire the lady lit I could see her brow raised with interest; she had no idea that I was on regular speaking terms with her kind. Unfortunately.... Lady Natalia was likely not to attend, and... 'And what of, Lady Elyzira.'
'She has joined the Void.' the vampire woman said casually; dismissing the matter with a wave of the hand. My heart sunk low indeed. I remember meeting the ghouly, if whimsically, wise-woman years ago in, Haven. Since then she had taught me how to tap into the Void as a student, and was quiet the conversationalist aside.
'... I will miss our conversations.' 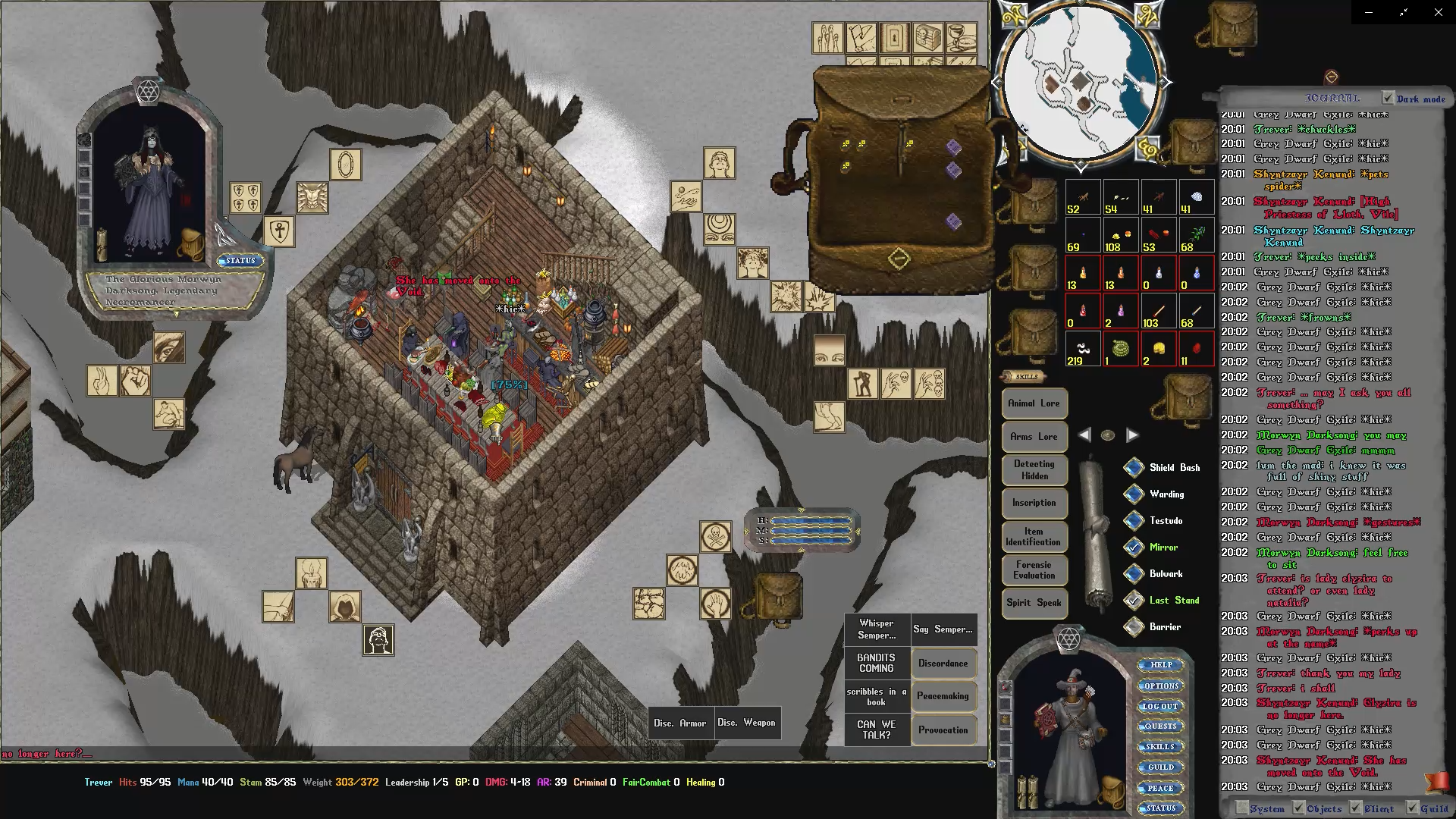 I saw a shimmer of power-hunger in the lady's eyes, 'Perhaps I could teach you more...' always looking for more powerful members to her cause, or at least another blood-slave. Not so different than any other ruler I thought to myself. Still, there is nothing inherently wrong with that. I politely declined, prompting a smirk, like a cat that found an interesting toy. If I had to guess, she was intrigued that a mortal refused her invitation.
As the conversation between us winded down, the other guests that, Lady Morwyn mentioned began to pour in: Wargs, Bloodrock, a seemingly poor begger, or serf bearing the knight's crest 'Zwellington' he said was his name.
There was much in terms of small-talk, threats, drinking, retching.... orc-kin are passionate when they let-loose and there was a few fights, still the worst of the injuries came when someone would get curious of what was inside the box, a raving mad-man had set about.
Suddenly, however... an explosion from outside; immediately before the tower. From the center of a black pentagram he formed and strode before the tower; leaving flames in his wake that seemed to absorb light within the space of the flame. 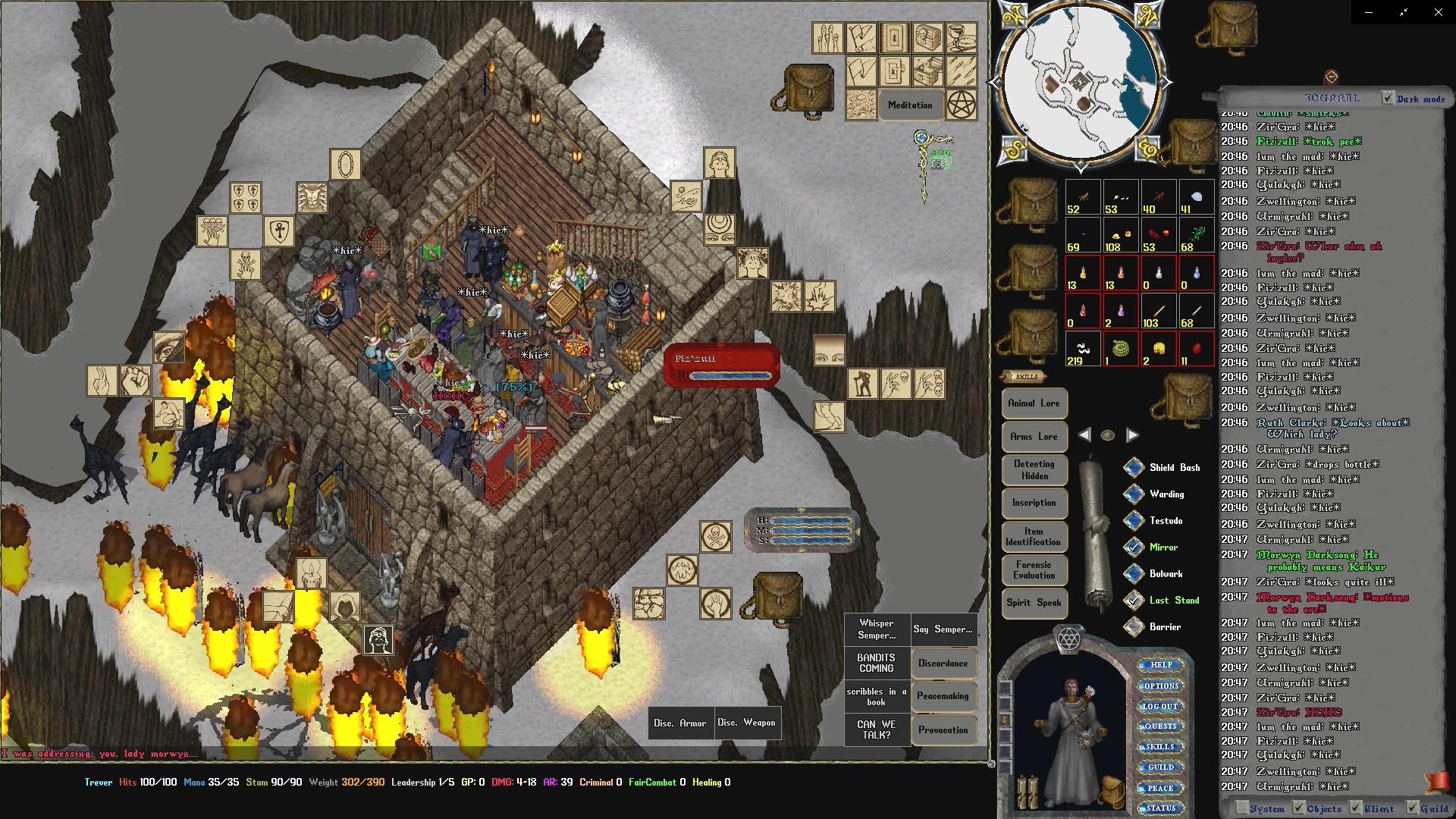 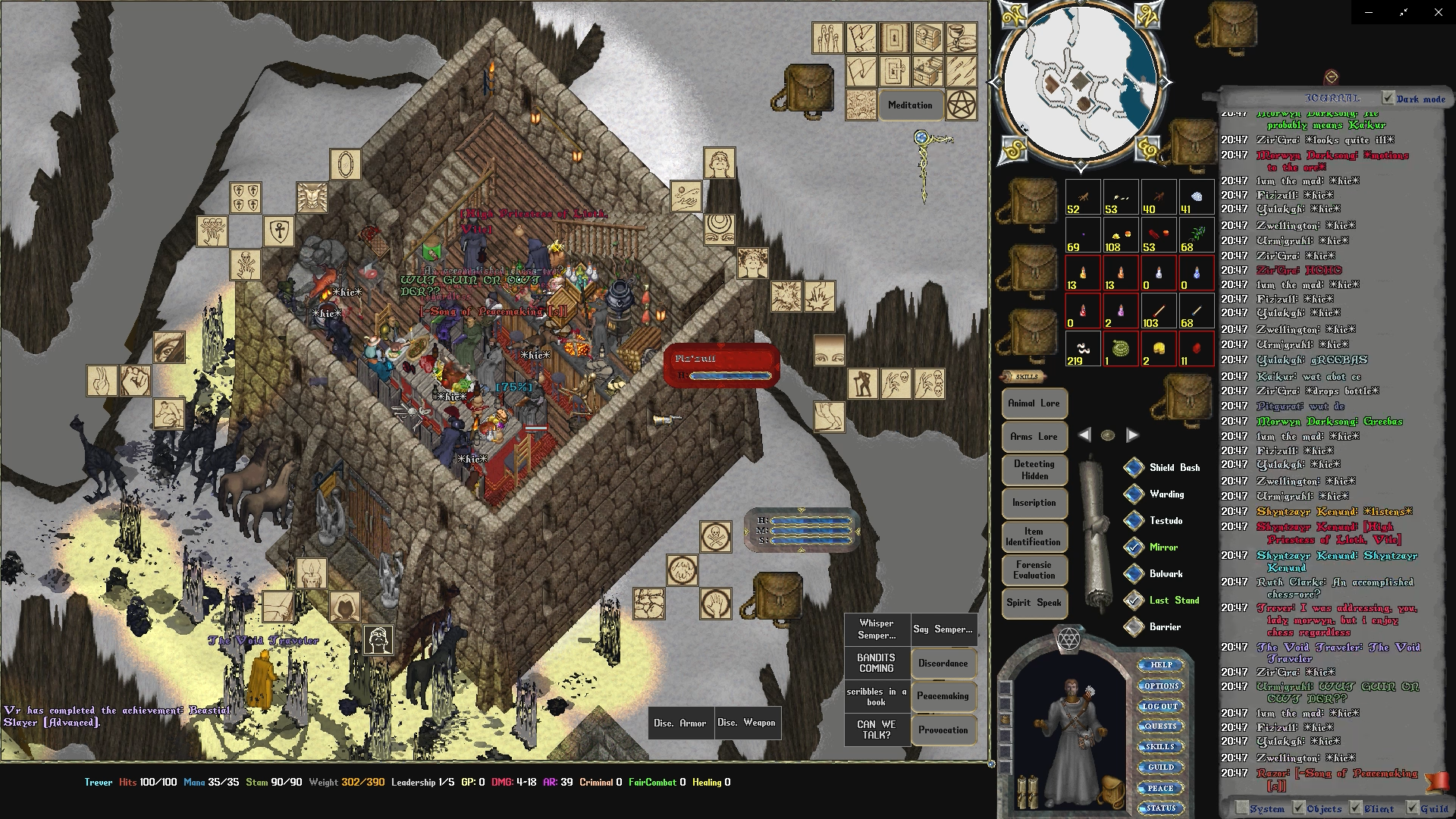 I can't say for sure what may have been happening during this time for only that stranger held my interest. Who was this man who screamed in the Void, but only wisp-fully spoke?
He raided the bar looking for a drink, but seemed not to find what it was he was looking for. A moment later I placed a bottle of fine wine in his hands after speaking with the barkeep. The strange-man perked up instantly, thanking me for my offer and apparent taste (seemed he was a fan of wine) before sitting down opposite of myself.
A nagging voice in the back of my mind urged me to try to engage this man in conversation in hopes of tapping into knowledge not normally available to mortal kind. After-all, there were a few within the Void I was curious about.
Sadly, he had no news of the, Lady Elyzira, but of another...

'Lady Minax? A true champion of, Chaos!' he said of her, and nothing more.

However the, Lady Morwyn spoke to me, 'I see your research mirrors my own, Trever.' as we began to entertain ourselves with talk of books and philosophy while a knight had arrived unnoticed by myself till he spoken two words, that sent a chill down my spine,

'Black-rock...' and like that, my attention snapped to this knight in a light-maroon colored tonic. 'Sir Jake' I would later learn.
'I know of many secret places.... one filled with black-rock, like the metal-head spoke of...' under, Frank's black-as-night mask I could see his lips curl into a sly smile, '... would you like to see it?'. With a wave of his hand he opened a Silver gate (which, in my reading believe to be a gate through time) and gestured for us to enter... 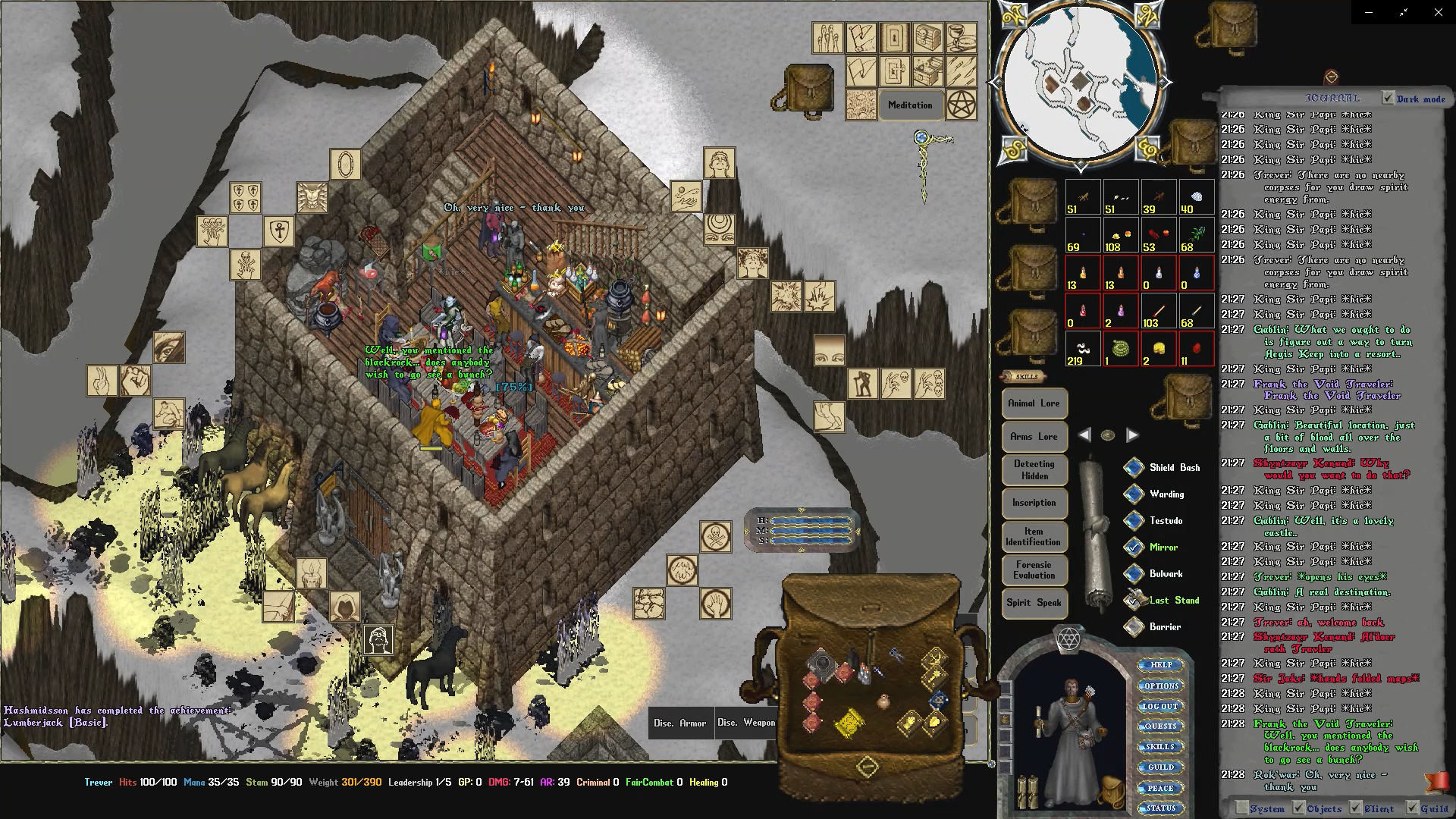 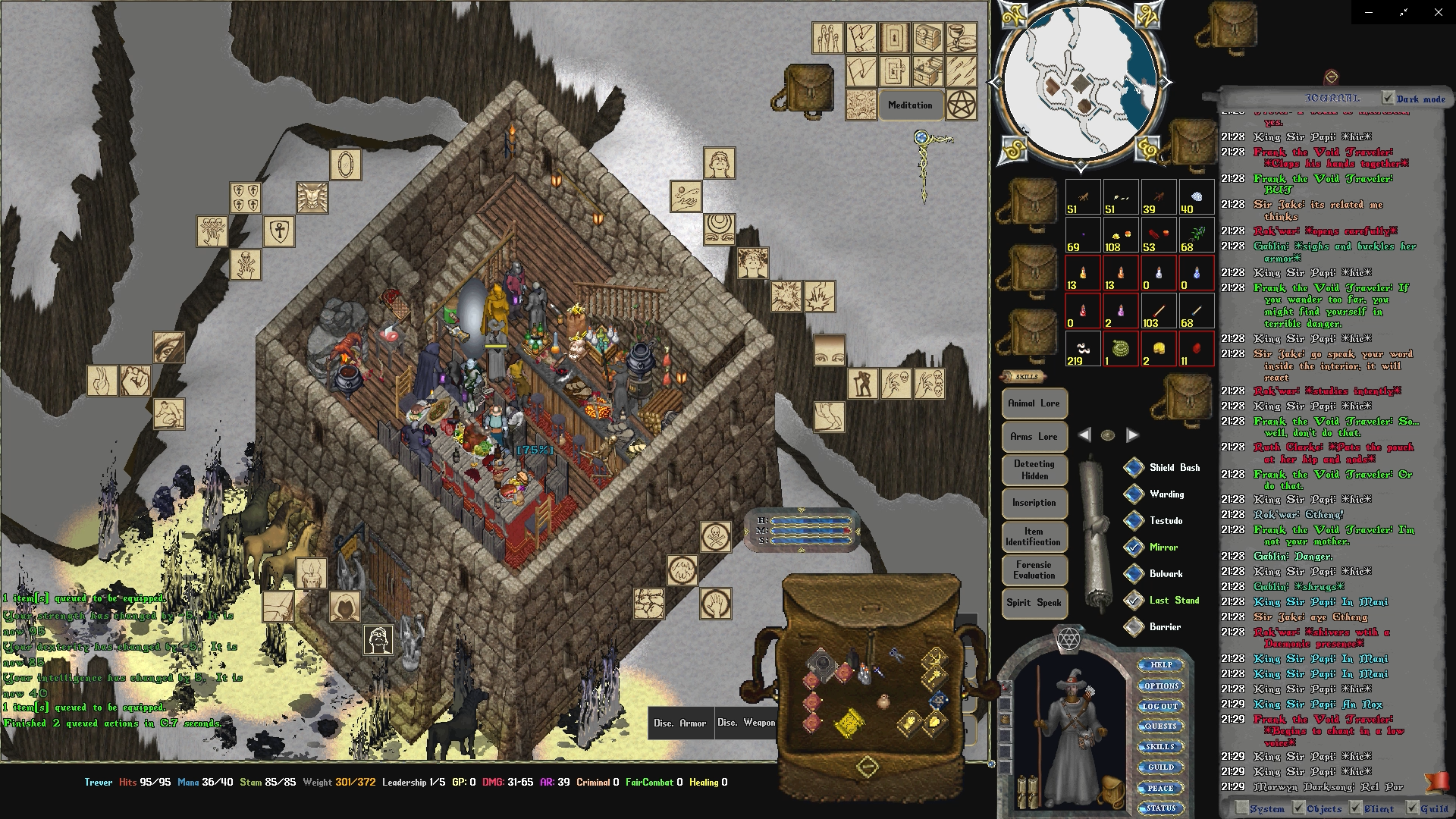 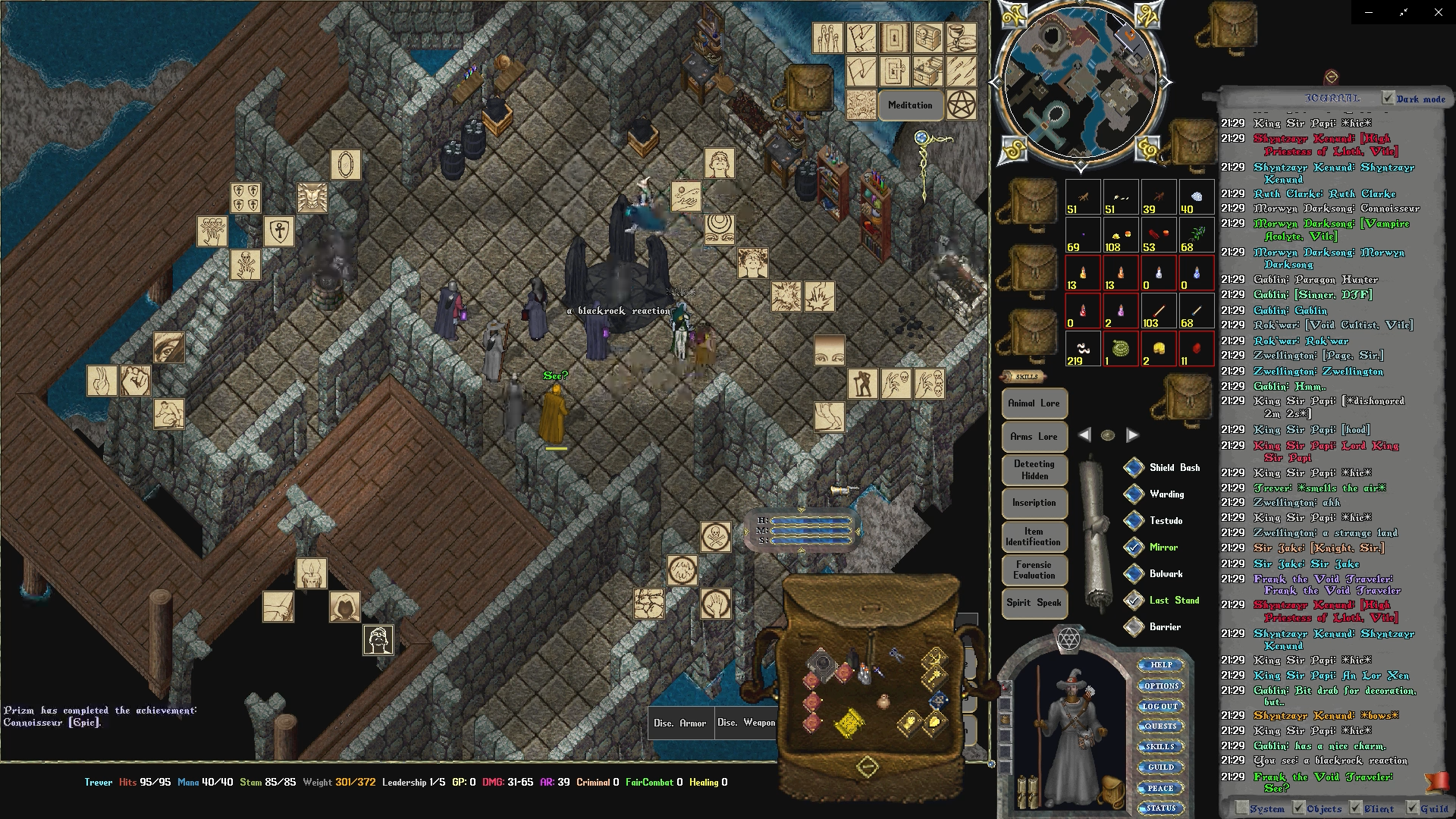 I could not say were we went, but it was someplace dark, cool venturing towards cold, with the sound of slow running water. But that was not what, Frank had lead us here to see. On the first floor of this submerged tower-in-the-earth sat an alter with three shadowy figures; black-rock on it's surface. Much of the area was a labority for this mysterious substance... Indeed, it lay in abundance everywhere in many forms: liquid, solid, exploding into vapor. However there were no forges I could see. I guess that this 'rock' is heavily affected by magic, and magic alone.
On the top level of this tower, Frank opened another gate, having shone us this place and looking to take us elsewhere.
After stepping through another silver gate we found ourselves in... a most dangerous place. Fire traps, advanced tinker machines that seemed more advanced than any I had ever seen. And cultists that seemed to be a mixture of man and machine... but perhaps they were machines to look like men?
The danger was great, and of all of we who followed, Frank: Sir Papi, Lady Morwyn, Sir Jake, Lady Gablin, Shentzayer Kenund, Rok'war, Harkon Ubel, Lady Lunette Dawnstar, Lady Ruth Clarck, and even the beggar Zwellington all endured the next several hours in pain, and fading life. Still.... we ragged group of law men, and agents of chaos held fast and delved deep into this mechanical tomb. 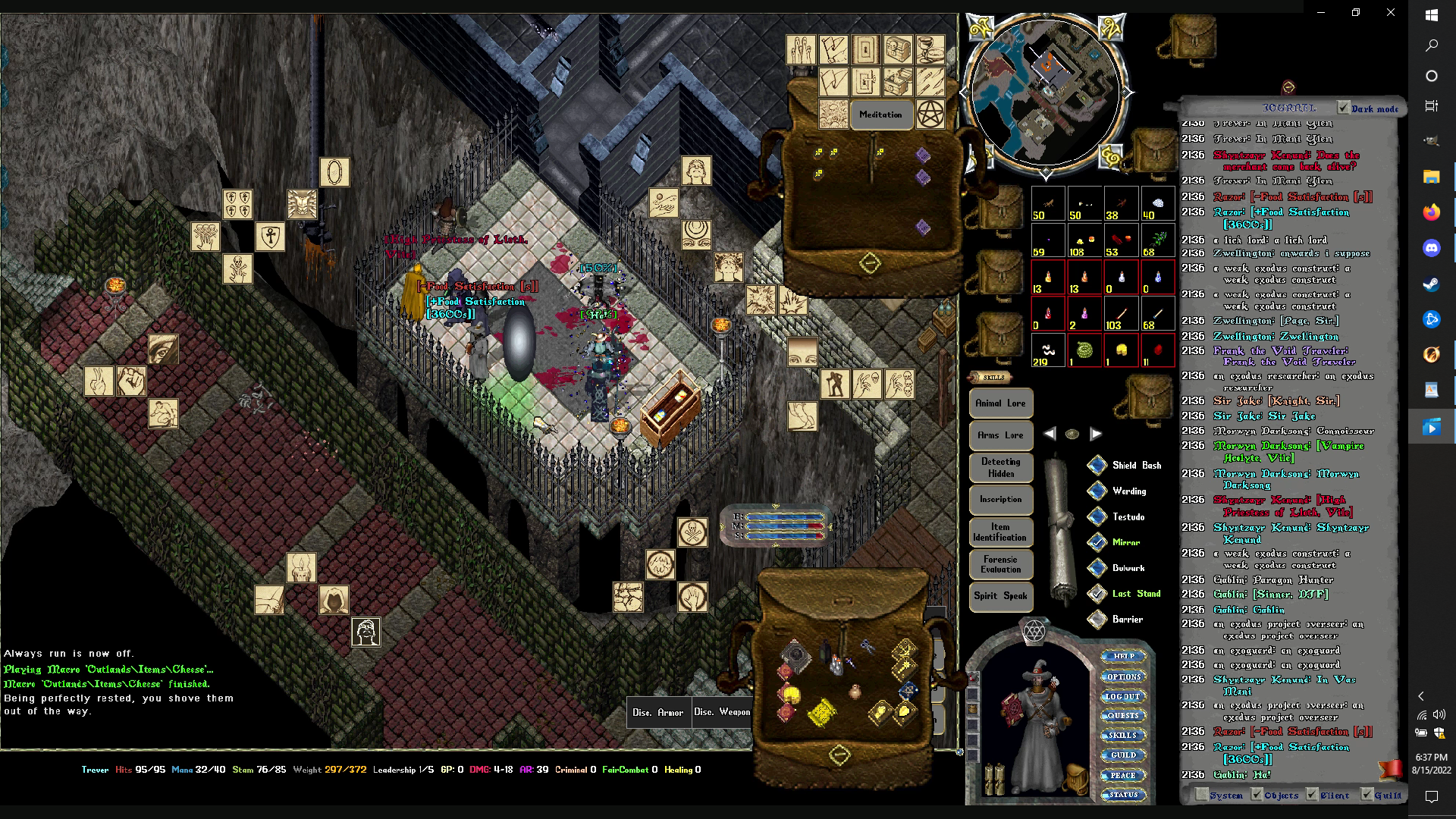 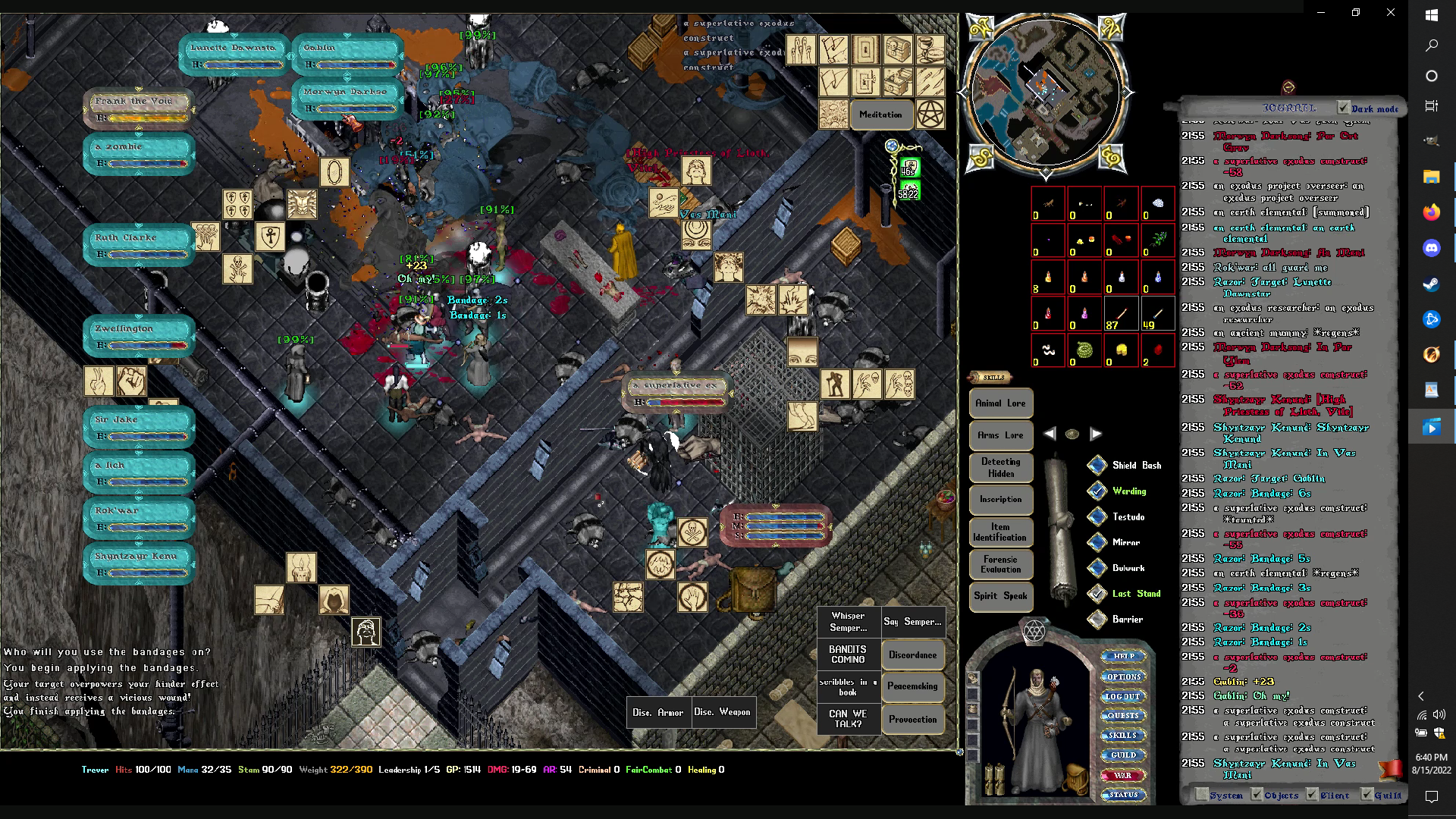 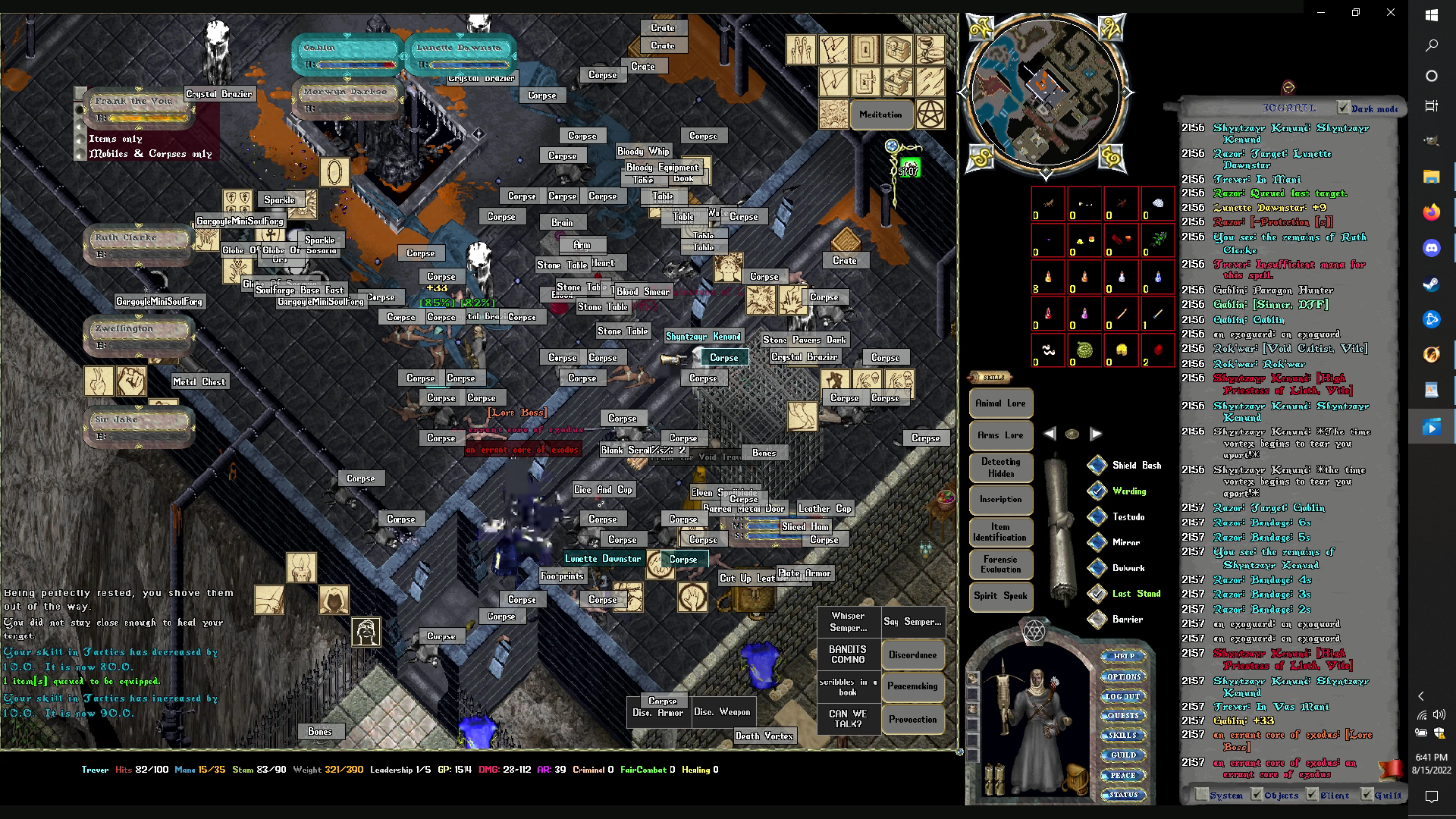 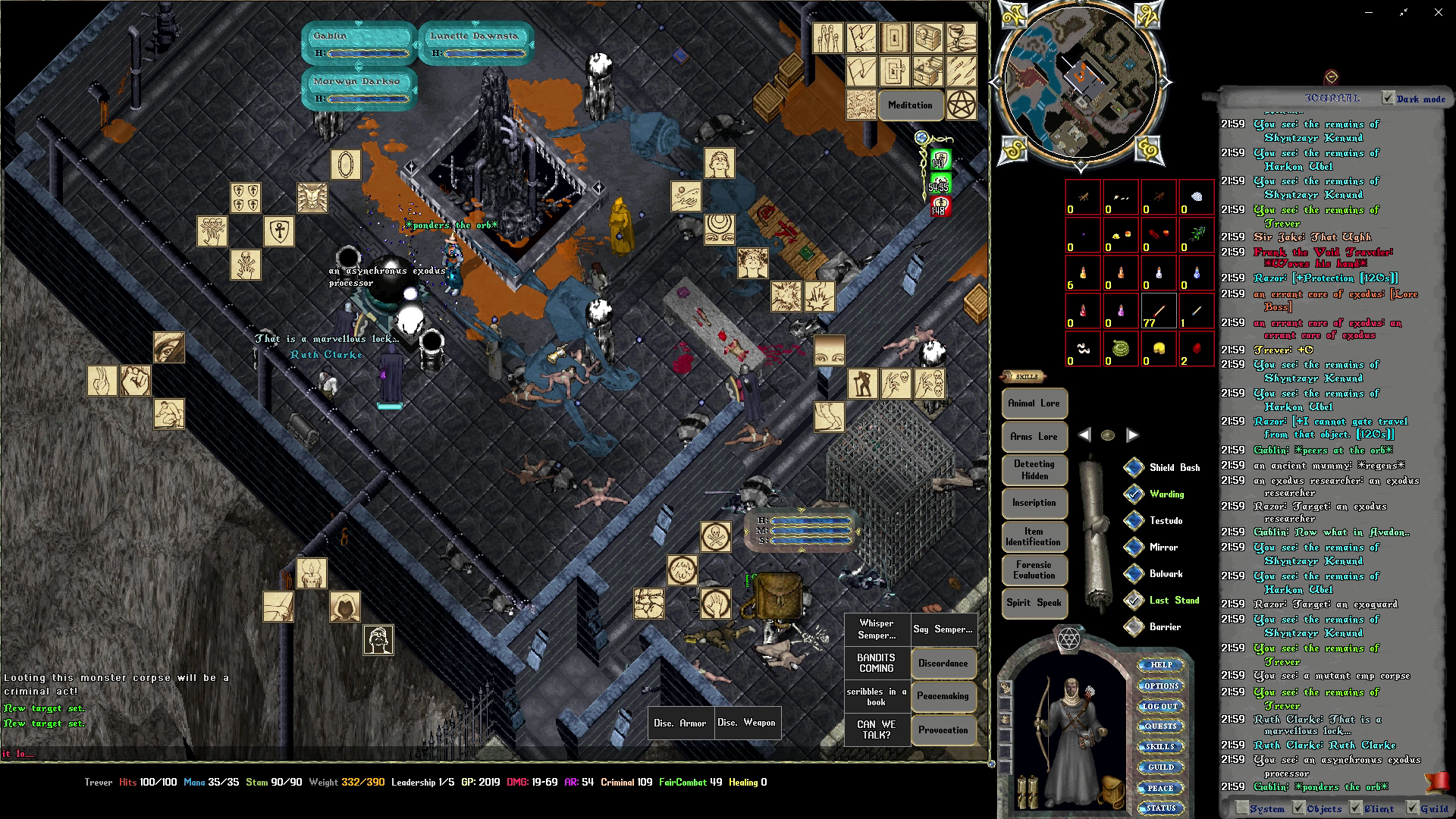 Of the greatest treasures I could find were four books that I have since added to my personal library which I will discuss later.
Machinery aside, the very fabric of time seemed to rip and tear at our bodies & minds as though the element of 'Tyme' was damaged or breaking. But the gravest threat seemed to be caged almost immediately. A hulking thing of metal that stood ten or more feet tall! Before it could assault us however it vanished... and re-appeared inside of what looked to be a holding cell.
In the room beyond, a vast room and for obvious reason: to house the monstrous-sized machine that lay within it. A thing of grand sized parts looking very much like the orb of the moons. I get the feeling that these things are inter-connected, but I cannot say how.
That was the place I found the first of the books I mentioned (though, having meditated on it, I found looking back through my memories I have missed another in that room). A book written by a student about his mentor, a Sir Cabirus.
Sadly I have only volumes I & VIII and I cannot tell all there is about this man. Of what I can tell is he thought to lead the peoples, all of them, into a grand civilization by founding a township in the depths of the, Abyss itself. Not reserved solely for men, but for all peoples that would be willing to live together in peace: goblins, lizard-folk, ogres, trolls... anyone was welcome as long as they would live together in peace. And while I do think it was a noble goal, I feel I see something inherently flawed in his course of action.

I don't believe the virtues to be bad for one that wishes to learn them, but to -force- them onto another people is to take away the very spirit of that people. Are orc-kin still orc-kin if you demand they give up their shamanistic ways and force them to follow human ideology?

I say resoundingly, 'no.'

And... perhaps that is why the place lay in such ruin upon it's discovery. 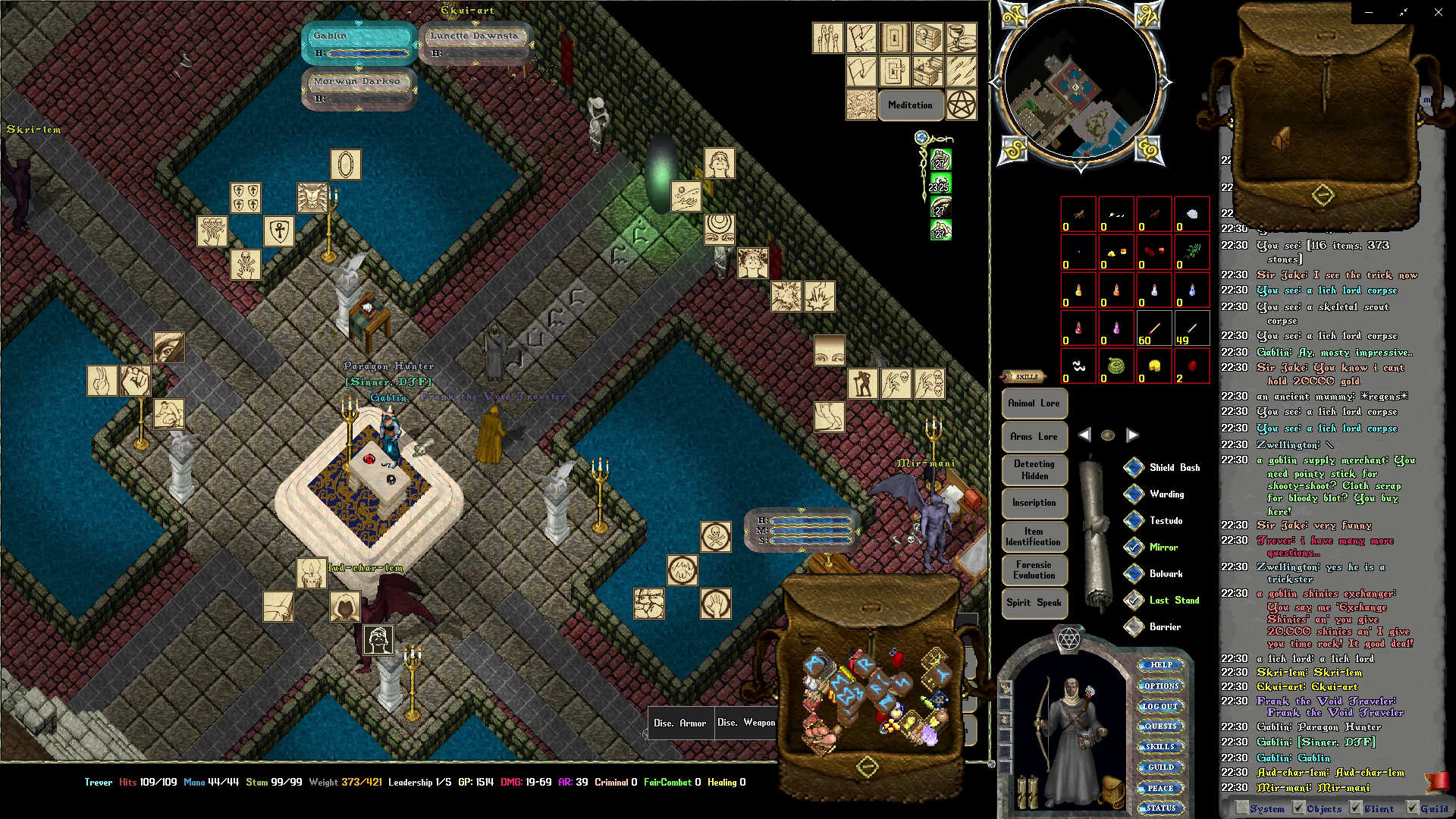 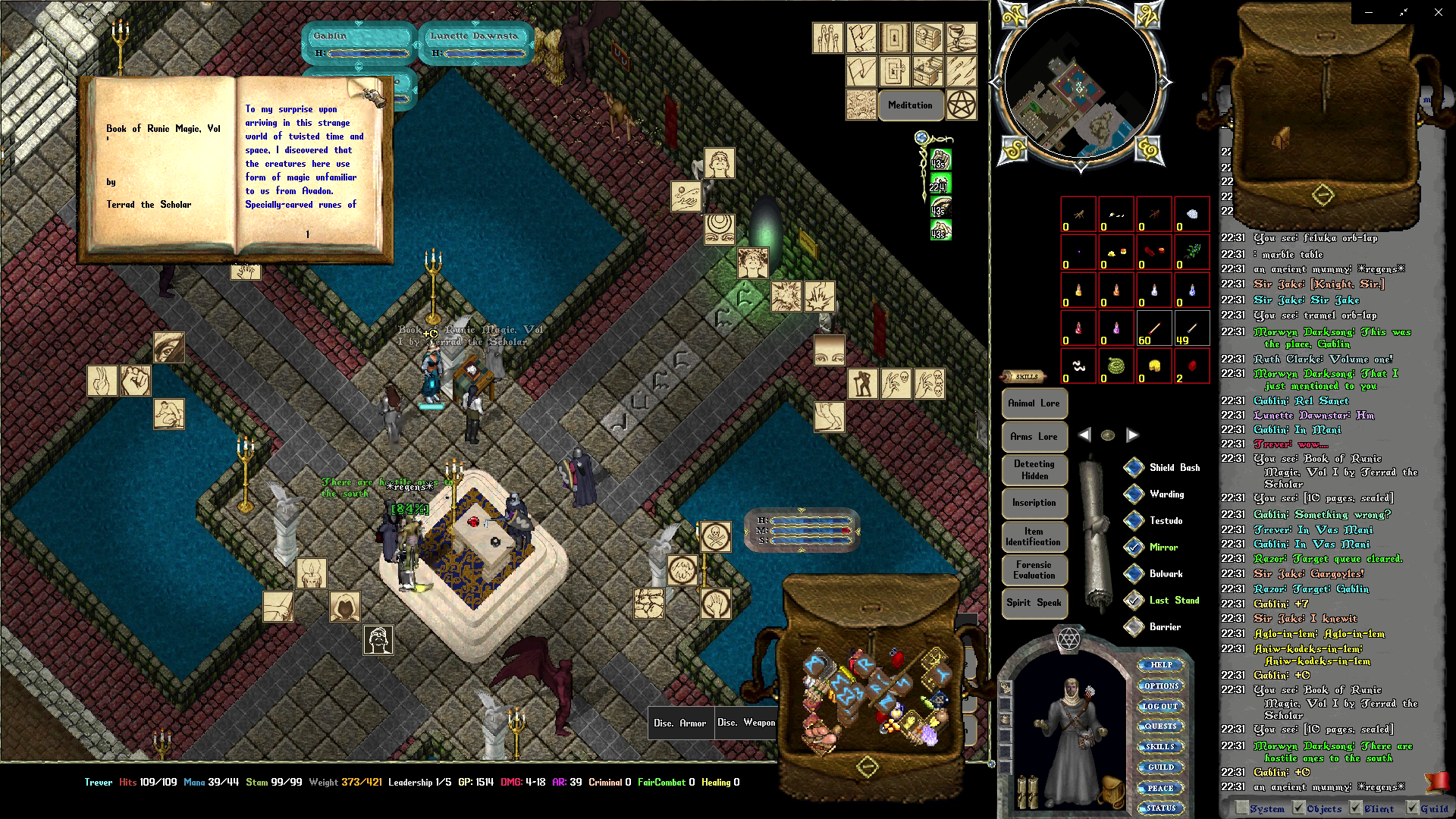 After much hardship in that mechanical hell, a shifty goblin merchant, a huge silver serpent, and a few procured tomes on 'Runic Magic' we found what I believe to be that place, Sir Cabirus thought so surely of; buried deep in rock and earth...
But the only peoples there were gargoyles. While I did reach out to them in what little gargish I do know, they answered back in the typical human common-tongue. It was an grouping of residences where lived a gargish scribe, smith, warrior, and others.
They were more than happy to trade for coin, so my comrades-in-adventure resupplied before, Frank lead us through yet another silver gate that exited just south of, Prevalia; enclosed by a circle of stones.

And while this is all that the adventure has to tell, the four books I mentioned have so much more:

The two tomes I mentioned of, Sir Cabirus, as well as, 'Runic Magic' by, Terrad the Scholar volumes I & III

I will close by sharing a bit more of, Sir Cabirus, specifically volume VIII... perhaps even a clue as to how it all fell apart, beyond my own musings.
Within this tome are references to many of the things one might find in the, Abyss or settlement, and all end with the same thought whatever the subject of debate:
deformed... lesser than... wretched...

Regardless of the entry the attitude of what is being discussed comes from the opinion that it would either not exist, or be killed until it -is- gone even if hostilities could be avoided by simply avoiding them. Even if that creature spoken is of such weakness to render it merely a nuisance.

And with such xenophobic, aggressive thoughts is there any question while other peoples looking outward at us would doubt our vision of "peace"?