#1
Hi, been following the stealing skill changes closely and first I want to say I think it's headed the right direction "on paper".

When tested in-game though I feel like it's a bit harsh on the thief :

They steal from hiding, there is 3 players in the vicinity (2 thieves and 1 innocent to steal from).

They steal 1 bloodmoss and 1 sulfurous ash (not in a stack, single item) 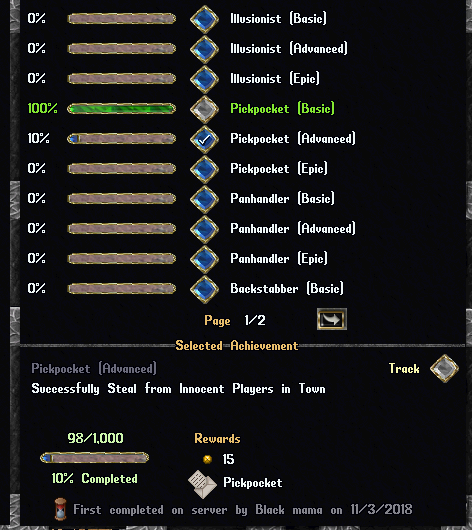 For 3880 attempts on a single reagent one GM thief with the Hiding bonus get around 350 success.

The other GM thief got roughly 750 success out of 3880 attempts.


I think it should be addressed ! With GM stealing I expect to be able to steal <1 stones consistently.

Just compare the skill with any other GM skill and the success chance on (easy) targets ( low end craftables , peace or low level mobs, magery with low levelcircle) and think about how it would feel odd if you fizzled a circle 1 spell with 100 magery 75% of the time.


I think weight is what Stealing skill should be worked around ( NPC and Players in the vicinity reducing % chance is a good idea).
If a 100 stealing thief try to steal a 10 stones items then yes I expect to fail 90% of my attempts but on a weightless item it should be "trivial" for such a skilled thief.


Snooping : I thought the last past fixed the "failed to open" at 100 snooping.

This is game breaking for any "mugger".

GM snooping should ALWAYS succeed in opening a container no matter what .


Sorry for the long post, It may sound like I want to make thieves more powerful but if implemented correctly this would make it actually harder to steal unnoticed and actually give a GM thief the feeling they are indeed grandmaster pickpocket when trying to steal a single gold coin.

#2
Disregard the post , apparently the patch notes I have read was for an upcoming patch.
Now that it's patched, will repeat the same experiment.

Using the same setup I stole from an innocent in town for about 8 hours and the results are way better!

Both thieves got around 1500 succeeded thefts which "feels" more in cue for a 100 stealing character.
So good work on adjusting the skill.

Now i've noticed something weird about the criminality system.