#1
Last Thursday, the Vaengr of Vell descended once again upon the desecrated Cathedral of St. Francis for a black mass. In attendance were only two other onlookers: the pathfinders Avalon Alduin and Bob Vance, for no one else was brave enough to attend such a gathering.

The ancient ghoul Elyzira's sermon involved the story of the Germ of Differentiation: a tale of how the Void was disturbed, giving rise to order and even time. Following this lesson, Elyzira recited the Follower's Oath and invited anyone present to drink from a goblet filled with undifferentiated matter. It is said that this matter is a reflection of the Void's true essence. Eodin, a vampire among the coven's ranks drank deep and described the sensation as "tingly". Etheng!

It was then that Elyzira called upon her assistant Xenvelen and a young woman from Prevalia to join her before the altar. The young woman had been fooled into thinking that she was attending a séance. It was only when Elyzira commanded her trusted assistant to take the young woman's life, in the name of the Void, that the young woman realized her naivety. She pleaded for her life, as her skin blistered and boiled from flamestrike and energy bolts. The pathfinders watched in horror before bolting for the exit.

The Void was pleased!

After the mass, coven-members Elyzira, Xenvelen, Eodin, and Diedrick Kastner decided to spread some chaos by desecrating the cathedral at Haven. 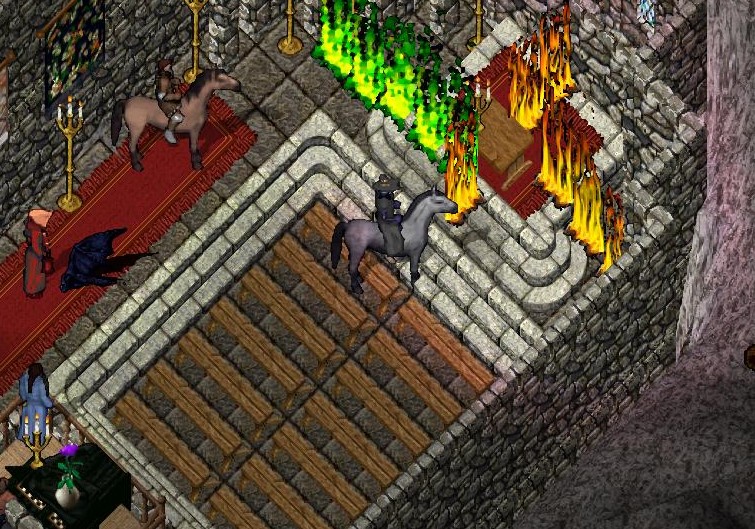 A pathfinder was toyed with and eventually slain, after which her body parts were used to adorn the altar. 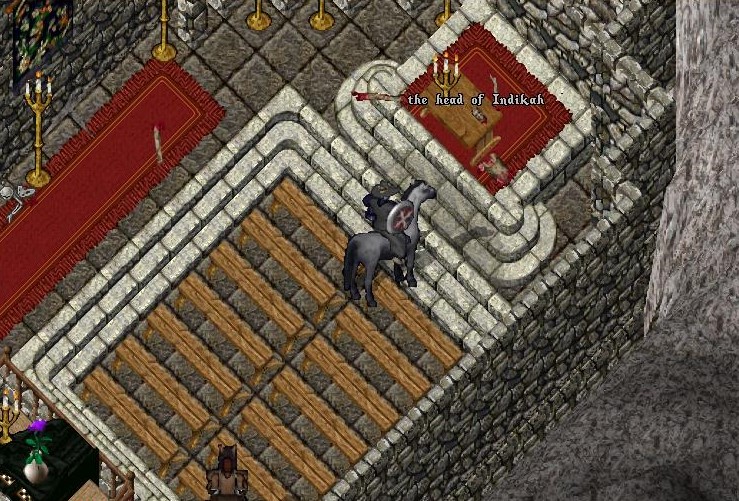 And a peacekeeper was given a personal taste of the Void. 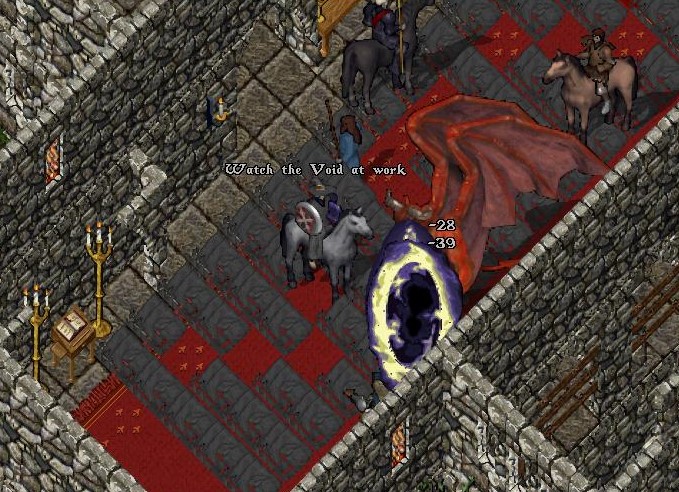 More pathfinders arrived and promptly cleaned up the cathedral, while threatening the coven members with some foolish notion of justice. But the rangers can only threaten death in their narrow worldview, and the VOV have no fear of such thing, for they have broken the cycle of life and death and gladly welcome Oblivion.

Satisfied, the coven opened a moongate leading to the frozen waste of the North. For good measure, Elyzira threw one last body part of the fallen Pathfinder onto the altar and stepped into the gate, her cackling echoing throughout the desecrated halls of the cathedral.
Last edited: May 5, 2020

#2
a journal entry by Avalon Alduin
629 AC
It was a chilly night.. I’d caught wind of an unsanctioned event, which had captured my curiosity however, so I road forth to the chilly northern town of Outpost, to look into the rumor.

Far west along the road, just over the underpass, to where the 8 rocks lay, inside a deadwood grove with a candle standing watch over each.. I couldn’t help but note the significance, of the number 8.. the virtues.. Perhaps those lectures from Father Enoch were sinking in..

A gate was sitting open, directly in the center, was there a significance in that? I pondered the thought momentarily, before taking my chances and stepping through the gate.

I arrived in front of a large cathedral, the stench of death was strong, clouds of pestilence floated in the air, I felt as though I were trespassing, though my curiosity would not allow me to turn back. I wandered in through the large doors, to a grand hall, and in front of my eyes, a coven of undead creatures, the Vaengr of Vell. A moment of brief fear passed me by, the hunger in their eyes, their nonchalant laughs, as a human approached, but once again curiosity got the better of me.. It was then I saw Bob Vance, beaming proudly, I could tell he saw this as some sort of discovery of science. Taking comfort in having my good friend there, and his beloved Greenlee – silly candle – we quickly took a seat in the back pews.

As the sermon began, the priestess? began talking of the Void, what it was, and of the disturbance, such that caused the infinite expanse to become distinct, acquiring order. These concepts were foreign to me, having always lived in order, however it was something to note for future study.

It was then the sermon turned dark. For order brought life, with untold suffering, for that was our fate as the living.

The priestest had embraced the Void, and before my eyes, an innocent was brought forth, along with another member of the Coven who had stepped forth to receive.. a blessing?

Much of what happened next, I truly cannot properly recount, it happened so fast, she screamed a Void bubble appeared, the Coven member attacked, I muttered the words In Vas Mani – to try to save her, but in my shock, I was too late.

Bob and I looked at one another, and made quick haste in sneaking out the back of the Cathedral.. We said few words to one another, what was there to be said, their numbers were many, there was nothing we could have done.

Later that evening, I snuck back to the cathedral, ensuring I was alone, I searched the grounds and found the chalice, still intact, filled with.. the Void, a swirling sense of energy emanating from it. There was little more I could discover of its magical properties. Perhaps I did not know how to trigger it. I would have to reach out to Bob later, knowing he’d have come to find the science behind such things.

Farther back in the hall I found a large orb, that swirled in mesmerizing fashion, when I touched it, I could see deep into a vast emptiness of power, and chanting filled my mind.. I was lost there for a moment. I am not sure for how long. But once I came to, I rushed out. I would recommend to approach this place with caution.

I was left with few answers, and many more questions. Most importantly, what were these Vaengr of Vell up to, and what was this Void.

This would require further research. 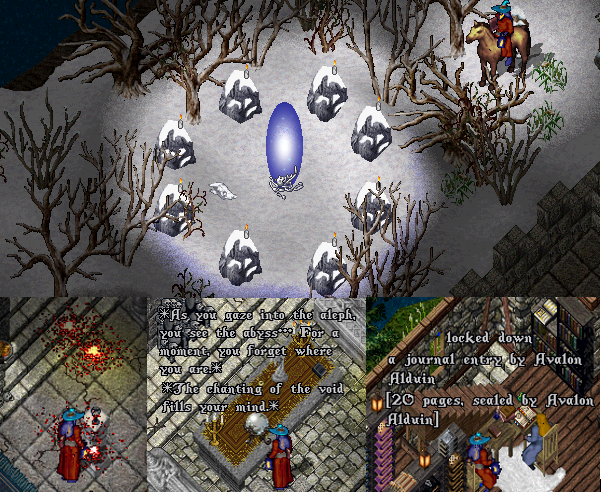 #3
Unable to sleep after witnessing the slaughter of an innocent woman, Bob Vance and Greenlee return to the scene of atrocity. Science demanded that he decipher the truth behind the liquid in that goblet which offered the means to "Reject Order" and "Create Chaos". There must be something more to it than that. 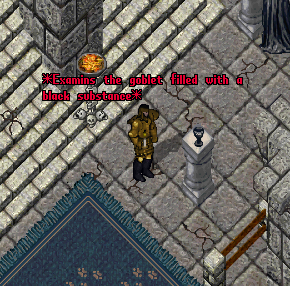 A thick black substance still filled the cup. It seemed to absorb light, but looked as if it also contained the stars of the cosmos. 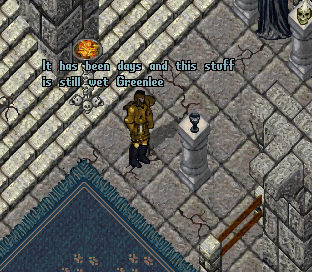 Greenlee, the candle which never leaves Bob's side, seemed to flicker in protest to the idea of returning to the desecrated cathedral.

"You're never any fun Greenlee, besides think of what we can find out about this....goop?"

Bob stared at the dancing flame nodding his head in acknowledgement.

"Valid points, but that isn't stopping us." 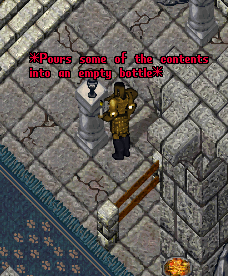 "See now, safe and sound you weenie. I told you nothing would happen."

As the cup was set back on to the pedestal, eerie moans blasted through the Cathedral, and the air surrounding Bob and Greenlee started to pop and crackle. 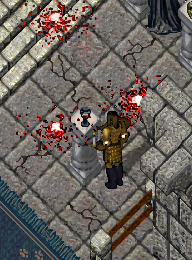 "Oh, that isn't good. Maybe it is time to take our leave"

Greenlee flickered in approval. As Bob turned to make his way out he stumbled on a femur bone that laid on the floor unnoticed, and dropped several of the explosion potions that he kept in the many pouches of his armor. 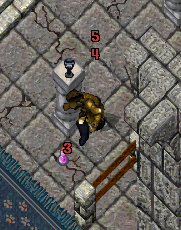 The explosion roared through the Cathedral and all of its hallways. Over some time the echoes of the explosion fades, and the dust settles. Bob lays on the floor unconscious still clutching on to Greenlee.

Bob is floating in blackness. He calls out, but only hears a slowly waning echo of his own voice. A few attempts were made to place his feet on a nonexistent floor where he stretched his legs as far as they could reach, even pointing his toes down to see if there was any form of traction, but nothing. Surrounded by nothingness. Fear struck his face as he frantically looked for his missing companion with no success. The silence of the nothingness triggered Bob's tinnitus. Years of setting off explosives had not been kind to him. The ringing grew louder and louder. So loud that his own inner monologue was drowned out by the piercing sound.

After what felt like hours of listening to the maddening tone, it started to give way to a ghoulish moaning. As the sound became more prominent, a swirling cloud of Void encroach closer to the floating man. He tried to turn and run, but nothing. Desperate to escape, Bob even attempted to swim away with no success. Floating there he watched in horror as the swirling mass of cosmic Void creeped closer and closer without a means of escape. Unwilling to give into what seemed like his doom, he popped the corks off of several explosion potions, and used platinum wires to bind them together. "Time for some fireworks"

Waiting to trigger his trap, Bob heard something akin to a battle cry behind him amidst the ghoulish moaning of the Void. He turned to look towards the new source of noise to see a pulsating light quickly heading towards him. Instinctively, he detonates the trap. Being in such close proximity he could feel the heat searing his face. He did what he could to protect himself, but the flame's heat was unbearable causing him to scream in pain.

Screaming, hyperventilating, and clawing at his face, Bob sat up regaining consciousness. He took a moment to get his bearings, and found Greenlee on the floor next to him, still lit, and on its side. Somehow it managed to come between him and the goblet of Void substance that was slowly oozing towards where the tinkers face was. He gathered up Greenlee, his scattered and scorched belongings, the bottle of the goblets contents, and made his way home.