A continuation of the following:
https://forums.uooutlands.com/index.php?threads/sinfols-story-part-1-bloodthirsty-brothers.3727/


Sinfol’s brow curled and he shook his head. He looked happily surprised but confused. “I am glad that many more of you decided to join in and share your stories but can’t help but feel like I was in the middle of my own.” Sinfol said with a jovial look on his face. “Now, where was I?”

"Ah yes! The joy of killing Anne Flank was a high like no other and soon enough I was a murderer with a reward out for my head."

A saddened look drew upon the tamers face. "Something was wrong though. No kill seemed to feel quite as good as the first. In fact, most filled me with guilt. It made me sick to take the life of an innocent who did nothing but hunt monsters. It became so bad that I started having visions of my victims’ ghosts by their corpses. Almost as if they were haunting me." Sinfol stopped and stumbled over to the trash barrel. The sounds of him vomiting and weeping were often laughed at, others thinking he was just a crazy drunk. Tonight, however was a quiet and somber response.

There was no change in Sinfol's behavior though. He was quickly done, grabbed another bottle of ale and continued talking as if he had not stopped. "What was wrong? Why did these other kills feel so different? I couldn't understand but I knew I could not go on like this. I locked myself up in my home and spent my time considering my sins. I lost count of the days, but when I finally let myself back into the world it felt like so much time had passed that others had forgotten about my heinous deeds. Not me though. I can never forget what I did. An eternity of good deeds will never fully clear my conscience." 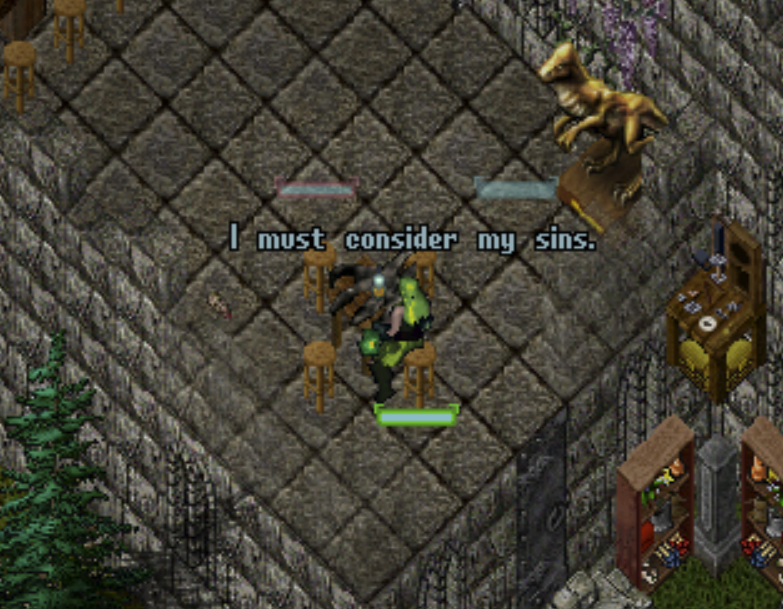 "I knew that I could not return to the life of crime, but I felt lonely and lost. I went back to my old life, but my time hunting monsters in Avadon felt incomplete. Something was missing from my life and I could not figure out what it was."

"Days passed and I was growing bored. Every adventure to a dungeon felt like it had less meaning than the last. One day a friend, Maus Puppeteer, invited me to join him for some hunting in Cavernam. I was at the brink of quitting my adventuring but it was always better with a friend, so I joined him."

"We fought our way through many foul creatures and were just about to do our rounds of hunting daemons when a magician with five husk crabs ran up to the monster we had slain and stole our loot. Maus Puppeteer being a bard and I having no way to heal but potions were in no way equipped to fight this mage, but neither of us could sit back and let them harass us. It was a terrifying battle. The mage had me gravely injured as a barbed prowler appeared at my side. Maus began playing an inciting tune and I shouted, 'What are you doing? Why is that thing chasing me?' As I scrambled between the mage and the prowler."

"He shouted back with a grin 'It's not chasing you!' Just as a torrent of barbs flew from the prowler into the mage. This was it! As the mage's corpse lay on the floor, I felt that same rush I had from my first kill. It was not the act of killing that gave me the rush, but something else. Something about putting an ass in their place. Teaching those out to harass others that I was not going to put up with the grief."

"Perhaps I could still find some joy in this life, I thought to myself...." Sinfol paused for a while, "but what about my brother? How could I seek to fight murderers and griefers and still have good times with him? He is known throughout Avadon, and not for righteous reasons."
You must log in or register to reply here.
Share:
Facebook Twitter Email Share Link
Menu
Log in
Register